National Emblem of the People's Republic of China

The National Emblem of the People's Republic of China (simplified Chinese: 中华人民共和国国徽; traditional Chinese: 中華人民共和國國徽; pinyin: Zhōnghuá Rénmín Gònghéguó guóhuī) contains in a red circle a representation of Tiananmen Gate, the entrance gate to the Forbidden City, where Mao declared the foundation of the People's Republic of China (PRC) in 1949. Above this representation are the five stars found on the national flag. The largest star represents the Communist Party of China, while the four smaller stars represent the four social classes as defined in Maoism. The emblem is described as being "composed of patterns of the national flag":[1]

...The red color of the flag symbolizes revolution and the yellow color of the stars the golden brilliant rays radiating from the vast red land. The design of four smaller stars surrounding a bigger one signifies the unity of the Chinese people under the leadership of the Communist Party of China (CPC)

The outer border of the red circle shows sheaves of wheat and the inner sheaves of rice, which together represent agricultural workers. At the center of the bottom portion of the border is a cog-wheel that represents industrial workers. 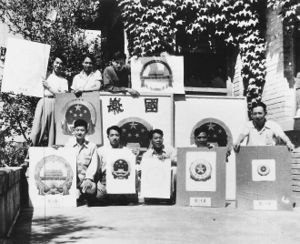 On July 10, 1949 the government held a public competition for the design of the national emblem, however no satisfactory designs were selected. Therefore on September 27, 1949, the First Plenary Session of CPPCC decided to invite designers for the proposals of the national emblem and two groups were selected in September 1949. One group was from the China Central Academy of Fine Arts: Zhang Ding, Zhang Guangyu, Zhou Lingzhao, Zhong Ling, and the other group was from the Department of Architecture at Tsinghua University: Liang Sicheng, Lin Huiyin, Mo Zongjiang, Zhu Changzhong, Li Zongjin and Gao Zhuang. The design selected for the emblem was mainly based on Zhang Ding's proposal. The design proposed by Lin Huiyin, a jade disc with a large star in the center, was finally rejected.[3]

It was decided that the emblem would contain the design of Tian'anmen Gate on June 10, 1950.[4] Two groups then worked in a second round on designing the details of the emblem. The group from Tsinghua University, led by Liang Sicheng and Lin Huiyin, standardized the design of the Tian'anmen Gate on the emblem and selected red and yellow as the main colors.[5] Their draft was selected and the design was standardized and simplified by Gao Zhuang.[6] This design was officially made the national emblem on 20 September 1950 by the Central People's Government.

In April 15, 1985, Taiyuan City officially announced its emblem, becoming the first city in the People's Republic of China to have a city emblem.

Hong Kong and Macao have their own emblem. The National People's Congress have passed the standardized use of the two special administrative regions' emblems.