National Express Group plc (LSE: NEX) is a British multinational public transport company headquartered in Birmingham that operates bus, coach, train and tram services in the United Kingdom, United States, Canada, Spain, Portugal, Malta, Germany and Morocco and long-distance coach services across Europe. It is listed on the London Stock Exchange and is a constituent of the FTSE 250 Index. 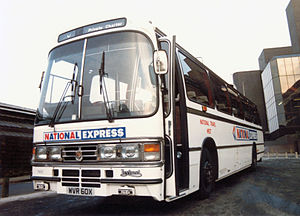 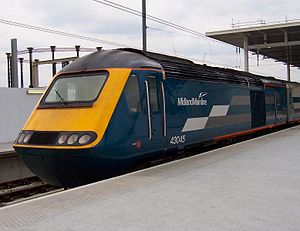 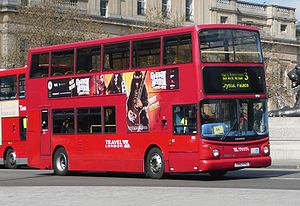 In 1972 the state owned National Bus Company decided to bring together the scheduled coach services operated by its bus operating companies in the United Kingdom under one brand. Sir Frederick Wood, a prominent businessman and industrialist, was asked to oversee the creation of this new business model and led the group as its chairman from 1972 to 1978.[2] Initially branded as National, the National Express brand was first used in 1974.[3][4] The National Express network was largely a branding exercise, with services continuing to be operated by the individual companies.

With the privatisation of the National Bus Company in the 1980s, National Express was subject to a management buyout in March 1988. The management team began to diversify, and in 1989 purchased Crosville Wales[5] but its financial performance began to deteriorate from early 1990. A new management team took over the company in July 1991, with the backing of development and venture capital investors. The new team refocused the group on its core activities and sold Crosville Wales to British Bus.[6] In October 1991 it purchased Speedlink, an operator of coach services between Gatwick and Heathrow Airports.[4] In December 1992 National Express Group plc was floated on the London Stock Exchange.[3] The prospectus stated the objectives of the company were to refocus and improve the profitability of the core coach business, to develop new products and services within its existing operations, and to acquire new businesses in the passenger transport market.

In April 1996 National Express commenced operating its first UK rail franchises, Gatwick Express and Midland Mainline. Other franchises won in 1997 were Silverlink, Central Trains and ScotRail. To comply with a Competition Commission ruling on it winning the ScotRail franchise, National Express sold the Scottish Citylink operation to Metroline in August 1998.[10][11]

In September 1998 Crabtree-Harmon, the seventh largest student transportation bus company in the United States was acquired, with 82 school bus contracts mainly in Missouri, but also in other Midwest states including Colorado, Iowa, Kansas, Oklahoma and Utah. In February 1999 Robinson Bus Service was purchased followed in August 1999 by Durham Transportation. These acquisitions placed National Express as one of the top three United States school bus operators.[13]

In December 2002 National Express handed in its Victoria rail franchises having been unable to renegotiate financial terms with the State Government.[22][23]

In June 2005 the London bus arm of Tellings-Golden Miller was purchased and also rebranded Travel London.[30] In July 2005, National Express sold ATC to Connex.[31] In October 2005 National Express agreed to buy most of operations of privately owned Spanish transport operator ALSA, which operates bus and coach services in Spain, Portugal and Morocco, and long-distance coach services to other parts of Europe. Alsa's operations in South America and China were retained by the previous owners.[32] 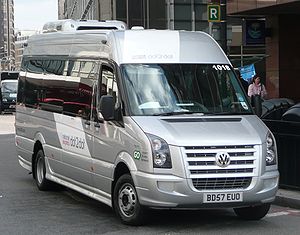 Dot2Dot Volkswagen in London in April 2008

In November 2007 South East England coach operator The Kings Ferry was purchased[34] and an airport to hotel shuttle service in London branded Dot2Dot was launched.[35] It was not successful and ceased in November 2008.[36]

In November 2007 National Express announced plans to re-brand all of their operations under a new unified National Express identity.[37] It was intended to achieve greater recognition for all the group companies, to coincide with recent acquisitions and after current rail operations had improved in reliability to warrant association with the established express coach image. It coincided with the appointment of a group director for all UK operations and relocation of the head office from London to Birmingham, bringing all operations under a single strategic management structure. Day-to-day management remains within individual companies.[38]

In January 2015 the Bayerische Eisenbahngesellschaft announced that National Express will operate the Nuremberg S-Bahn system from December 2018. It will the first Deutsche Bahn S-Bahn network to be taken over by a private operator, all today's private S-Bahn lines in Germany were completely new. It was also announced that the network, which will include the Allersberg-Express, will be operated with Škoda 7Ev trains, built by Škoda Vagonka. These EMUs will replace the older trains with Class 143 locomotives and x-cars and the newer Talent 2 EMUs.

On 16 June 2015 it was announced that the parts 2 and 3 of the Rhein-Ruhr-Express which will be introduced in 2018 will be operated by National Express. This include the today's Regional-Express services RE4, RE5 and RE6 in Northrhine-Westphalia.[43] 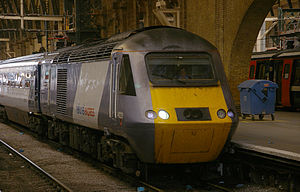 On 1 July 2009, the Department for Transport announced that it would take the National Express East Coast franchise into public ownership at the end of the year after National Express announced it would not invest any further funds into the franchise, effectively declaring it planned on defaulting.[44]

Further controversy ensued when, on 27 July 2009, the Commons Transport Committee said that ministers should consider operating the East Coast Main Line as a public railway after National Express announced they would walk away.[45] Directly Operated Railways took over the East Coast franchise on 14 November 2009.[46] Also in November 2009 the government announced that National Express East Anglia would not be granted a three-year extension that it had otherwise qualified for, because of the East Coast default.[47]

In July 2009, a junior transport minister, the Gillingham MP Paul Clark, spelt out a series of concerns to National Express in a letter following a meeting with an employee of National Express East Coast who lives in his constituency. The worker claimed that due to reduced maintenance checks, some trains were in use with defective brakes, an allegation strongly denied by the company, which said it would "never compromise on safety". He wrote: "As a result of reduced maintenance checks, 'some long-haul sets [trains] are in use with brake defects'. Increasing cuts in staff combined with an increasing pressure to ensure that trains run safely has resulted in fears among staff that a major accident is 'just around the corner'." Passengers, he added, "have been 'poisoned' as a result of coffee machines not being cleaned correctly, with cleaning fluids left in situ". The minister said he was "shocked and appalled at the information with which I've been provided. You will understand that these allegations are exceptionally serious".[48]

School bus drivers in the US have raised concerns about the safety of the buses run by Durham, a subsidiary of National Express and the second largest operator of school bus services in North America. According to representatives of Durham bus drivers, fluid leaks, tires that need to be replaced, black mold and non-functional emergency equipment are regular concerns, whilst workers continued to operate buses while sick because they cannot afford to miss a day of work and drivers are not paid for all the time they work.[49]

Offers for the company 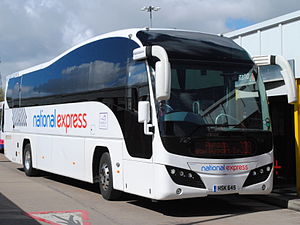 On 16 October 2009 the Cosmen/CVC consortium withdrew their offer.[57][58] with Stagecoach submitting a new all-share bid later the same day.[59][60] This too did not proceed and in November 2009 National Express announced it would raise the necessary capital through a share issue.[61]

National Express' operations are summarised below:[62] 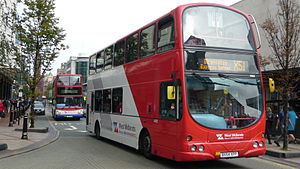 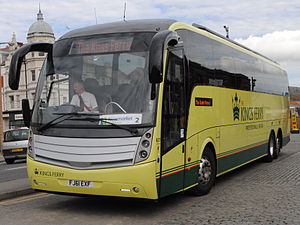 The Kings Ferry Caetano Levante bodied Volvo B13R in May 2013

The bus and coach services operated by the group are:

The railway and tram services operated by the group are: 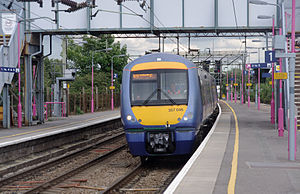 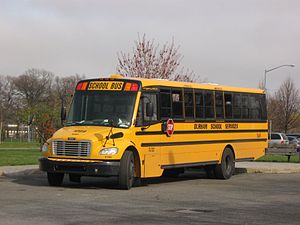 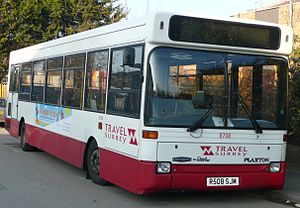 In May 2009 National Express sold some of their bus operations to Abellio: 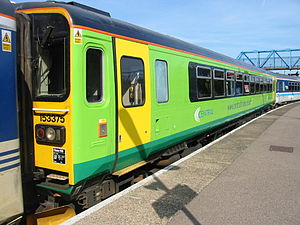 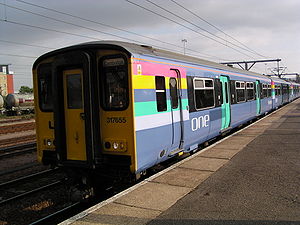 Rail franchises lost in refranchising were:

In the 1990s National Express moved into the privatisation of airports, purchasing East Midlands Airport, Bournemouth Airport, and Humberside Airport. In a move to concentrate on bus and rail provision, Humberside was sold to Manchester Airports Group in 1999 followed by Bournemouth and East Midlands in February 2001.[70][71]

Until November 2007 the group also operated Stewart International Airport in New Windsor, New York. However, the lease was sold to the public Port Authority of New York and New Jersey.[72] 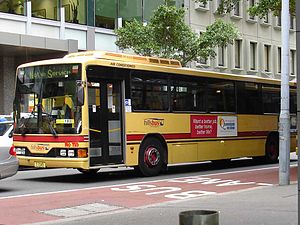 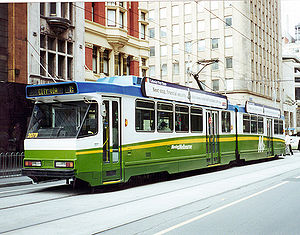 Australian bus companies previously operated by the Group include:

In 1999 the Group gained the Australian franchises M>Train, M>Tram and V/Line Passenger, following the privatisation of rail and tram services by the Government of Victoria. After incurring large losses and being unable to renegotiate the franchise contracts, the operations were handed back to the State Government. M>Train was re-let to Connex and M>Tram to Transdev. V/Line became a government-owned corporation.[73]