The National Gallery of Victoria, popularly known as the NGV, is an art museum in Melbourne. Founded in 1861, it is the oldest public art museum in Australia. The NGV operates across two sites: NGV International, located on St Kilda Road in the heart of the Melbourne Arts Precinct of Southbank, and The Ian Potter Centre: NGV Australia, located nearby at Federation Square. The St Kilda Road building, designed by Sir Roy Grounds, opened in 1968, and was renovated by Mario Bellini and reopened in 2003. The Ian Potter Centre: NGV Australia was designed by LAB Architecture Studio and opened in 2002.[1]

The NGV was founded in 1861. Victoria had been an independent colony for only ten years, but in the wake of the Victorian gold rush, it was the richest colony in Australia, and Melbourne was the largest city in Australia. In addition to donations of works of art, donated funds from wealthy citizens have been used by the NGV to purchase Australian and international works by both old and modern masters. The NGV currently holds over 70,000 works of art.[2] The Felton Bequest, established by the will of Alfred Felton in 1904, has purchased over 15,000 works of art for the NGV.[3]

The National Gallery of Victoria Art School, associated with the gallery, was founded in 1867. It was the leading centre for academic art training in Australia until about 1910.[4] The School's graduates went on to become some of Australia's most significant artists. 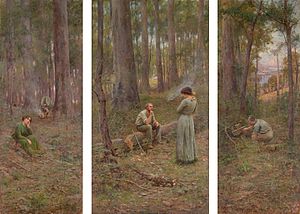 In the late 19th and early 20th century, domestic art began to thrive (particularly with the Heidelberg School in what was then an outer suburb of Melbourne) and the NGV was well-placed to add an excellent collection of key Australian works, which trace the metamorphosis of imported European styles into distinctively Australian art. The NGV houses many of the most recognisable Australian paintings, including Frederick McCubbin's The Pioneer and Tom Roberts' Shearing the Rams.

The NGV has an encyclopaedic collection of art. In addition to the Australian collections, international collection areas include European painting (historical and modern), fashion and textiles, photography, prints and drawings, Asian art, decorative arts, Mesoamerican art, Pacific art, sculpture, antiquities, and contemporary art. It has strong collections in areas as diverse as old masters, Greek vases, Egyptian artifacts and historical European ceramics, and contains the largest and most comprehensive range of artworks in Australia.[5]

In 2011 the NGV celebrated its 150th birthday and acquired a highly important masterpiece by Correggio, one of the most influential figures of the Italian High Renaissance. The work, titled Madonna and Child with infant Saint John the Baptist, was painted circa 1514–15. The painting was purchased at Sotheby's London for $5.2 million and is the single highest priced acquisition in the NGV's history.[6]

In 1967, the NGV established the first curatorial department dedicated to photography in an Australian public gallery,[7] one of the first in the world. It now holds over 15,000 works. In that same year, the Gallery acquired the photography collection's first work, Surrey Hills street 1948 by David Moore[1] and in 1969 the first international work was acquired, Nude 1939 by František Drtikol[2]. The first photographer to exhibit solo at the NGV was Mark Strizic in 1968[8][3]. Jennie Boddington, a filmmaker, was appointed first full-time curator of photography[9] in 1972l,[10] possibly only the third such appointment amongst world public institutions.

Selections from the permanent collection

Note that other notable works are in the collection but the following examples are ones in the public domain and for which pictures are available. A search of the entire collection may be made at http://www.ngv.vic.gov.au/explore/collection/.

As a "National Gallery" 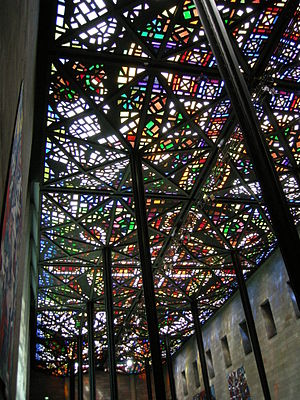 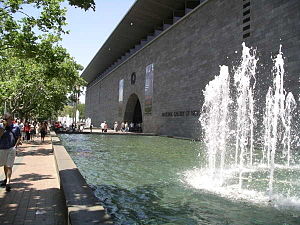 The view looking south towards the entrance to the NGV 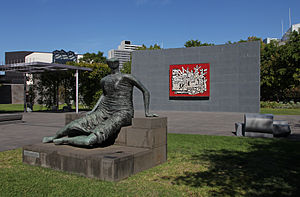 For some people the name "National Gallery of Victoria" is contentious as it is sometimes confused with the National Gallery of Australia (NGA) in Canberra, and there have been calls for the NGV to be renamed. However, the NGV was founded some 40 years before the formation of the Commonwealth of Australia, when Victoria was a self-governing British colony and a discrete political entity. It was also established more than a century before the NGA. According to former Victorian Premier Steve Bracks, "We won't be renaming the National Gallery of Victoria. It has a great tradition. It is the biggest and best gallery in the country and it's one of the biggest and best in the world."

In 1959, the commission to design a new gallery and cultural centre was awarded to the architectural firm Grounds Romberg Boyd. In 1962, Roy Grounds split from his partners Frederick Romberg and Robin Boyd, retained the commission, and designed the gallery at 180 St Kilda Road (now known as NGV International). The building was completed in December 1967[12] and opened on 20 August 1968. One of the features of the building is the Leonard French stained glass ceiling, one of the world's largest pieces of suspended stained glass, which casts colourful light on the floor below. The water-wall entrance is another well-known feature of the building. Grounds subsequently designed the adjacent Victorian Arts Centre with its iconic spire.

The NGV is now spread over two buildings a short distance from each other at the southern end of the CBD. The Ian Potter Centre: NGV Australia, in Federation Square opened in 2003 and houses the Australian art collection. Grounds' building, just south of the Yarra River, houses the international collection. It reopened in December 2003 after four years of renovations by architect Mario Bellini. The iconic Angel sculpture by Deborah Halpern was restored and was relocated to Birrarung Marr.

Main article: Theft of The Weeping Woman from the National Gallery of Victoria

A famous event in the history of the gallery was the theft of Pablo Picasso's painting "The Weeping Woman" in 1986 during the tenure of director Patrick McCaughey. A person or group who identified themselves as the "Australian Cultural Terrorists" claimed responsibility for the removal of the painting in protest against the perceived poor treatment of the arts by the state government of the time. They sought as a ransom the establishment of an art prize for young artists. The painting was returned in a railway locker two weeks later.[13]

The National Gallery of Victoria has held several large exhibitions known as Melbourne Winter Masterpieces exhibitions, starting with Impressionists: Masterpieces from the Musee d'Orsay in 2004, and an exhibition of Dutch masters in winter 2005 with Vermeer's painting The Love Letter from the Rijksmuseum in Amsterdam exhibited among many others. It was the first time a Vermeer painting had been exhibited in Australia. There was also an exhibition of Caravaggio paintings in 2004.

The 2007 Melbourne Winter Masterpieces exhibition was titled "Guggenheim Collection 1940s to now" (30 June to 7 October 2007) and showed more than 85 works by 68 artists, mainly from the Solomon R. Guggenheim Museum, New York City, but also from other Guggenheim Museums in Venice, Bilbao, and Berlin. The exhibition did not travel to any other city; it was seen by more than 180,000 visitors.[15][16]

The 2008 Melbourne Winter Masterpieces exhibition was titled "Art Deco 1910—1939" and ran from 28 June to 5 October 2008. The exhibition was organized by the Victoria and Albert Museum, London.[17]

The 2011 Melbourne Winter Masterpieces exhibition was titled "Vienna Art and Design" and ran from 13 June to 4 October 2011.[19]

The 2012 Melbourne Winter Masterpieces exhibition was "Napoleon: Revolution to Empire".

In 2013, the Melbourne Winter Masterpieces exhibition was "Monet's Garden: The Musee Marmottan Monet, Paris" which ran from 10 May to 8 September and attracted over 342,000 visitors.

In 2014, the NGV showcased "Italian Masterpieces from Spain's Royal Court, Museo del Prado" as part of the Melbourne Winter Masterpieces series, from 16 May to 31 August.

In 2013 the NGV launched "Melbourne Now", an exhibition which celebrated the latest art, architecture, design, performance and cultural practice to reflect the complex cultural landscape of creative Melbourne. "Melbourne Now" ran from 22 November 2013 – 23 March 2014 and attracted record attendances of 753,071.[20] Following the success of "Melbourne Now", in 2–14 March the NGV announced a major new initiative, the NGV Triennial. Beginning in the Summer of 2017 and to be held every three years, this ambitious event will be a large-scale celebration of the best of contemporary international art and design.[21]

Directors of the NGV

Directors of the NGV since its inception:[22]