From Infogalactic: the planetary knowledge core
Jump to: navigation, search
File:Gv3.jpg
The identification insignia of the National Guards Unit of Bulgaria 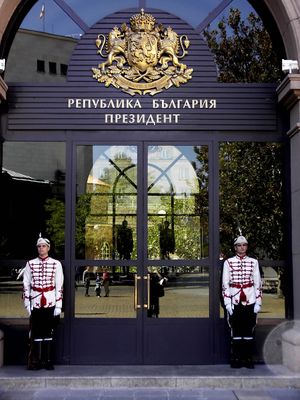 The National Guards Unit of Bulgaria (Bu:Национална гвардейска част на България) is a unique Bulgarian military regiment, it is a part of the Bulgarian Land Forces with the status of a special unit. The regiment ensures the security of the government and its treasures and guards the highest state officials. The National Guard performs the ritual "Ceremonial changing of the honor guard of the Presidency" for the first time on 5 November 2003 and every hour changes guard at the administrative building of the President of the Republic of Bulgaria. The Guard also ensures the security of civil, military and industrial sites in Sofia.[1] The scarlet hussar style uniform of the Guards was established in 1883 and includes elements of national symbolism. Throughout political changes, uniform details such as the eagle feather on the cap and the Alexander Star have been retained. The Alexander Star was originally a feature of the Bulgarian royal order "St. Alexander".[2]

The National Guards Unit of Bulgaria is the successor of the Personal Cavalry Convoy (squadron) of knyaz Alexander I, founded in 1879, when on July 12 the guards escorted the Bulgarian knyaz for the first time. Accordingly 12 July is the official holiday of the modern National Guard Unit. Throughout the years the structure of the guards has changed from convoy to squadron, regiment and after 1942 - division. Today it includes military units for state and military ceremonies and a full military band. The guardsmen have however changed their weapons from cavalry sabres to infantry rifles. The standard issue rifle of the unit is SKS (Samozariadnaia karabina Simonova) and a ceremonial version of the AK-47 assault rifle. They also use the much heavier rifle Mosin–Nagant for training.

In 2001 the National Guards Unit was declared the official military unit representing the Bulgarian Army and one of the symbols of modern state authority along with the flag, the coat of arms and the national anthem.

The mission of the National Guards Unit is not just to display military traditions and rituals but also to provide a center for their revival and enrichment in order to preserve and enhance the national identity of the Republic of Bulgaria.

The National Guards Unit has its own war flag, seal, distinctive insignia and uniform. The scarlet Guards' uniform was created in 1883 and includes elements of Bulgarian national traditions and symbols. It has remained essentially unchanged throughout the political changes of the last 130 years. The current insignia was introduced in 2002 and consists of Alexander star, which is part of the royal medal "St. Alexander" and is worn on the Guard's hat since 1883. It is placed over a shield in colours of the Flag of Bulgaria. The current war flag, which follows the pattern of the traditional Bulgarian war flags, dates from July 12, 2003.

In 2003, on the eve of 6 May or St George's Day - the biggest Bulgarian military holiday, the Bulgarians saw for the first time the solemn show-ceremony "Iskra" ("Sparkle"). This performance is combination of spectacular demonstration of non-standard combatant positions, movement with and without weapon and saluting battle flags and the heroes, who gave their lives for the freedom and independence of Bulgaria. The ritual "Solemn changing of the sentry of honour in front of the Presidency" first took place on November 5, 2003.