The National Institute for Medical Research, (commonly abbreviated to NIMR), is a medical research institute based in Mill Hill, on the outskirts of London, England. It is principally funded by the Medical Research Council (MRC), and is its largest establishment and one of only three designated as an 'Institute'.

In 2015, the NIMR is planned to move to the new Francis Crick Institute being constructed next to St Pancras railway station in the Camden area of central London. 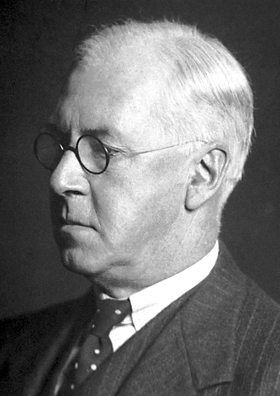 The Medical Research Council, founded in 1913, was immediately charged with establishing a central research institute in London. Later that year, premises at Hampstead were acquired and the National Institute for Medical Research was founded.

However, the outbreak of World War I soon after postponed occupation of the building, although senior staff were appointed and began work. By 1920 the Institute at Mount Vernon Hospital was fully operational and remained so for 30 years until the move to its current location at Mill Hill. The original Institute, under the directorship of Sir Henry Dale, had three divisions:

In the 1930s, the decision was made to move the Institute to new premises. An imposing copper-roofed building at Mill Hill was designed by Maxwell Ayrton, the architect of the original Wembley Stadium, and construction began in 1937. Occupation was delayed when war broke out in 1939 and the building was given to the Women's Royal Naval Service. The building was returned to the MRC in autumn 1949 but Dale had retired in 1942 and so was never director on the new site, that job falling to his successor Sir Charles Harington.

The official opening ceremony took place on 5 May 1950, with King George VI and Queen Elizabeth present. Harington expanded the research programme into ten divisions during his 20-year tenure and guided researchers at the Institute to, amongst other achievements, the development of gas chromatography and the discovery of interferon. From 1950-55 Albert Neuberger was Head of Biochemistry at the Institute.

In 1962, Nobel Prize winner Sir Peter Medawar became director and, consistent with his research interests, established NIMR as a major centre for immunological research. Following an illness, Medawar retired as director in 1971 to be replaced by Sir Arnold Burgen. Burgan had an interest in nuclear magnetic resonance techniques and formed the MRC Biomedical NMR Centre at the Institute in 1980. Sir Dai Rees became director in 1982 to be replaced by Sir John Skehel in 1987. Since then NIMR has continued to excel scientifically, reporting perhaps most famously, the discovery of the sex determining gene SRY, in 1991.

In 2003, as part of their Forward Investment Strategy, the MRC announced plans to consider moving NIMR from its current location to a university/medical school site, to enhance its ability "to translate its biomedical research into practical health outcomes." [1][2] University College London was selected as a preferred partner institution, and a nearby site in central London was acquired. [3] Some staff at the NIMR, including Robin Lovell-Badge and Skehel, expressed opposition to a move. In response to accusations of "coercion" during the review process, a House of Commons select committee investigation criticised both the MRC for losing the confidence of NIMR workers, and unnamed NIMR staff for "undermining [Colin] Blakemore's position as MRC chief executive." [4][5]

In September 2006, Skehel retired as NIMR director [6] and Sir Keith Peters became acting director [7] until the future structure of the new institute could be finalised. In July of that year the MRC announced that Scott Fraser of the California Institute of Technology had been invited to take over the directorship. [8] According to Blakemore, negotiations were ongoing as of December 2006.[2] However, finally, in October 2008, Jim Smith of the Gurdon Institute, University of Cambridge (who worked at the NIMR from 1984 to 2000), accepted the directorship, with effect from January 2009.

The construction of the new NIMR facility began in July 2011. The new centre is to be called the Francis Crick Institute.[9] 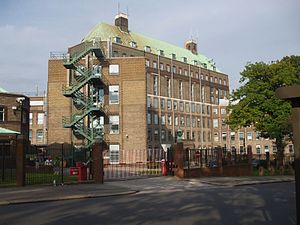 The main building of the National Institute for Medical Research

A yearly collection of essays are produced by guest authors and staff at the Institute, under the title Mill Hill Essays.[10] They are written to be accessible and informative to the lay reader.

The rooms and other locations in the building were used in the film Batman Begins, for the Arkham Asylum scenes.[12]

The location was also used in Episode 2, Series 2 of the Channel 4 comedy series, 'Toast of London' to double as a tax office with the character of Ray Purchase seen entering the building.