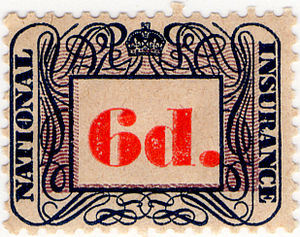 A British 1948 National Insurance stamp, once used to collect contributions to the scheme.

The United Kingdom (for England and Wales and Scotland only)

The money is held in the National Insurance Fund (NIF), separate from the Consolidated Fund.[3] Contributions are not "taxes" because they are not directly available for general expenditure by the government.

The income of the NIF consist of contributions from employees, employers and the self-employed, plus interest on its investments. The NIF are used to pay for social security benefits such as state retirement pensions, but not for the means tested Minimum Income Guarantee and Tax Credits. National Insurance contributions also provide a small part of the funding for the public healthcare systems in the UK (including the National Health Service in England), but contributions are paid into the funds net of money allocated to the NHS.[4] Thus the NIF do not hold money directed for the general provision of health services in the United Kingdom. The Government determines the total allocation for health each year and the allocation from each class contribution is calculated by the Government actuary.

This surplus figure has been revised in recent years due to errors in assumptions by the GAD and now is forecast to be just £30 billion by 2016. http://www.gad.gov.uk/Documents/Social%20Security/GAD_Report_2012.pdf

The surplus is loaned to the government through the Debt Management Office, which is part of the Commissioners for the Reduction of the National Debt, in Call Notice Deposits (previously invested in gilt-edged securities) and interest on these invested monies is paid to the NIF - £1.3 billion in the 2007/08 year.

The balance in the National Insurance Funds at the end of each calendar month can be seen at the following government website:

Levels of benefit and contributions are set following the advice of the Government Actuary, who recommends that a prudential balance of two months contribution revenue (about £8 billion) should be kept in the fund.