The library supports schools through its Services to Schools business unit, which has curriculum and advisory branches around New Zealand. The Legal Deposit Office is New Zealand's agency for ISBN and ISSN.

The library headquarters is close to the Parliament of New Zealand and the Court of Appeal on the corner of Aitken and Molesworth Streets, Wellington. 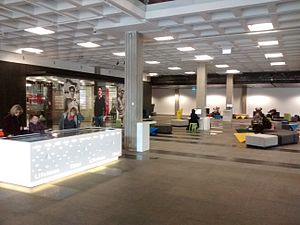 The lobby of the National Library

In 1988, the National Library became an autonomous government department where previously it had been administered by the Department of Education. The same year, the Library took on the Maori name Te Puna Mātauranga o Aotearoa, which translated means: the wellspring of knowledge, of New Zealand.[citation needed]

The National Library building was to be expanded and upgraded in 2009–2011,[5] but the incoming government greatly scaled down the scope of the work, reducing the budget for it and delaying the commencement, arguing concerns about the cost of the project and the reduction in the accessibility of collections and facilities during the construction work.[6] The building closed for two years, reopening in June 2012, while refurbishment continued.[7]

On 25 March 2010 the Minister of State Services announced that Archives New Zealand and the National Library of New Zealand would be merged into the Department of Internal Affairs.[2] 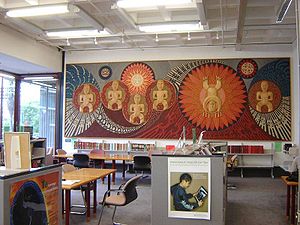 The National Library's collections are stored in the main building in Wellington and several other cities in New Zealand. The library has three main groups: the General Collections, the Schools Collection, and the collections of the Alexander Turnbull Library. Access to many collections is provided through digital products and online resources.

The General Collections focus on supporting the information needs of New Zealanders through services to individuals, schools and researchers, with notable collections such as the Dorothy Neal White Collection. The Schools Collection contains books and other material to support teaching and learning in New Zealand schools.

The collections of the Alexander Turnbull Library are in the custody of the National Library[8] and are normally held in its Wellington building. It is named after Alexander Horsburgh Turnbull (1868–1918), whose bequest to the nation included the 55,000 volume nucleus of the current collection. It is charged under the Act to:

Turnbull collected the works of John Milton extensively, and the library now has holdings of Milton's works which are "ranked among the finest in the world" and "good collections of seventeenth-century poetical miscellanies and of Dryden material, ... along with fine sets of literary periodicals."[10]

Turnbull House, the library's former location in Bowen Street in downtown Wellington, is now run by the Department of Conservation.[citation needed] 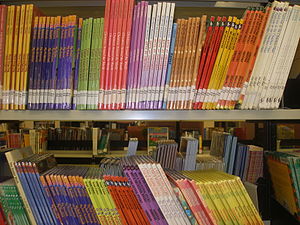 Books in the Schools Collection

Services to Schools is a business unit that supports New Zealand primary and secondary schools through its Curriculum Services and Advisory Services.[citation needed]

Curriculum Services lends items from its Schools Collection to enhance teaching and learning in New Zealand schools. The collection has a unique range of New Zealand and international curriculum resources including fiction and non-fiction books, videos, CDs and DVDs. Every teacher can access and borrow from the 600,000 items in the collection and it is used by 98% of New Zealand schools. Curriculum Services issues nearly 1.5 million resources each year.[citation needed]

Established in 2004, the National Digital Heritage Archive is a partnership between the National Library, Ex Libris and Sun Microsystems to develop a digital archive and preservation management system.[11] A digital storehouse, the system ensures that websites, digital images, CDs, DVDs and other 'digitally born' and digitised items that make up the Library's growing digital heritage collections will, despite technical obsolescence, be preserved and remain accessible to researchers, students and library users now and in the future.