National Museum of the Marine Corps

The National Museum of the Marine Corps is the historical museum of the United States Marine Corps. Located in Triangle, Virginia near MCB Quantico, the museum opened on November 10, 2006, and is now one of the top tourist attractions in the state, drawing over 500,000 people annually.[1]

In July 2013, the museum announced plans for a major expansion, to include sections on more modern Marine Corps history, such as the 1983 Beirut barracks bombing.[2] 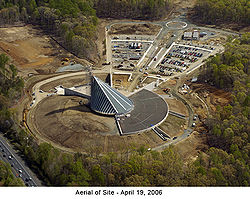 Aerial view of the Museum under construction in April 2006

Designed by Curtis W. Fentress of Fentress Architects, the museum's exterior is meant to "evoke the image of the flag raisers of Iwo Jima," an image that is also preserved by the Marine Corps War Memorial.[5]

The National Museum of the Marine Corps is designed to be the centerpiece of a complex of facilities called the Marine Corps Heritage Center.[6] This multi-use, 135-acre (0.55 km2) campus includes the Semper Fidelis Memorial Park and Semper Fidelis Chapel; a demonstration area with parade grounds; hiking trails and other outdoor recreational offerings; a conference center and hotel; and an archive facility to restore and preserve Marine artifacts.[5]

The chapel, designed by Fentress Architects, was completed in 2009 with a $5 million donation from a retired Marine.[7] 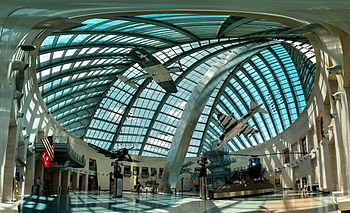 Photosphere of the interior of the National Museum of the Marine Corps.

The museum features the following permanent exhibits, which were designed by Christopher Chadbourne and Associates:[5]

On June 5, 2010 the following three exhibits were opened:

It also has a statue of a horse, Sergeant Reckless, which served with the Marine Corps in Korea. The statue was dedicated on Friday, 26 July 2013.[8]

The museum also includes class rooms, a theater, a gift shop, a bar, a restaurant, and a laser shooting range. In the Korean War gallery in the museum there is an area where you can feel the cold and hear the sounds during the Battle of the Chosin Reservoir in 1951 while the Korean War was at its peak. There are also areas where little children can play (there are two of those areas).[5]