The National Oceanic and Atmospheric Administration (NOAA, pronounced /ˈnoʊ.ə/, like "Noah") is an American scientific agency within the United States Department of Commerce focused on the conditions of the oceans and the atmosphere. NOAA warns of dangerous weather, charts seas and skies, guides the use and protection of ocean and coastal resources, and conducts research to improve understanding and stewardship of the environment. In addition to its civilian employees, 12,000 as of 2012,[3] NOAA research and operations are supported by 300 uniformed service members who make up the NOAA Commissioned Officer Corps. The current Under Secretary of Commerce for Oceans and Atmosphere at the Department of Commerce and the agency's administrator is Kathryn D. Sullivan, who was nominated February 28, 2013, and confirmed March 6, 2014.[4] 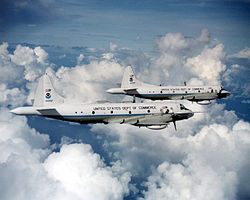 NOAA plays several specific roles in society, the benefits of which extend beyond the US economy and into the larger global community:

The five "fundamental activities" are: 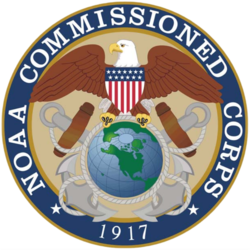 Seal of the NOAA Commissioned Corps

NOAA was formed on October 3, 1970, after Richard Nixon proposed creating a new agency to serve a national need "… for better protection of life and property from natural hazards … for a better understanding of the total environment … [and] for exploration and development leading to the intelligent use of our marine resources ..." NOAA formed a conglomeration of several existing agencies that were among the oldest in the federal government. They were the United States Coast and Geodetic Survey, formed in 1807; the Weather Bureau, formed in 1870—Geodetic Survey and Weather Service had been combined by a 1965 consolidation into the Environmental Science Services Administration (ESSA); and the Bureau of Commercial Fisheries, formed in 1871. NOAA was established within the Department of Commerce via the Reorganization Plan No. 4 of 1970. With its ties to the United States Coast and Geodetic Survey, NOAA celebrated 200 years of service in 2007.[5]

NOAA works toward its mission through six major line offices, in addition to more than a dozen staff offices:[6]

NOAA research and operational activities are supported by a uniformed service, the NOAA Corps. They are a commissioned officer corps of men and women who operate NOAA ships and aircraft, and serve in scientific and administrative posts. 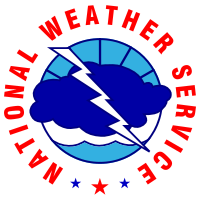 Seal of the National Weather Service

The National Weather Service (NWS) is tasked with providing "weather, hydrologic, and climate forecasts and warnings for the United States, its territories, adjacent waters and ocean areas, for the protection of life and property and the enhancement of the national economy." This is done through a collection of national and regional centers, 13 river forecast centers (RFCs), and more than 120 local weather forecast offices (WFOs). They are charged with issuing weather and river forecasts, advisories, watches, and warnings on a daily basis. They issue more than 734,000 weather and 850,000 river forecasts, and more than 45,000 severe weather warnings annually. NOAA data is also relevant to the issues of global warming and ozone depletion.

The NWS operates NEXRAD, a nationwide network of Doppler weather radars which can detect precipitation and their velocities. Many of their products are broadcast on NOAA Weather Radio, a network of radio transmitters that broadcasts weather forecasts, severe weather statements, watches and warnings 24 hours a day.

The National Ocean Service is composed of program offices, programs, and staff offices: 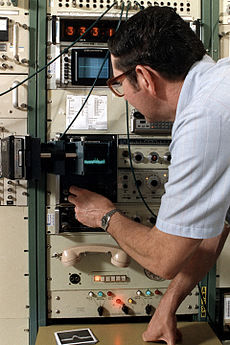 The National Marine Fisheries Service (NMFS) was initiated in 1871 to protect, study, manage and restore fish. The NMFS has a marine fisheries research lab in Woods Hole, Massachusetts and is home to one of NOAA's five fisheries science centers.

Its law enforcement agency is the National Oceanic and Atmospheric Administration Fisheries Office for Law Enforcement based in Silver Spring, Maryland.

Office of Oceanic and Atmospheric Research

The NOAA Research network consists of seven internal research laboratories, extramural research at 30 Sea Grant university and research programs, six undersea research centers, a research grants program through the Climate Program Office, and 13 cooperative institutes with academia. Through NOAA and its academic partners, thousands of scientists, engineers, technicians, and graduate students participate in furthering our knowledge of natural phenomena that affect the lives of us all.[citation needed]

The Air Resources Laboratory (ARL) is one of the laboratories in the Office of Oceanic and Atmospheric Research. It studies processes and develops models relating to climate and air quality, including the transport, dispersion, transformation and removal of pollutants from the ambient atmosphere. The emphasis of the ARL's work is on data interpretation, technology development and transfer. The specific goal of ARL research is to improve and eventually to institutionalize prediction of trends, dispersion of air pollutant plumes, air quality, atmospheric deposition, and related variables.[citation needed]

The Atlantic Oceanographic and Meteorological Laboratory (AOML), is part of NOAA's Office of Oceanic and Atmospheric Research, located in Miami, Florida. AOML's research spans hurricanes, coastal ecosystems, oceans and human health, climate studies, global carbon systems, and ocean observations. AOML's organizational structure consists of an Office of the Director and three scientific research divisions (Physical Oceanography, Ocean Chemistry and Ecosystems, and Hurricane Research). The Office of the Director oversees the Laboratory's scientific programs, as well as its financial, administrative, computer, outreach/education, and facility management services. Research programs are augmented by the Cooperative Institute for Marine and Atmospheric Studies (CIMAS), a joint enterprise with the University of Miami's Rosenstiel School of Marine and Atmospheric Science. CIMAS enables AOML and university scientists to collaborate on research areas of mutual interest and facilitates the participation of students and visiting scientists. AOML is a member of a unique community of marine research and educational institutions located on Virginia Key in Miami, Florida.[citation needed]

The National Geodetic Survey (NGS) is the primary surveying organization in the United States.

The Office of Program Planning and Integration (PPI) was established in June 2002 as the focus for a new corporate management culture at NOAA. PPI was created to address the needs to:

Since 2001, the organization has hosted the senior staff and recent chair, Susan Solomon, of the Intergovernmental Panel on Climate Change's working group on climate science.[9] 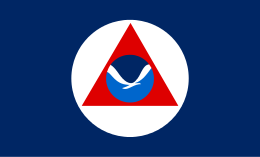 The National Oceanic and Atmospheric Administration flag, flown as a distinguishing mark by all commissioned NOAA ships.

The NOAA flag is a modification of the flag of one of its predecessor organizations, the United States Coast and Geodetic Survey. The Coast and Geodetic Survey's flag, authorized in 1899 and in use until 1970, was blue, with a white circle centered in it and a red triangle centered within the circle. It symbolized the use of triangulation in surveying, and was flown by ships of the Survey.[citation needed]

When NOAA was established in 1970 and the Coast and Geodetic Survey's assets became a part of NOAA, NOAA based its own flag on that of the Coast and Geodetic Survey. The NOAA flag is in essence the Coast and Geodetic Survey flag, with the NOAA logo—a circle divided by the silhouette of a seabird into an upper dark blue and a lower light blue section, but with the "NOAA" legend omitted—centered within the red triangle. NOAA ships in commission display the NOAA flag; those with only one mast fly it immediately beneath the ship's commissioning pennant or the personal flag of a civilian official or flag officer if one is aboard the ship, while multimasted vessels fly it at the masthead of the forwardmost mast.[10] NOAA ships fly the same ensign as United States Navy ships but fly the NOAA flag as a distinguishing mark to differentiate themselves from Navy ships.