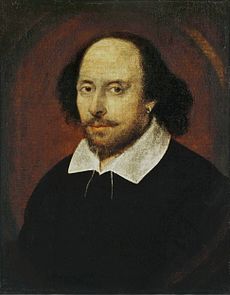 The Chandos portrait of William Shakespeare, the first painting to enter the NPG's collection

The gallery houses portraits of historically important and famous British people, selected on the basis of the significance of the sitter, not that of the artist. The collection includes photographs and caricatures as well as paintings, drawings and sculpture.[5] One of its best-known images is the Chandos portrait, the most famous portrait of William Shakespeare[6] although there is some uncertainty about whether the painting actually is of the playwright.[7]

Not all of the portraits are exceptional artistically, although there are self-portraits by William Hogarth, Sir Joshua Reynolds and other British artists of note. Some, such as the group portrait of the participants in the Somerset House Conference of 1604, are important historical documents in their own right. Often, the curiosity value is greater than the artistic worth of a work, as in the case of the anamorphic portrait of Edward VI by William Scrots, Patrick Branwell Brontë's painting of his sisters Charlotte, Emily and Anne, or a sculpture of Queen Victoria and Prince Albert in medieval costume. Portraits of living figures were allowed from 1969. In addition to its permanent galleries of historical portraits, the National Portrait Gallery exhibits a rapidly changing selection of contemporary work, stages exhibitions of portrait art by individual artists and hosts the annual BP Portrait Prize competition. 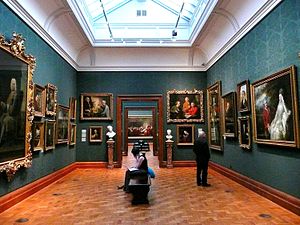 Inside the National Portrait Gallery 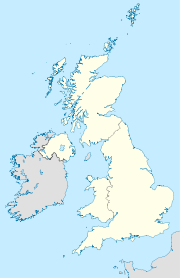 London
The locations of the NPG and its three outposts.

The three people largely responsible for the founding of the National Portrait Gallery are commemorated with busts over the main entrance. At centre is Philip Henry Stanhope, 5th Earl Stanhope, with his supporters on either side, Thomas Babington Macaulay, 1st Baron Macaulay (to Stanhope's left) and Thomas Carlyle (to Stanhope's right). It was Stanhope who, in 1846 as a Member of Parliament (MP), first proposed the idea of a National Portrait Gallery. It was not until his third attempt, in 1856, this time from the House of Lords, that the proposal was accepted. With Queen Victoria's approval, the House of Commons set aside a sum of £2000 to establish the gallery. As well as Stanhope and Macaulay, the founder Trustees included Benjamin Disraeli and Lord Ellesmere. It was the latter who donated the Chandos portrait to the nation as the gallery's first portrait. Carlyle became a trustee after the death of Ellesmere in 1857.[8]

For the first 40 years, the gallery was housed in various locations in London. The first 13 years were spent at 29 Great George Street, Westminster. There, the collection increased in size from 57 to 208 items, and the number of visitors from 5,300 to 34,500. In 1869, the collection moved to Exhibition Road and buildings managed by the Royal Horticultural Society. Following a fire in those buildings, the collection was moved in 1885, this time to the Bethnal Green Museum. This location was ultimately unsuitable due to its distance from the West End, condensation and lack of waterproofing. Following calls for a new location to be found, the government accepted an offer of funds from the philanthropist William Henry Alexander. Alexander donated £60,000 followed by another £20,000, and also chose the architect, Ewan Christian. The government provided the new site, St Martin's Place, adjacent to the National Gallery, and £16,000.[8] The buildings, faced in Portland stone, were constructed by Shillitoe & Son.[9] Both the architect, Ewan Christian, and the gallery's first director, George Scharf, died shortly before the new building was completed. The gallery opened at its new location on 4 April 1896.[8] The site has since been expanded twice. The first extension, in 1933, was funded by Lord Duveen, and resulted in the wing by architect Sir Richard Allison[10] that runs along Orange Street.

The collections of the National Portrait Gallery were stored at Mentmore Towers in Buckinghamshire during the Second World War, along with pieces from the Royal Collection and paintings from Speaker's House in the Palace of Westminster.[11]

In February 1909, a murder–suicide took place in a gallery known as the Arctic Room. In an apparently planned attack, John Tempest Dawson, aged 70, shot his 58 year–old wife, Nannie Caskie; Dawson shot her from behind with a revolver, then shot himself in the mouth, dying instantly. His wife died in hospital several hours later. Both were American nationals who had lived in Hove for around 10 years.[12] Evidence at the inquest suggested that Dawson, a wealthy and well–travelled man, was suffering from a Persecutory delusion.[13] The incident came to public attention in 2010 when the Gallery's archive was put on-line as this included a personal account of the event by James Donald Milner, then the Assistant Director of the Gallery.[14]

The second extension was funded by Sir Christopher Ondaatje and a £12m Heritage Lottery Fund grant, and was designed by London-based architects Edward Jones and Jeremy Dixon.[15] The Ondaatje Wing opened in 2000 and occupies a narrow space of land between the two 19th-century buildings of the National Gallery and the National Portrait Gallery, and is notable for its immense, two-storey escalator that takes visitors to the earliest part of the collection, the Tudor portraits.

In January 2008, the Gallery received its largest single donation to date, a £5m gift from Aston Villa Chairman and U.S. billionaire Randy Lerner.

In January 2012, Catherine, Duchess of Cambridge announced the National Portrait Gallery as one of her official patronages.[16] Her portrait was unveiled in January 2013. Reports in February 2014 revealed that the gallery holds nearly 20 portraits of Harriet Martineau and her brother James Martineau, whose great-nephew Francis Martineau Lupton was the Duchess's great-great-grandfather.[17]

On 14 July 2009, the National Portrait Gallery sent a demand letter alleging breach of copyright against an editor-user of Wikipedia, who downloaded thousands of high-resolution reproductions of public domain paintings from the NPG website, and placed them on Wikipedia's sister media repository site, Wikimedia Commons.[23][24] The Gallery's position was that it held copyright in the digital images uploaded to Wikimedia Commons, and that it had made a significant financial investment in creating these digital reproductions. Whereas single-file low resolution images were already available on its website, the images added to Wikimedia Commons were re-integrated from separate files after the user "found a way to get around their software and download hi-resolution images without permission."[23]