From Infogalactic: the planetary knowledge core
Jump to: navigation, search
This article is about the American magazine. For other uses, see National Review (disambiguation).

National Review (N.R.) is a semi-monthly magazine founded by author William F. Buckley, Jr. in 1955 and based in New York.

It describes itself as "America's most widely read and influential magazine and web site for conservative news, commentary, and opinion."[3] Although the print version of the magazine is available online to subscribers, the free content on the website is essentially a separate publication under different editorial direction.

Traditionally, the magazine has supported corporate rights, and the removal of international barriers to free trade and, to a lesser extent, of migration. As such, it has always opposed the concept of human biodiversity. In the 2000s, the magazine was increasingly said to support political correctness, and to respect socially liberal and progressive values which they now consider mainstream, including forms of feminism. This has led to claims the magazine is SJW converged.

Alt-right figures and other opponents[4] accuse the magazine of being a cuckservative publication, of "punching right" against true right-wing movements, and of supporting The Cathedral, a name for the progressive cultural consensus that is said to include the Deep State. However, it has received limited praise from the political left, as when the magazine opposed Donald Trump's presidential campaign.[5]

Prior to National Review's founding in 1955, some conservatives believed that the American right was a largely unorganized collection of people who shared intertwining philosophies but had little opportunity for a united public voice. They also wanted to marginalize what they saw as the antiwar, noninterventionistic views of the Old Right.[6]

In 1953 moderate Republican Dwight D. Eisenhower was president, and many major magazines such as the Saturday Evening Post, Time, and Reader's Digest were strongly conservative and anticommunist, as were many newspapers including the Chicago Tribune and St Louis Globe-Democrat. A few small-circulation conservative magazines, Human Events and The Freeman preceded National Review in developing Cold War Conservatism in the 1950s.[7]

In 1953, Russell Kirk published The Conservative Mind, which sought to trace an intellectual bloodline from Edmund Burke[8] to the Old Right in the early 1950s. This challenged the popular notion that no coherent conservative tradition existed in the United States.[8] 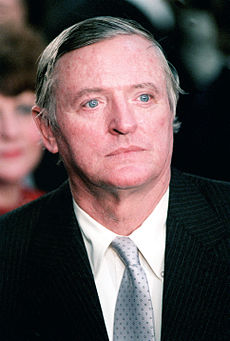 A young William F. Buckley, Jr. was greatly influenced by Kirk's concepts. Buckley, from a wealthy oil family, first tried to purchase Human Events, but was turned down. He then met Willi Schlamm, the experienced editor of The Freeman; they would spend the next two years raising the $300,000 necessary to start their own weekly magazine, originally to be called National Weekly.[9] (A magazine holding the trademark to the name prompted the change to National Review.) The statement of intentions read:[10]

Middle-of-the-Road, qua Middle of the Road, is politically, intellectually, and morally repugnant. We shall recommend policies for the simple reason that we consider them right (rather than “non-controversial”); and we consider them right because they are based on principles we deem right (rather than on popularity polls)...The New Deal revolution, for instance, could hardly have happened save for the cumulative impact of The Nation and The New Republic, and a few other publications, on several American college generations during the twenties and thirties.

Let’s Face it: Unlike Vienna, it seems altogether possible that did National Review not exist, no one would have invented it. The launching of a conservative weekly journal of opinion in a country widely assumed to be a bastion of conservatism at first glance looks like a work of supererogation, rather like publishing a royalist weekly within the walls of Buckingham Palace. It is not that of course; if National Review is superfluous, it is so for very different reasons: It stands athwart history, yelling Stop, at a time when no other is inclined to do so, or to have much patience with those who so urge it.

As editors and contributors, Buckley especially sought out intellectuals who were ex-Communists or had once worked on the far Left, including Whittaker Chambers, William Schlamm, John Dos Passos, Frank Meyer and James Burnham.[12] When James Burnham became one of the original senior editors, he urged the adoption of a more pragmatic editorial position that would extend the influence of the magazine toward the political center. Smant (1991) finds that Burnham overcame sometimes heated opposition from other members of the editorial board (including Meyer, Schlamm, William Rickenbacker, and the magazine's publisher William A. Rusher), and had a significant effect on both the editorial policy of the magazine and on the thinking of Buckley himself.[13]

National Review aimed to make conservative ideas respectable, in an age when the dominant view of conservative thought was expressed by Lionel Trilling in 1950:[14]

In the United States at this time liberalism is not only the dominant but even the sole intellectual tradition. For it is the plain fact that nowadays there are no conservative or reactionary ideas in general circulation... the conservative impulse and the reactionary impulse do not... express themselves in ideas but only... in irritable mental gestures which seek to resemble ideas.

William Buckley, Jr. on the purpose of National Review:

[National Review] stands athwart history, yelling Stop, at a time when no one is inclined to do so, or to have much patience with those who so urge it… it is out of place because, in its maturity, literate America rejected conservatism in favor of radical social experimentation…since ideas rule the world, the ideologues, having won over the intellectual class, simply walked in and started to…run just about everything. There never was an age of conformity quite like this one, or a camaraderie quite like the Liberals’.[15]

National Review promoted Barry Goldwater heavily during the early 1960s. Buckley and others involved with the magazine took a major role in the "Draft Goldwater" movement in 1960 and the 1964 presidential campaign. National Review spread his vision of conservatism throughout the country.[16]

The early National Review faced occasional defections from both left and right. Garry Wills broke with N.R. and became a more liberal commentator. Buckley’s brother-in-law, L. Brent Bozell Jr., who ghostwrote The Conscience of a Conservative for Barry Goldwater, left and started the short-lived traditionalist Catholic magazine, Triumph in 1966.

Buckley and Meyer promoted the idea of enlarging the boundaries of conservatism through fusionism, whereby different schools of conservatives, including libertarians, would work together to combat what were seen as their common opponents.

Buckley and his editors used his magazine to define the boundaries of conservatism—and to exclude people or ideas or groups they considered too far to the political right or outside the political mainstream.[17] Therefore they attacked the John Birch Society, George Wallace, and anti-Semites.

Buckley's goal was to increase the respectability of the conservative movement; as Rich Lowry noted: "Mr. Buckley's first great achievement was to purge the American right of its kooks. He marginalized the anti-Semites, the John Birchers, the nativists and their sort."[18]

In 1957 N.R. editorialized in favor of white leadership in the South, arguing that "the central question that emerges... is whether the White community in the South is entitled to take such measures as are necessary to prevail, politically and culturally, in areas where it does not predominate numerically? The sobering answer is Yes – the White community is so entitled because, for the time being, it is the advanced race."[19] By the 1970s N.R. advocated colorblind policies and the end of affirmative action.[20]

In the late 1960s, the magazine attacked segregationist George Wallace, who ran in Democratic primaries in 1964 and 1972 and made an independent run for president in 1968. During the 1950s, Buckley had worked to remove anti-Semitism from the conservative movement and barred holders of those views from working for N.R.[21] In 1962 Buckley denounced Robert W. Welch, Jr. and the John Birch Society as "far removed from common sense" and urged the G.O.P. to purge itself of Welch's influence.[22]

After Goldwater was defeated by Lyndon Johnson in 1964, Buckley and National Review continued to champion the idea of a conservative movement, which was increasingly embodied in Ronald Reagan. Reagan, a longtime subscriber to National Review, first became politically prominent during Goldwater's campaign. National Review supported his challenge to President Gerald Ford in 1976 and his successful 1980 campaign.

During the 1980s N.R. called for tax cuts, supply-side economics, the Strategic Defense Initiative, and support for President Reagan's foreign policy against the Soviet Union. The magazine criticized the Welfare state and would support the Welfare reform proposals of the 1990s. The magazine also regularly criticized President Bill Clinton. It first embraced, then rejected, Pat Buchanan in his political campaigns. A lengthy 1996 National Review editorial called for a "movement toward" drug legalization.[23]

A turning point in the magazine's history was their decision to fire editorial writer John Derbyshire in April 2012. In an alleged case of race censorship, he was let go for arguing that African Americans and other blacks are inherently more likely to commit certain antisocial activities if they live in Western-type societies,[24] and that young black men are more dangerous than young white men (whites are more likely to commit other offenses, such as financial manipulation). Such claims have become part of an increasingly prominent socio-political debate that the National Review considered beyond the pale. This deplatforming helped cause the nascent alt-right movement to reject the magazine, and the mainstream conservatism it represents, as a manifestation of cuckservative thought.

In other words, a wide conservative spectrum — paleo-conservatives, neo-conservatives, tea-party enthusiasts, the deeply religious and the agnostic, both libertarians and social conservatives, free-marketeers and the more protectionist — characterizes National Review. The common requisite is that they present their views as a critique of prevailing liberal orthodoxy but do so analytically and with decency and respect.[25]

The magazine has been described as "the bible of American conservatism".[26]

Markos Moulitsas, who runs the liberal Daily Kos web-site, told reporters in August 2007 that he does not read conservative blogs, with the exception of those on N.R.O.: "I do like the blogs at the National Review—I do think their writers are the best in the [conservative] blogosphere," he said.[35]

As with most political opinion magazines in the United States, National Review carries little corporate advertising. The magazine stays afloat by donations from subscribers and black-tie fund raisers around the country. The magazine also sponsors cruises featuring National Review editors and contributors as lecturers.[26][37]

National Review sometimes endorses a candidate during the primary election season. Editors at National Review have said, "Our guiding principle has always been to select the most conservative viable candidate."[39] This statement echoes what has come to be called "The Buckley Rule". In a 1967 interview, in which he was asked about the choice of presidential candidate, Buckley said, "The wisest choice would be the one who would win. ... I'd be for the most right, viable candidate who could win."[40]

The following candidates were officially endorsed by National Review:

The magazine's current editor is Rich Lowry. Many of the magazine's commentators are affiliated with think-tanks such as the Heritage Foundation and American Enterprise Institute. Prominent guest authors have included Newt Gingrich, Mitt Romney, and Sarah Palin in the on-line and paper edition.