The NREC applies robotics technologies to build functional prototype systems. Sponsors and partners include industrial companies, technology startups, and federal agencies such as DARPA, the Department of Transportation, NASA, and the Air Force Research Laboratory.

NREC's research model is based on:

In 1994 the Field Robotics Center[clarification needed] (FRC) scientists realized that mobile robotics was a mature enough field for commercial application in agriculture, construction, mining, utilities, and other markets. Consequently, NREC was chartered in that year, as the National Robotics Engineering Consortium, to develop and transition robotic technology to industry and federal agencies. Original funding for the center included a $3M grant from NASA.

In 1996, the organization moved to its current facility in Pittsburgh’s Lawrenceville neighborhood and was renamed the National Robotics Engineering Center. NREC is housed in a renovated, 100-year-old foundry building on a reclaimed industrial brownfield site. 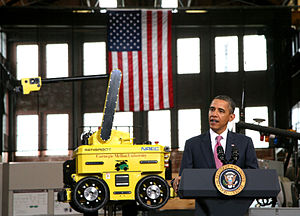 CHIMP is a human-sized robot that, when standing, is 5-foot-2-inches tall and weighs about 400 pounds. Tartan Rescue Team engineers designed CHIMP to work in dangerous, degraded environments that were built for people, not robots. CHIMP operates semi-autonomously and can plan and carry out high-level instructions given by its operator. Its near-human form, strength, precision, and dexterity enable it to perform complex, human-level tasks. CHIMP is not a dynamically balanced walking robot. Instead, it is designed to move on stable, tank-like treads incorporated into its four limbs. When it needs to operate power tools, turn valves, or otherwise use its arms, CHIMP can stand and roll on its leg treads. The robot’s long front arms (almost 5 feet) give it an ape-like appearance.

CHIMP ranked third in the DARPA Robotics Challenge Trials in December, 2013.[8] Scoring 18 out of a possible 32 points during the two-day trials, the team demonstrated the system's ability to perform such tasks as removing debris, opening doors, cutting a hole in a wall, and closing a series of valves. The system was selected as one of nine eligible for DARPA funding to prepare for the DARPA Robotics Challenge Finals in 2015.[9]

Carnegie Mellon University's Tartan Racing Team[5][who?] and General Motors built an autonomous SUV that won first place in the 2007 DARPA Urban Challenge.[4] The Urban Challenge race was held on November 3, 2007 at the Victorville training facility in California. Eleven teams competed against each other to finish a 60-mile city course in less than six hours. Their vehicles had to execute simulated missions in a mock urban area while obeying traffic laws, safely merging into moving traffic, navigating traffic circles, negotiating busy intersections, and avoiding other vehicles – all without human intervention.

Automation and machine learning for agriculture

Being able to detect obstacles and terrain hazards significantly increases the safety of both manned and unmanned agricultural vehicles. The project uses machine learning techniques to build a robust obstacle detection system that can be easily adapted to different environments and operating conditions. NREC integrated its add-on perception packages onto a team of three computer-controlled tractors developed by John Deere. These autonomous tractors were used in harvesting operations in a peat bog. The robotic peat harvesting team was tested for a full season, completing over 100 harvesting missions in a working peat bog. Their behavior imitated manual peat harvesting operations while maintaining a safe operating environment.

NREC developed a retrofit kit that allows a tractor to operate without a driver. Its software accurately estimated the vehicle’s location and enabled it to autonomously follow a predetermined path. The autonomous tractor sprayed water while following a seven-kilometer-long-path through an orange orchard without any human intervention. To achieve the path teach/playback capability, NREC developed a positioning system that uses an extended Kalman Filter for fusing the odometry, the GPS information and the IMU measurements. The path following system is based on the Pure Pursuit algorithm.[clarification needed]

NREC and Oshkosh Defense are developing autonomous unmanned ground vehicle technologies for logistics tactical wheeled vehicles used by the US Marine Corps. CARGO Unmanned Ground Vehicles (CARGO UGVs or CUGVs) are designed for autonomous use in convoys that combine manned and unmanned vehicles. An operator in another vehicle supervises one or more unmanned vehicles, which drive autonomously in convoy formation day and night, in all weather, and when dust and smoke limit visibility.

Sensabot is a rugged robot designed to safely carry out on-site inspections in hazardous environments, isolated facilities, and other places that are difficult or dangerous for personnel to access. Benefits include reduced risk and improved efficiency of operation.

The system features a mobile robotic base with a sensor boom tipped with inspection sensors. It can operate in extreme temperatures and explosive and toxic atmospheres. A human operator remotely operates the robot, and uses its sensors to inspect pipes, fittings, and valves. Sensabot is designed to meet IECEx Zone 1 standards for explosive environments and ANSI safety standards for guided industrial vehicles.[11]

NREC has worked with coal mining industry partners to develop operator assistance technology for longwall mining. This includes a complete navigation system for a continuous mining machine, laser rangefinder-based perception for robot localization, planning for cluttered spaces, and integration and simulation tools. This system was successfully demonstrated in a working mine in West Virginia. Related research and objectives include automated mine surveying, haulage and multiple-machine interaction.