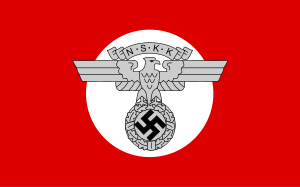 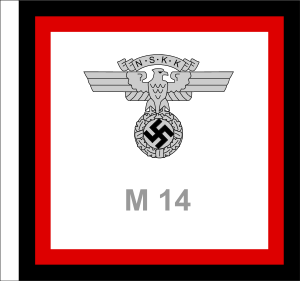 The National Socialist Motor Corps (German: Nationalsozialistisches Kraftfahrkorps, NSKK)[1] was a paramilitary organization of the Nazi Party (NSDAP) that officially existed from May 1931 to 1945. The group was a successor organization to the older National Socialist Automobile Corps (NSAK), which had existed since April 1930.

The NSKK served as a training organization, mainly instructing members in the operation and maintenance of high performance motorcycles and automobiles. The NSKK was further used to transport NSDAP and SA officials/members. The NSKK also served as a roadside assistance group in the mid-1930s, comparable to the modern-day American Automobile Association or the British Automobile Association. With the outbreak of World War II NSKK ranks were recruited to serve in the transport corps of various German military branches. It was the smallest of the Nazi Party organizations.

The primary aim of the Corps was to educate its members in motoring skills and to transport NSDAP and SA officials/members.[2] The members were mainly trained in the operation and maintenance of high performance motorcycles and automobiles. In the mid-1930s, the NSKK also served as a roadside assistance group, comparable to the modern-day American Automobile Association or the British Automobile Association.

Membership in the NSKK did not require any prior knowledge of automobiles and the group was known to accept persons for membership without drivers' licenses. It was thought that training in the NSKK would make up for any previous lack of knowledge. The NSKK did, however, adhere to Nazi racial doctrine and screened its members for Aryan qualities.

On 20 July 1934, three weeks after the major purge the SA suffered during the Night of the Long Knives, the 10,000 member strong NSKK was separated and promoted into an independent NSDAP organization.[3] From 1935 onward, the NSKK also provided training for Panzer crews and drivers of the German Army.[1] By 1938, the members underwent mechanics and operational training for both civilian and military type vehicles.[2]

With the outbreak of World War II in Europe on 1 September 1939, the National Socialist Motor Corps became a target for army recruitment, since NSKK members possessed knowledge of motorized transport, a coveted skill when the bulk of German ground forces relied on horses. The NSKK itself was formed into transport companies to move German Army troops, supplies and ammunition.[2]

Adolf Hühnlein was NSKK Korpsführer (Corps Leader) from 1931 until his death in 1942, when Erwin Krauss took over.[4] The Corps was disbanded in May 1945 and the group was declared a "condemned organization" at the Nuremberg Trials (although not a criminal one). This was due in part to the NSKK’s origins in the SA and the racial requirements for membership.