National Socialist Movement in the Netherlands

The National Socialist Movement in the Netherlands (Dutch: Nationaal-Socialistische Beweging in Nederland, Dutch pronunciation: [nɑtsjoːˈnaːl soːʃaːˈlɪstisə bəˈʋeːɣɪŋ ɪn ˈneːdərlɑnt], NSB) was a Dutch fascist and later national socialist political party. As a parliamentary party participating in legislative elections, the NSB had some success during the 1930s. It remained the only legal party in the Netherlands during most of the Second World War.

The NSB was founded in Utrecht in 1931 during a period when several nationalist, fascist and national socialist parties were founded. The founders were Anton Mussert, who became the party's leader, and Cornelis van Geelkerken. The party based its program on Italian fascism and German national socialism, however unlike the latter before 1936 the party was not anti-semitic and even had Jewish members. 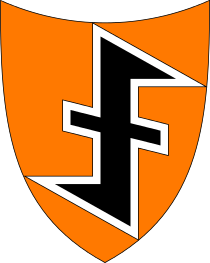 Emblem of the National-Socialist Movement in the Netherlands, 1931-1936

In 1933, after a year of building an organization, the party organized its first public meeting, a Landdag in Utrecht which was attended by 600 party militants. Here the party presented itself. After that the party's support began to grow. In the same year the government forbade civil servants to be members of the NSB.

In the provincial elections of 1935 the party gained 8 percent of the votes and two seats in the Senate. This result was achieved against the background of the economic hardship of the Great Depression. Mussert's image as a reliable politician and his pragmatism allowed him to unite the different types of fascism and contributed to the party's success. This was bolstered by the party's strong organization and its political strategy, which was not oriented towards violent revolution but a democratic legal take over of the country. In 1936, under influence of Meinoud Rost van Tonningen the party became openly anti-semitic. Rost van Tonningen began to question Mussert's leadership with support of the German Nazi Party, raising internal divisions within the party. This led to decreased support for the party and a strong anti-fascist reaction of the political parties, trade unions and churches. In the 1937 general elections the party gained only 4 percent of the votes and four seats in the House of Representatives, however it increased its representation in the Senate to five. In parliament the NSB MPs showed little respect for parliamentary procedures and rules. Many NSB MPs were called to order by the chairman of parliament for physical and verbal violence. In the provincial election of 1939 the party also gained 4 percent of the votes.

After the Second World War broke out, the N.S.B. sympathized with the Germans and advocated strict neutrality for the Netherlands. In May 1940, 800 NSB members and sympathizers were put in custody by the Dutch government,[1] after the German invasion. Soon after the Dutch defeat on 14 May 1940, they were set free by German troops. In June 1940, Mussert delivered a speech in Lunteren in which he called for the Netherlands to embrace the Germans and renounce the Dutch Monarchy, which had fled to London.

In 1940 the German occupation government had outlawed all socialist and communist parties; in 1941 it forbade all parties, except for the NSB. The NSB openly collaborated with the occupation forces. Its membership grew to about 100,000. The NSB played an important role in lower government and civil service; every new mayor appointed by the German occupation government was a member of the NSB. On the national level, Mussert had expected he would be made leader of an independent Dutch state allied to Germany; in reality, however, the Austrian national socialist Arthur Seyss-Inquart was in charge of an occupation government. Mussert had several meetings with Adolf Hitler in which he pleaded for an independent Netherlands, but he was unsuccessful. Although Seyss-Inquart had proposed that Mussert should be made Prime Minister of the Netherlands, he was only given the honorary title 'Leader of the Dutch People', and he was allowed to build a marginal State Secretariat, but he was given little or no actual power. His influence in the party waned at the expense of Rost van Tonningen and other more pro-German members. Beginning in the summer of 1943, many male members of the NSB were organized in the Landwacht, which helped the government control the population.

On 4 September 1944, the Allied forces conquered Antwerp and the NSB expected the fall of the Netherlands to come soon. On 5 September, most of the NSB's leadership fled to Germany and the party's organization fell apart, on what is known as Dolle Dinsdag (Mad Tuesday).

After the German signing of surrender on 6 May 1945, the NSB was outlawed. Mussert was arrested the following day. Many of the members of the NSB were arrested, but only a few were convicted. Mussert was executed on 7 May 1946.

There were no attempts to continue the organization illegally.

The NSB started out as a classical fascist party, which based itself on the principles of leadership. It wanted a fascist state with a compliant government, fascist order and state control. It put the "national interest" above the individual interest and the interest of social groups, (pillars) that had characterized Dutch society. The party was anti-parliamentary and authoritarian. Its program, which was modeled on the program of the German Nazi Party, lacked reference to anti-semitic or racist ideology of the Nazi Party. After 1936, under the influence of Meinoud Rost van Tonningen, the party became more oriented towards the Nazi Party and took over its anti-semitic and racist ideas. It also began to sympathize with the aggressive foreign policy of Italy and Germany.[2]

Practical demands of the NSB were: abolition of individual voting rights, corporatism, a duty to work and serve in the army, limits on the freedom of the press, laws against strikes. It demanded a reunification of the Netherlands with Flanders and French Flanders in a Greater Netherlands, which would also control a large colonial empire consisting of Belgian Congo, Dutch East Indies and perhaps South Africa.[3] This state would not be a part of Germany, but only an independent loyal ally to Germany.

The NSB copied elements of the Italian Fascists and German Nazis. Like Mussolini's Fascists, the NSB uniforms included black shirts, and the Party adopted the Fascist salute. Since 1933 it used the salute "Hou Zee!", which, Anton Mussert said, connoted courage and referred to the glorious maritime history of the Dutch Republic. It also began using titles like Leider for Mussert (Leader; similar to Duce or Führer), Kameraad for men (comrade) and Kameraadske ('comradess', a neologism) for women. One party slogan was "Mussert or Moscow", evoking the Fascist defense against supposed Communist subversion.[4] Although the Party later adopted the Nazi red and black colors and the swastika symbol, the original NSB flag used the Prince's Flag. A blue wolfsangel (a hooked symbol of a wolf trap) on a white disc was set against an orange field.[5]

This table shows the results of the NSB in elections to the House of Representatives (lower house), the Senate, the States-Provincial, and the party's political leadership: the fractievoorzitter, is the chair of the parliamentary party and the lijsttrekker is the party's top candidate in the general election, these posts are normally taken by the party's leader. The membership of NSB is also represented. The House of Representatives then had 100 members.

** leader in the Senate

Before 1940 the NSB held seats in provincial and municipal legislatures, but did not cooperate in any governments. After 1940 these legislatures stopped functioning and the NSB's role in local and provincial legislatures expanded. All newly appointed mayors were member of the NSB.

The following figure shows the election results of the provincial elections of 1935 and 1939, per province. It shows the areas where the NSB was strong, namely in South Holland, North Holland and Gelderland. The NSB was the strongest in Drenthe and Limburg. In 1935, it became the second largest party in Limburg. The party was weaker in Friesland, North Brabant and Zeeland.

In 1939, on the eve of the Second World War, the party lost nearly half of its provincial seats.

The NSB drew its main support from the middle class: civil servants, farmers, business people and soldiers supported the party. Most of these people were not part of the strong pillarized organisations surrounding the socialist unions, and the Protestant and Catholic Churches, instead they were often a loose member of the weaker liberal pillar, which was very diverse. The NSB party scored particularly well in Drenthe, Gelderland and the towns of Limburg at the border with Germany.

Historians Loe De Jong and A.A. De Jonge have characterized NSB members as socially isolated opportunists who were motivated to join the NSB through a mix of opportunism, idealism and social connections.[6]

The party was organized with Mussert serving as party chair and political leader. Yearly the party organized a Landdag, where Mussert held a political speech.

The NSB was surrounded by several party organizations. It published a weekly newspaper, Volk en Vaderland ("Folk and Fatherland"). Between 1931 and 1935 the party had its own paramilitary organization, the black uniformed Weerbaarheidsafdeling (WA), similar to the Sturmabteilung of the Nazi Party. It was refounded in 1940.[8] It also founded its own youth organization, Jeugdstorm (Youthstorm); a farmers' organization; and a daily newspaper, Het Nationale Dagblad (The National Daily).

In 1940 the NSB formed a Nederlandsche SS (Dutch SS) from its own ranks. 50,000[citation needed] Dutch people joined it.

The term "NSB'er" has become synonymous with traitor in the Netherlands, and is used as an insult.

A grim joke after World War II, made by Dutch Resistance fighters, is that former NSB members insisted that their acronym actually stood for "Niet So [zo] Bedoeld" or "I didn't mean it" as they attempted to downplay their treachery.

Relationships to other parties

The NSB was methodically isolated by other parties. Before the war the socialist Social Democratic Workers' Party and Nederlands Verbond van Vakverenigingen (Dutch Association of Trade Unions) coordinated counter-demonstrations and propaganda with a separate organization 'Freedom, Labour and Bread'.