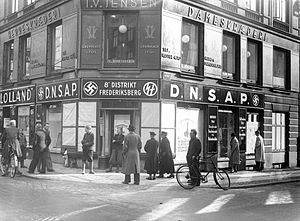 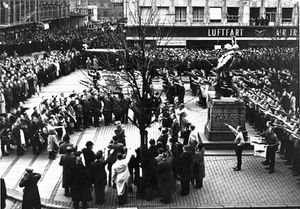 DNSAP 's parade at Rådhuspladsen November 17, 1940. The parade was held in connection with DNSAP 's attempt to seize power 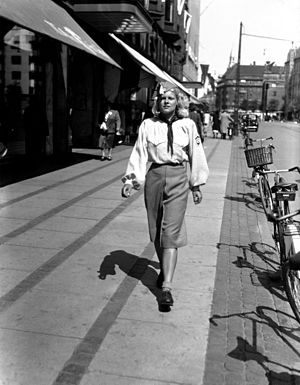 Danmarks Nationalsocialistiske Arbejderparti (DNSAP; English: National Socialist Workers’ Party of Denmark) was the largest Nazi party in Denmark before and during the Second World War.

The party was founded on 16 November 1930, after the success of the Nazis in the German Reichstag elections of that year. The party mimicked the National Socialist German Workers' Party (Nazi Party) in Germany, including the use of the swastika and Hitler salute, the naming of their fighting force as SA, and even the singing of a translated version of the Horst Wessel Song. The party was antisemitic, though not to the same degree as the German Nazis.[1]

The party had other differences with the Germans; as Danish nationalists, they wanted the Danish border to grow to the south to take in the whole of the historical Duchy of Schleswig, a move which would have brought more ethnic Germans under Danish rule. The DNSAP considered the Germans of North and South Schleswig to be in reality Germanized Danes, who could be politically led back to their Danish origin.[2] The Germans wanted to incorporate the northern portion of Schleswig into the German state. The DNSAP was also supportive of the principles of loyalty to the Danish monarchy and the Church of Denmark.[1]

The party was initially led by Cay Lembcke, although they attracted no more than a few hundred members under his leadership and failed to gain even minor support in the elections of 1932.

Lembcke was replaced in 1933 by Frits Clausen, who concentrated the activities in his home territory of North Schleswig, where the bulk of support for the DNSAP was to come from. At the 1939 elections, with about 5000 members, the party won three seats in the Folketing (parliament), corresponding to 1.8% of the popular vote.[1]

DNSAP supported Hitler's invasion and subsequent occupation of Denmark on 9 April 1940. A transition to Nazi government in Denmark was considered by the German administrator, Cecil von Renthe-Fink, in the end of 1940, but due to the policy of co-operation with the legitimate Danish government, it was deemed better to wait until Germany had won the war, although DNSAP did receive some financial and political support from Germany.

A rare victory for the DNSAP was its role in organizing the recruitment for Waffen SS and Frikorps Danmark (Free Corps Denmark). The DNSAP was not included in the wartime coalition government (1940–1943) and at the 1943 elections it barely improved on its pre-war performance, winning only 2.1% of the votes cast and three seats in the Folketing. The day after the election, the disappointed Clausen renounced German financial support, intending to take a more purely Danish national line.[1]

After the end of the Second World War, the party was officially dissolved in May 1945, and lost almost all of its popular support. However, a few individuals continued their work under the old party name. The current National Socialist Movement of Denmark traces its origins back to the DNSAP.