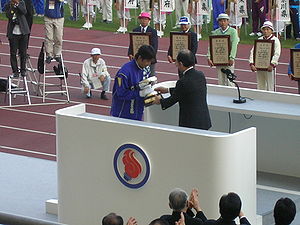 The National Sports Festival of Japan (国民体育大会, Kokumin Taiiku Taikai?) is the national premier sports event of Japan. It consists of three stages. The skating and ice hockey stage takes place in January, the skiing stage takes place in February, and the main Autumn tournament takes place in September and October. Its name is often abbreviated to Kokutai (国体).

The predecessor to the tournament was the Meiji Shrine tournament held from 1924 until 1943, a period including the Pacific War. Since then there was a Summer tournament that focused on swimming, and an Autumn tournament that focused on track-and-field; however from the 61st tournament in 2006, the Summer and Autumn tournaments were combined. On 20 December 2006 the Japan Sports Association, as the committee for the tournament, decided that swimming was to be held before mid-September as of and beyond the 64th tournament in 2009, though this actually came into effect in the 63rd tournament, in 2008. This took into account the peculiar qualities of holding swimming events. Also the golf tournament was moved forward in the schedule.

At first, the summer and autumn tournaments were planned to always be held in Kansai, but after the first tournament in 1946, Ishikawa prefecture were presented the opportunity to host the second tournament. The host prefecture was then rotated throughout Japan.

File:Kokutai logo.png
The official logo of the National Sports Festival of Japan

The logo was created for the 2nd tournament in 1947. The logo is a red torch leaning at a 30-degree incline to the right, wrapped in a blue Obi.

Ever since the second tournament in 1947 the song Young Power (若い力, Wakai Chikara?), written by Takao Saeki and composed by Shinichi Takada, has been played at the opening and closing ceremonies of all large scale sporting events. Furthermore, it is played at an opening ceremony in which the Emperor and Empress are both in attendance. At the Autumn tournament there is a torch relay following which a main torch is lit and burns until the closing ceremony. Previously there was also an opening ceremony at the Winter tournament, but in line with changes to the tournament from 2010 it was changed to a smaller and simpler starting ceremony.

As well as the two main trophies, each event awards trophies and certificates to victorious athletes.

Ever since the 1964 tournament in Niigata, the host team winning the Emperor's Cup and Empress's Cup has generally become the norm. This is not simply down to that team's preliminary scores, but by a number of factors including the ability to field athletes in every competition and the ability to strengthen athletes with the funding going into newly institutions such as venues and event management. In fact, Nobu Nishimura, the lieutenant governor of Yamaguchi prefecture which hosted the 2011 tournament, said at a party "the hosts have an advantage in events with flagmen (events where the result is decided by officials)" and "even if there's "cheating" they will take first place". When he was criticised, he explained his position by saying "I meant the tendency where host prefectures have an advantage, not that it's ok to break the rules".[3]

In a move counter to this custom, as a result of then Kōchi prefecture governor, Daijirō Hashimoto, abosolishing it at the 2002 Kochi hosted tournament, host prefecture Kōchi finished in 10th place with Tokyo winning overall. However, this is the only time such an occasion as occurred.

Recently many host prefectures have built large scale venues in which to host various events, with a large focus on appearance. Examples include Nagai Stadium, Miyagi Stadium, Ōita Bank Dome, Tohoku Electric Power Big Swan Stadium, Shizuoka Stadium and International Stadium Yokohama. These were generally acknowledged as being built for the 2002 FIFA World Cup, but in reality their construction purpose was to be the main arena of the tournaments (however the International Stadium Yokohama was built with the intention of potentially hosting an Olympic games, and Nagai Stadium was renovated rather than built from scratch). The aforementioned arenas are also sometimes used as a base for J. League football teams based within the prefecture, but other arenas are not used very often following the tournament. In spite of no large scale events being anticipated as taking place there following the tournament, large amounts of tax payer money continues to go toward its maintenance.

On 26 December 1945 at the Kishi Memorial Gymnasium, Ryōzō Hiranuma (director of the Japan Sports Association), Izutarō Suehiro (chairman of the Japan Swimming Federation), Sanburō Kiyose, Tatsuo Hisatomi and Keijirō Ishida, who had all held important sporting administrative positions since before the war, proposed holding a national athletics event during talks about how sporting events could take place in the post war period.

In 1946, the group had informal talks with Hiromu Kasuga, the chairman of the Kansai Sports Federation, and formed a board of directors. After having their proposal examined and approval gained from GHQ, they received 400,000 yen from the government to help with costs, and the first tournament was held.

Awarding the Emperor's Cup and Empress's Cup has depend on the prefecture. In the first, second, and the special tournament in 1973, neither were awarded. In the 6th, 7th and 8th tournaments, the winter tournament was split from the summer and autumn tournament. In the 9th tournament, it was divided further by separating the swimming tournament.

Any prefecture that was able to host the winter, summer and autumn tournaments have a ☆ mark at the start of their tournament names.

The tournament names are generally a reference to the autumn tournament. It is possible that the winter tournaments had a different name, especially if they were held elsewhere.

Tournaments in blue show where the host did not win the Emperor's Cup.

File:12Th National Sports Festival of Japan .JPG
A commemorative stamp from the 12 tournament (1957)

Each tournament normally has a unique mascot character to help build support and encourage good PR. The first mascot was a nameless goat for the 30th tournament (1975) in Mie prefecture, though it was referred to as pet-mark. In the 38th tournament, hosted in Gunma in 1983, the first named character, a horse called Gunma-chan, was used. From then on, having a named character became the norm. There were no characters between from the 31st to the 37th tournaments.

Recently, owing to the "Yuru-chara" boom, mascot characters commonly become official mascots of the prefecture in some capacity. There are many mascots who were already established as prefectural mascots prior to the tournament itself.

At the opening and closing ceremonies the ceremonial music used is produced for each tournament, with it being performed when the torch and athletes enter the arena.

In addition to this, it is often the case where a singer with a strong local connection will sing, along with songs which match the theme of the tournament.

Events in bold have taken place since the first tournament.

There are normally around 20 exhibition events held at the Autumn tournament. The trend is to hold events that make the best use of local features.