The National Teachers Hall of Fame (NTHF) is a non-profit organization that honors exceptional school teachers. It was founded in 1989 by Emporia State University, the ESU Alumni Association, the City of Emporia, Emporia Public Schools, and the Emporia Area Chamber of Commerce. The NTHF has a museum on Emporia State's campus that honors the teachers inducted. It also has a teacher resource center, and a recognition program, which recognizes five of the nation's most outstanding educators each June.[1] The Hall of Fame annually honors five teachers who have demonstrated commitment and dedication to teaching children. The first induction of five teachers was held in June 1992. To date, 120 teachers have been inducted into The National Teachers Hall of Fame representing 37 states and the District of Columbia.[1] 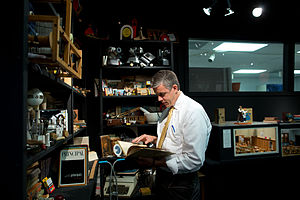 U.S. Department of Education Secretary Arne Duncan looks at a copy of Helpful Hints for the Rural Teacher at the National Teachers Hall of Fame in 2012

Hall of Fame inductees will receive the following awards each year:[2]

Educators inducted into the Hall of Fame include:[2]

On June 13, 2013, the NTHF executive director Carol Strickland, along with former ESU President Michael Shonrock, Bill Maness, representing U.S. Sen. Jerry Moran, and former mayor Rob Gilligan, broke ground by the one-room school house located on the Emporia State campus to build a memorial for the teachers that have fallen in the "line of duty". The Sandy Hook Elementary School shooting was the main inspiration for the memorial.[4] On June 6, 2014, the granite memorial markers were placed along with granite benches.[5] The official dedication was on June 12, 2014.[6]

One in a Million – Teachers Who Make a Difference initiative

This is a nationwide campaign sponsored by the NTHF which encourages citizens of The United States to honor a favorite teacher or one who has made a difference in their life. For a minimum donation of one dollar, one can fill out the downloadable form from the NTHF website[9] and submit their donation and nomination. In turn, the Hall of Fame will permanently preserve the teacher's name and information on a special webpage as well as in the National Teachers Hall of Fame Museum in Emporia, Kansas. This is a way to say "thank you" to those who have influenced lives from across the nation and to preserve the teaching legacies of those classroom heroes. The goal of this campaign is to raise awareness of the Hall of Fame and of the importance of the teaching profession.[10]