The National Topographic System or NTS (French: Système national de référence cartographique) is the system used by Natural Resources Canada for providing general purpose topographic maps of the country. NTS maps are available in a variety of scales, the standard being 1/50,000 and 1/250,000 scales.[1] The maps provide details on landforms and terrain, lakes and rivers, forested areas, administrative zones, populated areas, roads and railways, as well as other man-made features.[2] These maps are currently used by all levels of government and industry for forest fire and flood control (as well as other environmental issues), depiction of crop areas, right-of-way, real estate planning, development of natural resources and highway planning. 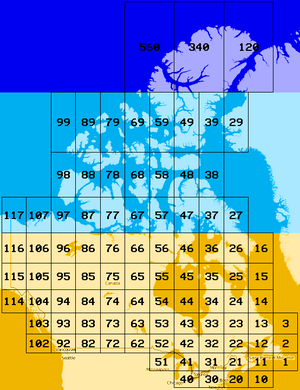 All map series span four degrees of latitude, but are split differently east-to-west depending on the zones they are located in. Map series in the Southern and Arctic zones span eight degrees of longitude, while those in the High Arctic zone span sixteen degrees of longitude. The NTS designates the southernmost set of map series, from 40 to 44 degrees north latitude, with numbers that end with the digit 0, using 10, 20, 30 and 40. The third row, ending with the digit 2, spans from 2, 12, 22, 32 and so on to 102 off the west coast, while the fifth, sixth and seventh rows extend furthest west, using 115, 116 and 117.

Map areas in a series are assigned letters in a sinusoidal pattern starting in the southeastern part of the series. In the Southern zone, the letters run from A through P, while in the Arctic and High Arctic zones, they run from A through H.

Each map area in turn is split into sixteen map sheets, numbered from 1 through 16 in an identical sinusoidal pattern to the map areas.