National Trust for Places of Historic Interest or Natural Beauty

The trust was founded in 1895 and given statutory powers, starting with the National Trust Act 1907. Historically, the trust tended to focus on English country houses, which still make up the largest part of its holdings, but it also protects historic landscapes such as in the Lake District, historic urban properties, and nature reserves.

The trust describes itself as "a charity that works to preserve and protect historic places and spaces—for ever, for everyone."[2] It owns many heritage properties, including historic houses and gardens, industrial monuments, and social history sites. It is one of the largest landowners in the United Kingdom, owning many beauty spots, most of which are open to the public free of charge. It is the largest membership organisation in the United Kingdom, and one of the largest UK charities by income and assets.

Its formal purpose is:

In the early days, the trust was concerned primarily with protecting open spaces and a variety of threatened buildings; its first property was Alfriston Clergy House, and a decorative cornice there may have given the trust its sprig of oak symbol.[citation needed] The trust's first nature reserve was Wicken Fen, and its first archaeological monument was White Barrow.

The trust has been the beneficiary of numerous donations of property and money. From 1924 to 1931, the trust's chairman was John Bailey, of whom The Times said in 1931, "The strong position which the National Trust now occupies is largely due to him, and it will perhaps never be known how many generous gifts of rural beauty and historic interest the nation owes, directly or indirectly, to his persuasive enthusiasm."[5] At the same time, a group of anonymous philanthropists set up the Ferguson's Gang; they wore masks and carried sacks of money, and their use of unusual pseudonyms such as Bill Stickers and Red Biddy caught the public's attention, bringing awareness to the increasing threat of urbanisation.[6] 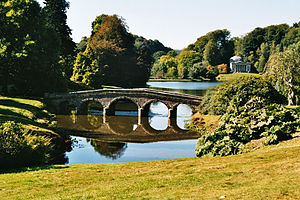 One of the most visited National Trust properties is Stourhead, with its classic landscape garden.

The focus on country houses and gardens, which now comprise the majority of its most visited properties, came about in the mid 20th century when the private owners of many of the properties were no longer able to afford to maintain them. Many were donated to the trust in lieu of death duties. The diarist James Lees-Milne is usually credited with playing a central role in the main phase of the trust's country house acquisition programme, though he was in fact simply an employee of the trust, and was carrying through policies already decided by its governing body.[7] 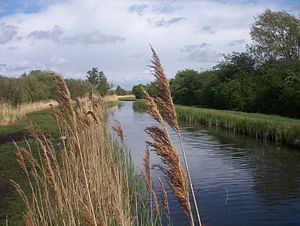 One of the biggest crises in the trust's history erupted at the 1967 annual general meeting, when the leadership of the trust was accused of being out of touch and placing too much emphasis on conserving country houses. In response, the council asked Sir Henry Benson to chair an advisory committee to review the structure of the trust. Following the publication of the Benson Report in 1968, much of the administration of the trust was devolved to the regions.[citation needed]

In the 1990s, a dispute over whether deer hunting should be permitted on National Trust land caused bitter disputes within the organisation, and was the subject of much debate at annual general meetings, but it did little to slow the growth in its membership numbers.

In 2005, the trust moved to a new head office in Swindon, Wiltshire. The building was constructed on an abandoned railway yard, and is intended as a model of brownfield renewal. It is named Heelis, taken from the married name of children's author Beatrix Potter, a huge supporter of, and donor to, the trust, which now owns the land she formerly owned in Cumbria.[8]

The trust is an independent charity rather than a government institution. Historic England and its equivalents in other parts of the United Kingdom are government bodies that perform some functions which overlap with the work of the National Trust.

It was founded as a not-for-profit company in 1895 but was later re-incorporated by a private Act of Parliament, the National Trust Act 1907. Subsequent acts of Parliament between 1919 and 1978 amended and extended the trust's powers and remit. In 2005, the governance of the trust was substantially changed by the Charity Commission.[3]

The trust is governed by a twelve-strong board of trustees, appointed and overseen by a council of twenty-six people elected by the members of the trust, and twenty-six appointed by other organisations whose work is related to that of the trust, such as the Soil Association, the Royal Horticultural Society and the Council for British Archaeology.[9]

At an operational level, the trust is organised into regions which are aligned with the official local government regions of the UK. Its headquarters are in Swindon.

For the year ended 28 February 2015, the trust's total income was £494 million, up from £460 million in 2013–14. The largest sources of income were membership subscriptions (£161 million), direct property income (£145.1 million) and legacies (£50.5 million). In addition, the trust receives money from its commercial arm, National Trust Enterprises Ltd, which undertakes profit-making activities such as running gift shops and restaurants at NT properties. The organisation has cash and financial investments of £1.127 billion, a 7.5% increase on the previous year.[1] 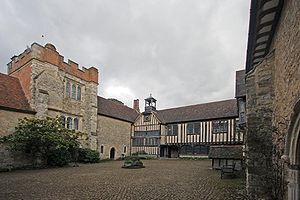 Ightham Mote, built around 1320, is a Grade I listed building, and parts of it are a Scheduled Ancient Monument.

The trust is one of the largest membership organisations in the world, and annual subscriptions are its most important source of income. Membership numbers have grown from 226,200 when the trust celebrated its 75th anniversary in 1970 to 500,000 in 1975, 1 million in 1981, 2 million in 1990, and by 2015, membership had reached 4.24 million.[1] Members are entitled to free entry to trust properties that are open to the public for a charge.[10] There is a separate organisation called the Royal Oak Foundation for American supporters.

The members elect half of the council of the National Trust, and periodically (most recently, in 2006) vote on the organisations which may appoint the other half of the council.[11] Members may also propose and vote on motions at the annual general meeting, although these are advisory and do not decide the policy of the trust.

The trust is heavily supported by volunteers, who, as of 2013, numbered approximately 70,000, contributing 3.77 million hours of work, worth an estimated £29.2 million.[12] Volunteering experiences are wide and varied, ranging from helping in its historic houses and gardens, to fund-raising and providing specialist skills.[13] The trust is a member of NCVYS in recognition of its work for the personal and social development of young people.[14] 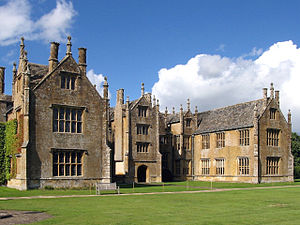 Barrington Court, one of the first two historic houses owned by the Trust.[7]

The trust owns 200 historic houses that are open to the public. The majority of them are country houses, and most of the others are associated with famous individuals. The majority of these country houses contain collections of pictures, furniture, books, metalwork, ceramics and textiles that have remained in their historic context. Most of the houses also have important gardens attached to them, and the trust owns some important gardens not attached to a house. The properties include some of the most famous stately homes in the country and some of the key gardens in the history of British gardening.

The trust acquired the majority of its country houses in the mid 20th century, when death duties were at their most punitive. James Lees-Milne was secretary of the trust's Country House Committee in the key period either side of World War II. The arrangements made with families bequeathing their homes to the trust often allowed them to continue to live in the property.[7] Since the 1980s, the trust has been reluctant to take over large houses without substantial accompanying endowment funds, and its acquisitions in this category have been less frequent.[7]

In recent years, the trust has sought to broaden its activities and appeal, mainly by acquiring historic properties such as former mills (early factories), workhouses and the childhood homes of Paul McCartney and John Lennon.[7] 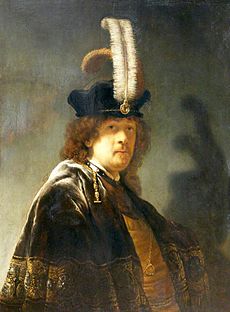 Rembrandt's self-portrait, formally attributed to him in March 2013

Since its founding in 1895, the trust has gradually expanded its collection of art, mostly through whole property acquisitions. Since 1956, there has been a Curator of Pictures and Sculpture.[15] The first was St John (Bobby) Gore, who was appointed "Adviser on Paintings" in 1956. He published catalogues of the pictures at Upton, Polesden Lacey, Buscot, Saltram and Ascott.[16] His successor in 1986 was Alastair Laing, who cared for the works of art at 120 properties and created the exhibition In Trust for the Nation, held at the National Gallery in 1995–96.[15] Since 2009, the curator has been David Taylor, who has approved photos of the trust's 12,567 oil paintings to be included in the Public Catalogue Foundation's searchable online archive of oil paintings, available since 2012.[17] Use of the publicly available website was probably instrumental in the discovery of Rembrandt's Self-portrait wearing a white feathered bonnet which is now displayed at Buckland Abbey near Yelverton in Devon.

This discovery is the second Rembrandt to have found its way into the collection; the first was the portrait of Catrina Hooghsaet at Penrhyn Castle, which was added to the collection after the Rijksmuseum in the Netherlands failed to acquire it in 2007.[18] 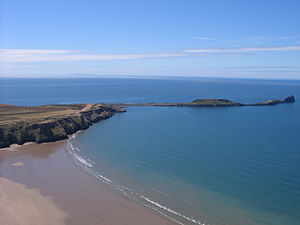 Cliffs and Worm's Head at Rhossili

The National Trust is the largest private landowner in the United Kingdom.[19] The trust's land holdings account for more than 610,000 acres (985 square miles, 2550 km²), mostly of countryside, and covering nearly 1.5% of the total land mass of England, Wales and Northern Ireland.[20] A large part of this consists of parks and agricultural estates attached to country houses, but there are many countryside properties which were acquired specifically for their scenic or scientific value. The trust owns or has covenant over about a quarter of the Lake District;[19] it has similar control over about 12% of the Peak District National Park (e.g. South Peak Estate and High Peak Estate).[19] It owns or protects roughly one fifth of the coastline in England, Wales and Northern Ireland (704 miles, 1126 km), and has a long-term campaign, Project Neptune, which seeks to acquire more.[20]

The National Trust Acts grant the trust the unique statutory power to declare land inalienable. This prevents the land from being sold or mortgaged against the trust's wishes without special parliamentary procedure. The inalienability of trust land was over-ridden by Parliament in the case of proposals to construct a section of the Plympton bypass through the park at Saltram, on the grounds that the road proposal had been known about before the park at Saltram was declared inalienable.[21]

The Acts also give the trust the power to make bylaws to regulate the activities of people when on its land. All photography at National Trust properties, other than that for private and personal use or for entry into approved competitions, is strictly prohibited,[22][23] except for social networking sites such as Flickr.[24] Visitors are instead directed to request images from the National Trust Photo Library. 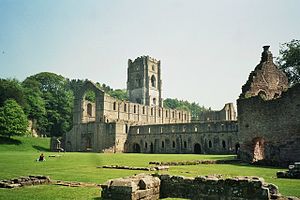 Fountains Abbey in Yorkshire, the fifth-most visited National Trust property for which an admission charge is made as of 2015