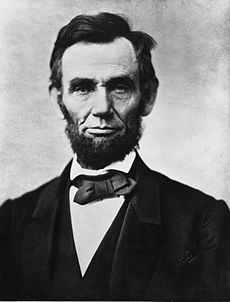 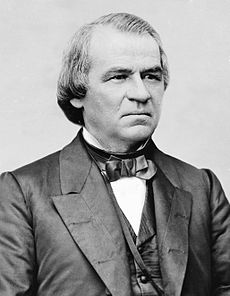 The National Union Party was the name used by the Republican Party for the national ticket in the 1864 presidential election, held during the Civil War. State Republican parties, for the most part, did not change their name.[1]

The temporary name was used to attract War Democrats and Border State Unionists who would not vote for the Republican Party. The party nominated incumbent President Abraham Lincoln and Democrat Andrew Johnson, who were elected in a landslide.

The National Union Party was created in 1864 prior to the end of the Civil War. A faction of anti-Lincoln Radical Republicans held the belief that Lincoln was incompetent, and therefore could not be re-elected. A number of Radical Republicans formed a party called the Radical Democracy Party, and a few hundred delegates convened in Cleveland starting on May 31, 1864, eventually nominating John C. Frémont, who had also been the Republicans' first presidential standard-bearer during the 1856 U.S. presidential election.

Republicans loyal to Lincoln created a new name for their party in convention at Baltimore, Maryland during the first week in June 1864, in order to accommodate the War Democrats who supported the war and wished to separate themselves from the Copperheads. This is the main reason why War Democrat Andrew Johnson was selected to be the Vice Presidential nominee; then-current Vice President Hannibal Hamlin was not nominated. The National Unionists supporting the Lincoln-Johnson ticket also hoped that the new party would stress the national character of the war.

The convention's temporary chairman, Robert Jefferson Breckinridge of Kentucky, explained that he could support Lincoln on this new ticket because:[2]

As a Union party I will follow you to the ends of the earth, and to the gates of death. But as an Abolition party, as a Republican party, as a Whig party, as a Democratic party, as an American [Know-Nothing] party, I will not follow you one foot.

News of his nomination at the 1864 National Union Convention elicited Lincoln's famous response on June 9, 1864:

I am very grateful for the renewed confidence which has been accorded to me, both by the convention and by the National [Union] League. I am not insensible at all to the personal compliment there is in this; yet I do not allow myself to believe that any but a small portion of it is to be appropriated as a personal compliment. The convention and the nation, I am assured, are alike animated by a higher view of the interests of the country for the present and the great future, and that part I am entitled to appropriate as a compliment is only that part which I may lay hold of as being the opinion of the convention and of the League, that I am not entirely unworthy to be instructed with the place I have occupied for the last three years. I have not permitted myself, gentlemen, to conclude that I am the best man in the country; but I am reminded, in this connection, of a story of an old Dutch farmer, who remarked to a companion once that 'it was not best to swap horses when crossing streams.'

In August 1864, Lincoln wrote and signed a pledge that, if he should lose the election, he would nonetheless defeat the Confederacy by an all-out military effort before turning over the White House:[3]

This morning, as for some days past, it seems exceedingly probable that this Administration will not be re-elected. Then it will be my duty to so co-operate with the President elect, as to save the Union between the election and the inauguration; as he will have secured his election on such ground that he cannot possibly save it afterward.[4]

Lincoln did not show the pledge to his cabinet, but asked them to sign the sealed envelope.

The complexion of the war changed as the election approached. Confederate Commander Robert E. Lee's last victory in battle occurred June 3, 1864, at Cold Harbor. Union General Ulysses S. Grant's aggressive tactics trapped Lee in the trenches defending Richmond. Admiral David Farragut successfully shut down Mobile Bay as a Confederate resource in the Battle of Mobile Bay, August 3–23, 1864. Most decisive of all, Union General William Tecumseh Sherman captured Atlanta on September 1, 1864, convincing even the pessimists that the Confederacy was collapsing.[5]

Frémont and his fellow Republicans hated their former ally, U.S. Postmaster General Montgomery Blair. Frémont, aware that his candidacy could result in victory for the Democrats, made a deal to drop out of the presidential race in exchange for Blair's removal from office. On September 22, 1864, Frémont dropped out of the race. On September 23, Lincoln asked for, and received, Blair's resignation. The National Union ticket went on to win handily in the election of 1864, defeating the Democratic ticket of General George B. McClellan, whom Lincoln had previously relieved of his command, and George H. Pendleton.

In the 1864 Congressional Elections, the party won 42 Senate seats (out of 54 senators seated, not including vacancies due to the secession of Confederate states), and 149 seats (out of 193) in the House of Representatives.[6] These candidates ran under various party names, including National Union, Republican and Unconditional Union, but were part of the overall Republican/National Union effort.[7]

Upon Lincoln's death in 1865, Andrew Johnson became the only other National Union President.

After the bitter break with the Republicans in Congress over Reconstruction policies, Johnson used federal patronage to build up a party of loyalists, but it proved to be unsuccessful.[8] Johnson's friends sponsored the 1866 National Union Convention in August 1866 in Philadelphia as part of his attempt at maintaining a coalition of supporters. The convention sought to bring together moderate and conservative Republicans and defecting Democrats and forge an unbeatable coalition behind President Andrew Johnson and his Reconstruction policy.[9]

In the fall of 1866 Johnson embarked upon a speaking tour (known as the "Swing Around the Circle") before the 1866 Congressional elections to attempt to garner support for his policies. His swing was heavily ridiculed and proved ineffective as more of his opponents were elected. Republican National Committee chairman Henry Jarvis Raymond (1864–1866) lost the regard of the Republicans for his participation in the convention. The National Union movement became little more than the Democratic Party in a new form as Republicans left the movement and returned to the old party fold by the fall.[10]

The last congressman to represent the National Union Party ended his affiliation with the party in March 1867. Andrew Johnson was impeached by the Republican-led House of Representatives in 1868, and he was acquitted in the United States Senate by one vote. Upon the 1869 expiration of Johnson's only term as U.S. President, the National Union Party came to an end. The platform adopted at the 1868 Republican National Convention strongly repudiated President Johnson,[11] while the platform adopted by the 1868 Democratic National Convention thanked Johnson.[12] Johnson received dozens of votes on the first ballot of the Democratic convention, but the party ultimately nominated Horatio Seymour. Meanwhile, the mainline Republicans decided at their 1868 national convention to use the term the "National Union Republican Convention." The 1868 National Union Republican delegates nominated Ulysses S. Grant for President and his running mate Schuyler Colfax for Vice President. In 1872, all reference to "Union" had disappeared.[13] Historians regard the initial National Union coalition assembled in 1864 as part of the Republican Party lineage and heritage.[14]