The Universidad Nacional de Colombia (English: National University of Colombia), is a public, national, coeducational, research university, located primarily in Bogotá, Medellín, Manizales and Palmira, Colombia. Established in 1867 by an act of the Congress of Colombia,[2] the university is the largest higher education institution of the country with more than 44,000 students, the largest number of graduated professionals per year, and number of academic programmes at undergraduate and postgraduate levels, with 423 academic programmes, which includes 94 graduate diplomas, 61 Academic specializations, 38 medical specialties, 131 Master's degrees, and 46 doctorates. It is also one of the few universities that employs post-doctorate fellows in the country. Approximately 40,000 students are studying for an undergraduate degree and 4,000 for a graduate degree. The National University of Colombia is widely known as the best university of Colombia, for its high degree of education.

The university is a member of the Association of Colombian Universities (ASCUN),[3] the Iberoamerican Association of Postgraduate Universities (AUIP),[4] and the Iberoamerican University Network Universia. Along with Antioquia and Valle universities, it conforms what is known as the Golden Triangle of higher education in Colombia,[5] being among the most selective and competitive universities in the country. A study by Universia found it to be the Colombian university producing the largest number of scientific papers published in peer-refereed publications in 2005, and the 45th most prolific in Latin America.[6][7] Furthermore, according to the Latinamerican Web Ranking of Universities, the National University of Colombia ranked in the first place of the country in internet presence, and among the first universities in the region.[8] Regarding the CIVETS universities, the National University occupied the fifth place.[9]

The University City of Bogotá (Spanish: Ciudad Universitaria de Bogotá), also known as the White City (Spanish: Ciudad Blanca), is the main campus for the University. It is located in the Teusaquillo locality, northwest of the historical centre. It is also the largest campus in Colombia, with an extension of 1,200,000 m2 (300 acres) and a constructed area of 308,541 m2 (76.242 acres), making it an ample campus with several green areas, open spaces, and pedestrian paths. Among its buildings there are 17 which have been declared national monuments and, as a whole, it is a representation of the last 60 years of architecture in Colombia. 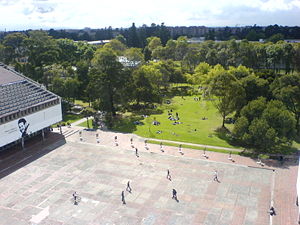 The campus was designed by German architects Fritz Karsen and Leopold Rother, and its construction began in 1935, under the government of Alfonso López Pumarejo. It is organized as an ellipse, divided in five parts, each containing one of the academic divisions and its respective dependencies. From Aerial view it can see the shape of an owl that is emblematic of a deep connection with wisdom and intuitive knowledge. The buildings were constructed as prismatic blocks, and painted white, in order to give an austere and clean look.

Some landmarks in the campus are the León de Greiff Auditorium, and the Francisco de Paula Santander Plaza, also known unofficially as the "Central Plaza" or the "Ché Plaza", in honor of Ernesto el Ché Guevara. The campus has its own stadium, where sometimes matches for the national soccer championship are held.

The National University of Colombia, Medellín has two campuses which are: Central Campus and Campus Robledo, in which 10,447 students study. This site provides approximately 29% of the seats for new students at nacional. Also this site has 555 faculty professors, of which 38% are doctors, 44% are master's, 8% were specialists and 10% are Profesionals. This site offers 26 undergraduate and 73 graduate and categorized : 15 PhDs, 28 Masters and 29 specializations.

Its history has given Medellín a peculiar character, since it was formed as most of their universities from the classic degrees of Law, Medicine, Arts and Sciences.

The site grew out of engineering programs, which is why today, the Medellín has the highest number of engineering (17) of the National University of Colombia and Colombia in general, being so, from the past, leading in the development, teaching and application of engineering in Colombia.

Central Campus: Located northwest of downtown, between Cerro Ecoparque the Flyer and the Medellín River. It is since 1938 the headquarters of the National University of Colombia in Medellin when the School of Tropical Agriculture (now the Faculty of Agricultural Sciences) joined the University. The Central Campus is made up of the Nucleus The Rocket which has a 272,982 m² area, the heart of Rio that has an area of 31,758 m² and a portion of Cerro El Flying around 269,257 m² that belongs to the Universidad.14 is highlights the Entomological Museum founded in 1937, the Museum of Mycology founded in 1987, the Herbarium "Gabriel Gutierrez," the wood collection, the Central Library "Efe Gomez" as attractive artistic and architectural highlights, the Totem Mythic created by Master Pedro Nel Gomez, Block 41 declared a National Cultural, designed by Engineer Jesús Montoya Mejía which began in 1931, the Block 11 Master designed by Pedro Nel Gómez. 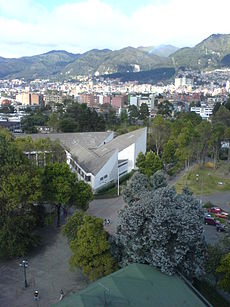 The National University of Colombia has 20 schools distributed among Bogotá, Medellín, Manizales and Palmira:

High school (for children of professors, students, and employees):

Famous personalities among its alumni include: