The National Women's Hall of Fame is an American institution created in 1969 by a group of people in Seneca Falls, New York, the location of the 1848 Women's Rights Convention. The mission of the Hall is "to honor in perpetuity those women, citizens of the United States of America, whose contributions to the arts, athletics, business, education, government, the humanities, philanthropy and science, have been the greatest value for the development of their country." 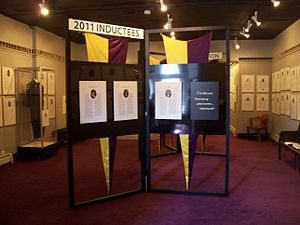 Interior of the Hall of Fame

The National Women's Hall of Fame inducts distinguished American women through a rigorous national honors selection process involving representatives of the nation's important organizations and areas of expertise. Nominees are selected on the basis of the changes they created that affect the social, economic or cultural aspects of society; the significant national or global impact and results of change due to their achievement; and the enduring value of their achievements or changes.

The Hall was hosted by Eisenhower College until 1979, when the organization purchased an historic bank building in the Seneca Falls Historic District and renovated it to house the Hall's permanent exhibit, historical artifacts, and offices. The Hall is located at 76 Fall Street, near the Women's Rights National Historical Park which was established at the site of the 1848 Convention. The Hall is now in the process of a capital campaign for a new location, an 1844 knitting mill associated with the abolitionist movement.