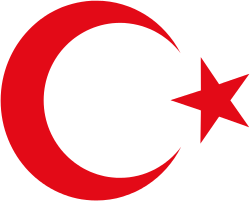 The Emblem of Turkey, as used on Turkish passports,[1] ID cards[2] and visas[3] 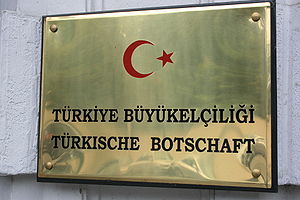 The Emblem of Turkey, seen at the Turkish diplomatic mission in Vienna

The Emblem of Turkey is the star and crescent, which also appears on the Flag of Turkey. Like National emblem of France and a number of other countries, the Turkey's emblem does not have any legal status as an official coat of arms. It appears on the cover of Turkish passports, on Turkish identity cards and diplomatic missions of Turkey.

The current emblem of Turkey has been in use, with some minor changes, since 1922, when Ottoman Sultanate was abolished and its coat of arms was abandoned.

Since there is no law regarding the emblem, the colors of star and crescent are sometimes rendered differently in different uses. In the emblem used in old national IDs in 1930's, the direction of the crescent was also different, facing left instead of right. 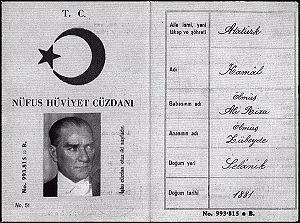 The emblem of Turkey in old national IDs

In 2014, MPs of AKP in TBMM attempted to pass a motion in order to officially create a new coat of arms for the country.[4][5]

A circular section of the red Flag of Turkey containing the white star and crescent is used in the current emblems of a number of Turkish ministries and governmental institutions, in the emblem of the Grand National Assembly, and as the flag badge on the uniforms of Turkish national sports teams and athletes. It was also used on the old (non-digital) Turkish identity cards.[6]

Coat of arms of the Ministry of Foreign Affairs

The Turkish Ministry of Foreign Affairs often uses a red oval-shaped escutcheon, whose color is that of the Turkish flag and the shape echoes the oval shield at the center of the late 19th-century Ottoman coat of arms.[7] The escutcheon contains a gold-tone star and crescent which are vertically oriented (with the star on top) and surrounded by the gold-tone text T.C. Dışişleri Bakanlığı.[8] A variant of this oval escutcheon (containing the gold-tone text Türkiye Cumhuriyeti Büyükelçiliği) is used by the Turkish embassies.[9][10]

The seal of the President of Turkey has a large 16-pointed star in the center, which is surrounded by 16 five-pointed stars, symbolizing "the 16 great Turkic states in history."[11] Its appearance is regulated by law.

In 1925, the Ministry of National Education held a contest for a national emblem. Namık İsmail, a painter, won the contest with his coat of arms depicting Asena, a mythological female wolf in the founding myth of the Ashina clan which ruled the Göktürk Empire. However, this coat of arms was never used.