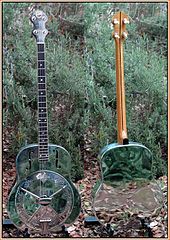 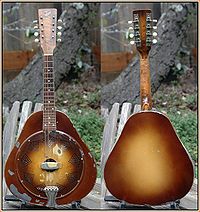 The company was formed by John Dopyera, the luthier who invented the resonator, and George Beauchamp, a steel guitar player who had suggested to Dopyera the need for a guitar loud enough to play a melody over brass and other wind instruments.[3]

In 1927, National produced the first resonator instruments and sold under their National brand. They had metal bodies and a tricone resonator system, with three aluminium cones joined by a T-shaped aluminium spider. Wooden-bodied models soon followed, based on inexpensive plywood student guitar bodies supplied by Kay, Harmony, and other established instrument manufacturers.[3]

In 1928, Dopyera left National, and with four of his brothers formed the Dobro Manufacturing Company to produce a competing single resonator design, with the resonator cone inverted. John Dopyera continued to hold stock in National. The Dobro design was both cheaper to produce and louder than the tricone.[3]

National soon introduced their own single resonator design, the biscuit, which Dopyera claimed to have designed before leaving, though the patent was registered by Beauchamp. National also continued to produce tricone designs, which some players preferred.

In 1932, the Dopyera brothers secured a controlling interest in both National and Dobro, and merged the companies to form the National Dobro Corporation.

In 1989 a new company in California named National Reso-Phonic Guitars[5] began manufacturing reproductions of resonator instruments based on designs originated by John Dopyera.

The National brand and trademark are particularly associated with two of the three basic resonator designs:

Terms such as National or National pattern are often used to distinguish these patterns from the Dobro design.

170px
175px
Son House and Peetie Wheatstraw were some of the musicians using National resonator guitars.

Some of the artists that used National guitars were:[2]