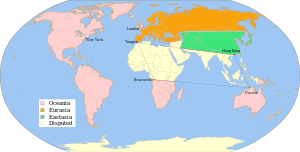 Oceania is coloured in pink, Eurasia is orange and Eastasia is green on the fictitious 1984 world map; the "disputed area" rests roughly between the dotted lines

The history of how the world evolved into these three states is vague. They appear to have emerged from nuclear warfare and civil dissolution over 20 years between 1945 (the end of the Second World War) and 1965. Eurasia was likely formed first, followed closely afterwards by Oceania, with Eastasia emerging a decade later, possibly in the 1960s.

Oceania is the superstate where protagonist Winston Smith dwells. It is believed to be composed of the Americas, the British Isles (called "Airstrip One" in the novel), Iceland, Australia, New Zealand, and southern Africa below the River Congo. It also controls—to different degrees and at various times during the course of its eternal war with either Eurasia or Eastasia—the polar regions, India, Indonesia and the islands of the Pacific. Oceania lacks a single capital city, although London and apparently New York City, may be regional capitals. In the novel, Emmanuel Goldstein, Oceania's declared Public Enemy Number One, describes it in the fictional book The Theory and Practice of Oligarchical Collectivism as a result of the United States having absorbed the British Empire. Goldstein's book also states that Oceania's primary natural defense is the sea surrounding it.

The ruling doctrine of Oceania is Ingsoc, the Newspeak euphemism for English Socialism. Its nominal leader is Big Brother, believed by the masses to have been the leader of the revolution and still used as an icon by the party. The personality cult is maintained through Big Brother's function as a focal point for love, fear, and reverence, more easily felt towards an individual than towards an organization.

The unofficial language of Oceania is English (officially called Oldspeak), and the official language is Newspeak. The restructuring of the language is intended to eliminate unorthodox political and social thought, by eliminating the words needed to express it.

The society of Oceania is sharply stratified into three groups: the small ruling Inner Party, the more numerous and highly indoctrinated Outer Party, and the large body of politically meaningless Proles. Except for certain rare exceptions like Hate Week, the proles remain essentially outside Oceania's political control and are placated by trivial sports and other entertainment; the Thought Police easily manage any Prole socially aware enough to be a problem.

Oceania's national anthem is Oceania, Tis For Thee which, in one of the three film versions of the book, takes the form of a crescendo of organ music along with operatic lyrics. The lyrics are sung in English, and the song is reminiscent of God Save the Queen and My Country 'Tis of Thee.

Even the names of countries, and their shapes on the map, had been different. Airstrip One, for instance, had not been so called in those days: it had been called England, or Britain, though London, he felt fairly certain, had always been called London.[1]

Like Europe as a whole, Britain was hit by atomic weapons in the conflicts before the revolutions in Oceania and then elsewhere. One British town, Colchester, is referenced specifically as having been destroyed; flashbacks to Smith's childhood also include scenes of Londoners taking refuge in the city's underground transit tunnels in the midst of the bombing.

It is stated that Eurasia was formed when the Soviet Union annexed the rest of continental Europe, creating a single polity stretching from Portugal to the Bering Strait. Orwell frequently describes the face of the standard Eurasian as "mongolic" in the novel. The only soldiers other than Oceanians that appear in the novel are the Eurasians. When a large number of captured soldiers are executed in Victory Square, some Slavs are mentioned, but the stereotype of the Eurasian maintained by the Party is Mongoloid, like O'Brien's servant, Martin. This implies that the Party uses racism to avert sympathy toward an enemy.

According to Goldstein's book, Eurasia's main natural defense is its vast territorial extent, while the ruling ideology of Eurasia is identified as "Neo-Bolshevism", a variation of the Oceanian "Ingsoc".

Eastasia's borders are not as clearly defined as those of the other two superstates, but it is known that they encompass most of modern-day China, Japan, Taiwan and Korea. Eastasia repeatedly captures and loses Indonesia, New Guinea, and the various Pacific archipelagos. Its political ideology is, according to the novel, "called by a Chinese name usually translated as Death-worship, but perhaps better rendered as 'Obliteration of the Self'". Orwell does not appear to have based this on any existing Chinese word or phrase.[2]

Not much information about Eastasia is given in the book. It is known that it is the newest and smallest of the three superstates. According to Goldstein's book, it emerged a decade after the establishment of the other two superstates, placing it somewhere in the 1960s, after years of "confused fighting" among its predecessor nations. (At the time of writing, the victory of Mao Zedong's Communists in the Chinese Civil War was not yet taken as a foregone conclusion. The Korean War had also not yet occurred, but Korea was already being administered by two competing governments. Japan was still under military occupation and, at least until shortly before Orwell completed the book, by several different powers. Power in the real life nations that make up the fictional Eastasia was, therefore, very much in flux.) It is also said in the book that the industriousness and fecundity of the people of Eastasia allows them to overcome their territorial inadequacy in comparison to the other two powers. At the time Orwell wrote the book, East Asians, including the Japanese, all had birth rates higher than those of Europeans.[citation needed]

The "disputed area", which lies "between the frontiers of the super-states", is "a rough quadrilateral with its corners at Tangier, Brazzaville, Darwin, and Hong Kong"[3] This area is fought over during the perpetual war among the three great powers, with one power sometimes exerting control over vast swathes of the disputed territory, only to lose it again. The reason three super-countries seek to control this area is to harness the large population and vast resources within the region. Control of the islands in the Pacific and the polar regions is also constantly shifting, though none of the three superpowers ever gains a lasting hold on these regions. The inhabitants of the area, having no allegiance to any nation, live in constant slavery under whichever power controls them at that time.

Eastasia and Eurasia fight over "a large but fluctuating portion of Manchuria, Mongolia, and Tibet".

At one point during the novel, Julia procures tea to share with Winston, and remarks that she thinks Oceania recently captured India (or perhaps parts of India) but such "control" is usually transient.

The world of Nineteen Eighty-Four exists in a state of perpetual war among the three major powers. At any given time, two of the three states are aligned against the third; for example Oceania and Eurasia against Eastasia or Eurasia and Eastasia against Oceania. However, as Goldstein's book points out, each Superstate is so powerful that even an alliance of the other two cannot destroy it, resulting in a continuing stalemate. From time to time, one of the states betrays its ally and sides with its former enemy. In Oceania, when this occurs, the Ministry of Truth rewrites history to make it appear that the current state of affairs is the way it has always been, and documents with contradictory information are destroyed in the memory hole.

Goldstein's book states that the war is not a war in the traditional sense, but simply exists to use up resources and keep the population in line. Victory for any side is not attainable or even desirable, but the Inner Party, through an act of doublethink, believes that such victory is in fact possible. Although the war began with the limited use of atomic weapons in a limited atomic war in the 1950s, none of the combatants use them any longer for fear of upsetting the balance of power. Relatively few technological advances have been made (the only two mentioned are the replacement of bombers with "rocket bombs" and of traditional capital ships with the immense "floating fortresses").

Almost all of the information about the world beyond London is given to the reader through government or Party sources, which by the very premise of the novel are unreliable. Specifically, in one page Julia brings up the idea that the war is fictional and that the rocket bombs falling from time to time on London are fired by the government of Oceania itself, in order to maintain the war atmosphere among the population (better known as a false flag operation). The protagonists have no means of proving or disproving this theory. However, during preparations for Hate Week, rocket bombs fell at an increasing rate, hitting places such as playgrounds and crowded theatres, causing mass casualties and increased hysteria and hatred for the party's enemies. War is also a convenient pretext for maintaining a huge military–industrial complex in which the state is committed to developing and acquiring large and expensive weapons systems which almost immediately become obsolete and require replacement. Finally, according to Goldstein's book, war makes handing over power to a small caste easier, and gives pretext to do so.

Because of this ambiguity, it is entirely possible that the geopolitical situation described in Goldstein's book is entirely fictitious; perhaps The Party controls the whole world, or possibly its power is limited to just Great Britain as a lone and desperate rogue nation using fanaticism and hatred of the outside world to compensate for political impotence. It's also possible that a genuine and large-scale resistance movement exists, or that Oceania is indeed under a large-scale attack by outside forces.