The Nativity Fast is a period of abstinence and penance practiced by the Eastern Orthodox, Oriental Orthodox, and Eastern Catholic Churches, in preparation for the Nativity of Christ, (December 25).[1] The corresponding Western season of preparation for Christmas, which also has been called the Nativity Fast[2] and St. Martin's Lent, has taken the name of Advent. The Eastern fast runs for 40 days instead of four (Roman rite) or six weeks (Ambrosian rite) and thematically focuses on proclamation and glorification of the Incarnation of God, whereas the Western Advent focuses on the two comings (or advents) of Jesus Christ: his birth and his Second Coming or Parousia.

Sometimes the fast is called Philip's Fast (or the Philippian Fast), as it traditionally begins on the day following the Feast of St. Philip the Apostle (November 14). Some churches, such as the Melkite Greek Catholic Church, have abbreviated the fast to start on December 10, following the Feast of the Conception by Saint Anne of the Most Holy Theotokos.

The purpose of fasting

Through the discipline of fasting, practiced with humility and repentance, it is believed that by learning to temper the body's primary desire for food, that other worldly desires can be more easily tempered as well. Through this practice one is better enabled to draw closer to God in the hope of becoming more Christ-like. While the fast influences the body, it is important to note that emphasis is placed on the spiritual facet of the fast rather than mere physical deprivation. Orthodox theology sees a synthesis between the body and the soul, so what happens to one affects the other. The church teaches that it is not enough to fast from food; one must also fast from anger, greed and covetousness. In addition to fasting, almsgiving is also emphasized.[3] 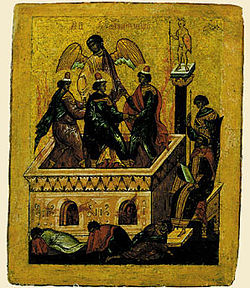 The Three Young Men in the Fiery Furnace, celebrated during the Nativity Fast as a reminder of the grace acquired through fasting (15th century icon of the Novgorod school).

In the Eastern Orthodox Church, the fast traditionally entails fasting from red meat, poultry, meat products, eggs, dairy products, fish, oil, and wine. Fish, wine and oil are allowed on Saturdays and Sundays, and oil and wine are allowed on Tuesdays and Thursdays. Except Ethiopian Orthodox tewahedo Church.

As is always the case with Orthodox fasting rules, persons who are ill, the very young or elderly, and nursing mothers are exempt from fasting. Each individual is expected to confer with their confessor regarding any exemptions from the fasting rules, but should never place themselves in physical danger.

There has been some ambiguity about the restriction of fish, whether it means the allowance of invertebrate fish or all fish. Often, even on days when fish is not allowed, shellfish may be consumed. More detailed guidelines vary by jurisdiction, but the rules strictly state that from the December 20 to December 24 (inclusively), no fish may be eaten.

The Eve of Nativity (December 24) is a strict fast day, called Paramony (lit. "preparation"), on which no solid food should be eaten until the first star is seen in the evening sky (or at the very least, until after the Vesperal Divine Liturgy that day). If Paramony falls on a Saturday or Sunday, the day is not observed as a strict fast, but a meal with wine and oil is allowed after the Divine Liturgy, which would be celebrated in the morning.

The Entry of the Theotokos into the Temple, the Great Feast which falls during the course of the Nativity Fast (16th-century Russian icon).

In some places, the services on weekdays during the fast are similar to the services during Great Lent (with some variations). Many churches and monasteries in the Russian tradition will perform the Lenten services on at least the first day of the Nativity Fast. Often the hangings in the church will be changed to a somber, Lenten colour.

During the course of the fast, a number of feast days celebrate those Old Testament prophets who prophesied the Incarnation; for instance: Obadiah (November 19), Nahum (December 1), Habbakuk (December 2), Zephaniah (December 3), Haggai (December 16), Daniel and the Three Holy Youths (December 17). These last are significant not only because of their perseverance in fasting, but also because their preservation unharmed in the midst of the fiery furnace is interpreted as being symbolic of the Incarnation—the Virgin Mary conceived God the Word in her womb without being consumed by the fire of the Godhead.

As is true of three of the four Orthodox fasts (The Apostles' Fast is the exception), a Great Feast falls during the course of the fast; in this case, the Entry of the Theotokos (November 21). After the apodosis (leave-taking) of that feast, hymns of the Nativity are chanted on Sundays and higher-ranking feast days.

The liturgical Forefeast of the Nativity begins on December 20, and concludes with the Paramony on December 24. During this time hymns of the Nativity are chanted every day. In the Russian usage, the hangings in the church are changed to the festive color (usually white) at the beginning of the Forefeast.

Sunday of the Forefathers

Two Sundays before Nativity, the Church calls to remembrance the ancestors of the church, both before the giving of the Law of Moses and after.[4] The Menaion contains a full set of hymns for this day which are chanted in conjunction with the regular Sunday hymns from the Octoechos. These hymns commemorate various biblical persons, as well as the prophet Daniel and the Three Young Men. There are also a special Epistle (Colossians 3:4-11) and Gospel (Luke 14:16-24) readings appointed for the Divine Liturgy on this day.

Sunday of the Holy Fathers

The Sunday before Nativity is even broader in its scope of commemoration than the previous Sunday, in that it commemorates all of the righteous men and women who pleased God from the creation of the world up to Saint Joseph.[4] The Menaion provides an even fuller service for this day than the previous Sunday. At the Vespers portion of the All-Night Vigil three Old Testament "parables" (paroemia) are read: Genesis 14:14-20, Deuteronomy 1:8-17 and Deuteronomy 10:14-21. The Epistle which is read at the Divine Liturgy is a selection from Hebrews 11:9-40; the Gospel is the Genealogy of Christ from the Gospel of Matthew (1:1-25)

Christmas Eve is traditionally called Paramony (Greek: παραμονή, Slavonic: navechérie). Paramony is observed as a strict fast day, on which those faithful who are physically able to, refrain from food until the first star is observed in the evening, when a meal with wine and oil may be taken. On this day the Royal Hours are celebrated in the morning. Some of the hymns are similar to those of Theophany (Epiphany) and Great and Holy Friday, thus tying the symbolism of Christ's Nativity to his death on the Cross. The Royal Hours are followed by the Vesperal Divine Liturgy of St. Basil which combines Vespers with the Divine Liturgy.

During the Vespers, eight Old Testament lections ("parables") which prefigure or prophesy the Incarnation of Christ are read, and special antiphons are chanted. If the Feast of the Nativity falls on a Sunday or Monday, the Royal Hours are chanted on the previous Friday, and on the Paramony the Vesperal Divine Liturgy of St. John Chrysostom is celebrated in the morning, with its readings and antiphons, and the fasting is lessened to some degree—a meal with wine and oil being served after the Liturgy.

The All-Night Vigil on the night of December 24 consists of Great Compline, Matins and the First Hour. One of the highlights of Great Compline is the exultant chanting of "God is with us!" interspersed between selected verses from the prophesy of Isaiah 8:9-18, foretelling the triumph of the Kingdom of God, and 9:2-7, foretelling the birth of the Messiah ("For unto us a child is born...and he shall be called...the Mighty God....").

The Orthodox do not normally serve a Midnight Mass on Christmas Eve; rather, the Divine Liturgy for the Nativity of Christ is celebrated the next morning. However, in those monasteries which continue to celebrate the All-Night Vigil in its long form—where it literally lasts throughout the night—the conclusion of the Vigil at dawn on Christmas morning will often lead directly into the celebration of the Divine Liturgy. When the Vigil is separate from the Divine Liturgy, the Lenten fast continues even after the Vigil, until the end of the Liturgy the next morning.

Fasting during the afterfeast

On December 25, the Afterfeast of the Nativity of Christ begins. From that day to January 4 (the day before Theophany Eve) is a fast-free Period. The Eve of the Theophany (January 5) is another strict fast day (paramony).

Main article: Fasting and Abstinence of the Coptic Orthodox Church of Alexandria

In the Coptic Orthodox Church, an additional fast is observed on the three days before the beginning of the Nativity Fast, to commemorate the miraculous moving of the mountain of Mukattam (which lies within a suburb of Cairo) at the hands of Saint Simon the Tanner in the year 975, during the rule of the Muslim Fatimid Caliph Al-Muizz Li-Deenillah.