The Natural Law Party (NLP) is a United States political party affiliated with the international Natural Law Party. It was founded in 1992 and was dissolved in many areas beginning in 2004. It is still active in Michigan.

The U.S. version of the Natural Law Party ran John Hagelin as its presidential candidate in 1992, 1996, and 2000. The party also ran congressional and local candidates. It attempted to merge with the Reform Party in 2000. Several state affiliates have kept their ballot positions and have allied with other small parties.

"Natural Law" referred to "the ultimate source of order and harmony displayed throughout creation."[1] Harmony with Natural Law could be accomplished by the practice of Transcendental Meditation and more advanced techniques.[1] Because of scientific studies of these techniques, it considered this to be a science-based approach.[2]

The NLP proposed that a government subsidized group of 7,000[3] advanced meditators known as Yogic Flyers would lower nationwide stress, reduce unemployment,[4] raise the gross national product,[4] improve health, reduce crime,[1] and make the country invincible to foreign attack.[5] Hagelin called it a "practical, field-tested, scientifically proven" solution.[6] TM would be taught to the military, to students, in prisons, and to ordinary citizens.[1]

Hagelin predicted that implementation of the program would result in $1 trillion in savings from reduced costs for medical care, criminal prosecutions and prisons, national defense, and other government expenses.[5] It recommended adoption of The Grace Commission reforms.[7] The party supported a flat tax.[8]

Civil right planks included equal rights for women and gays, replacing bans on abortion with prevention programs, and a national referendum on capital punishment.[5] It opposed the legalization of drugs.[10] In 1992, it suggested the appointment of former Secretary of State George Schultz as drug czar.[10]

Slogans included: "Only a new seed will yield a new crop",[3] and "bring the light of science into politics".[9] Catchphrases included: "prevention-oriented solutions" and "conflict-free politics".[11]

Bevan Morris, president of Maharishi University of Management (then called "Maharishi International University"), was the founding chairman of the party, which was founded April 22, 1992, in Fairfield, Iowa.[12]

The party said it had no direct connection to Maharishi Mahesh Yogi or to TM. Hagelin said, "It's not a transcendental meditation party",[9] and denied any connection between the Maharishi University of Management and his campaign.[13] Tompkins said that more than half of its founders were connected to the TM movement.[7] One critic said that it was "just another front group for the TM movement".[13] By one report, almost all of the 92 candidates who ran on the NLP slate in California in 1996 were TM practitioners.[14]

The Natural Law Party had to qualify separately in each state to nominate a presidential candidate. It used 300 signature gatherers, both paid and volunteer, in California alone.[3] The party submitted 5,724 signatures in Iowa, as the party announced at a press conference attended by Mike Love, a member of The Beach Boys and a TM supporter.[15] Nevada required 9,392 signatures.[16] The NLP joined the another small party in suing the state over their early deadline, and they succeeded in getting a court to order a second chance to qualify.[16] The NLP qualified after submitting 11,000 valid signatures.[17] The party submitted the required 250,000 signatures in California too late to qualify for the ballot there.[18] By the time of the election, Hagelin was on the ballot in 31 states plus the District of Columbia.[19]

It was certified as a national party by the Federal Election Commission (FEC) in September 1992, making it eligible for federal campaign funds.[20] 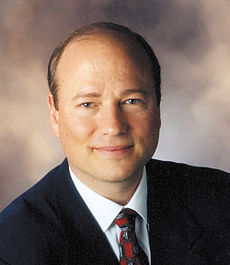 John Hagelin, a 37-year-old physics professor at Maharishi University of Management (MUM), was the NLP candidate for president of the United States in the 1992. He said that he had been uninterested in politics and a Republican by "default" before the campaign.[21] Mike Tompkins, also on the MUM staff, was his running mate.[3][22] They were formally chosen at the party's 400-person convention in Washington D.C. on October 5, 1992, although they had been campaigning already.[18][23] Both of them took six-month leaves of absence from the university to campaign.[13]

Hagelin proposed that all candidates should have their brain waves recorded by EEG and the resulting "mental profiles" should be publicly disclosed, so that the voters could see which candidates had the best "brain-wave stability".[4] He said that the test would "allow us to avoid the possibility of a brain-dead candidate".[24] The proposal was dropped because of a poor reception.[9]

Hagelin was excluded from the presidential debates and he asked the FEC to take over the process.[25] He did participate in the Alternative Candidates' National Debate along with the candidates or representatives of three other parties.[25] Hagelin's campaign cost several million dollars.[26]

The NLP had nine candidates for U.S. Congress in California.[24] The sole congressional candidate in Massachusetts was a movement employee.[27] Two people tried to get on the ballot for congress in Missouri, but only one succeeded in getting enough petition signatures.[28] The party said it had 100 candidates running in state and local offices.[9] The NLP ran a candidate in Illinois for Senate.[29] There were reported to be between 80 and 175 candidates on the NLP slate.[23][30]

The Beach Boys raised funds for the NLP during a summer concert tour.[9] Mike Love said he was switching his support from George H. W. Bush to Hagelin.[31]

In addition to its own slate, the NLP also endorsed candidates in other races, including Republicans and New Alliance Party members.[7]

The NLP ran slates of candidates in the 1994 mid-term election. Four candidates ran in Nevada.[32] It hired professional petition gatherers to try to qualify 12 candidates for the ballot in Missouri.[33]

Hagelin came in third in a non-binding straw poll held in Fayette, Missouri, after visiting there twice. He received 20% of the 352 votes cast, ahead of Bob Dole and Ross Perot.[39] The party published a 172-page platform booklet, the longest of any party.[40]

Hagelin said that the party had been treated as a political curiosity in 1992, but had become a political force by 1995.[35] The party was the subject of jokes on late-night TV shows,[41] and its leaders admitted that some voters rejected the party because of the Maharishi's teachings.[35]

In 1996, the NLP called itself the "fastest-growing grassroots party with 700 candidates on the ballot in 48 states".[8] It ran 92 candidates for local, state, and federal offices in California alone.[42] There were about 50 on the ballot in Ohio.[2]

Hagelin threatened to sue the organizers of the National Issues Convention, a forum on social issues held in January 1996, if he was not allowed to participate along with the Republican and Democratic candidates.[43] He continued to have trouble attracting attention from the media. At the Utah press conference announcing that the NLP had qualified for the ballot, only a single reporter attended.[11] NLP candidates, including Hagelin, said they did not expect to win but were using the campaigns to spread their message.[2]

During the 1996 election, the party ran hundreds of candidates for seats in the United States House of Representatives, against both Democratic and Republican incumbents. The successful candidates were mostly in California, where many of them received about 3% of the vote, and Ohio, where some candidates received 4% or 5% of the vote. The candidate running against Democrat James Traficant, a conservative Democrat with no Republican opposition that year, received 9%. In South Carolina, the party received 10% of the vote against Republican Floyd Spence who had no other opposition.

In California, psychiatrist Harold H. Bloomfield ran as candidate for Governor in 1998.[44]

On March 31, 2000 the FEC certified primary season matching funds for John Hagelin, who was seeking the nomination of the Natural Law and Reform Parties. Hagelin was the second minor party presidential candidate to qualify; the first was Pat Buchanan. Ralph Nader eventually qualified as well. According to the Federal Election Commission (FEC), the NLP spent $2.3 million on its presidential campaign in the 1999–2000 election cycle.[45]

Following Hagelin's and the Natural Law Party's failed attempt at a coalition with the Reform Party in 2000, the Natural Law Party ran its own ticket of Hagelin and Nat Goldhaber. The pair appeared on 38 ballots and received 83,702 votes or 0.1% of the total. This poor finish led Maharishi Mahesh Yogi to stop endorsing the Party and very few members renewed their membership in 2001. By 2003, the Natural Law Party had so weakened that it endorsed Dennis Kucinich, a Democrat, for President, rather than try to achieve ballot status for a candidate of its own, having lost all but 10 ballot lines.[47]

Between 2000 and 2004, the Natural Law Party sought to create an independent coalition of voters interested in election law reform. In 2002, the party endorsed Independence Party of Minnesota candidate for Minnesota Governor, Tim Penny.

Entities using the name are still active in some states. The South Carolina branch of the party was taken over by the South Carolina Green Party. However, several candidates were on the ballot in 2004 under the Natural Law Party banner, including Socialist Party Presidential Candidate Walt Brown. In 2006 the Idaho Natural Law Party merged with the new United Party, with the United Party taking over the ballot line via a name change. Only the Michigan and Mississippi Natural Law parties remained as ballot-qualified parties.[49]

The Mississippi Natural Law Party nominated the Socialist Party presidential ticket of Brian Moore and Stewart Alexander, though they were ultimately barred from appearing on the Mississippi ballot because of a legal controversy surrounding the deadline hour for filing their presidential electors.[52]

The NLP in the United States was largely disbanded in 2004. However some state affiliates, such as Michigan, have kept their ballot positions and have allied with other small parties.[49]

Many party activists have shifted their attention to a new political arm of the Transcendental Meditation movement, the United States Peace Government.[citation needed]

As of 2012 the Natural Law Party was still active in Michigan, led by attorney, Doug Dern. According to Dern, who ran twice as a Natural Law candidate for U.S. Senate and once for the Hartland Township Board of Trustees, the party appeared on the 2012 presidential ballot ticket [53] In August 2012, the party nominated former Salt Lake City Mayor Rocky Anderson for president.[54]