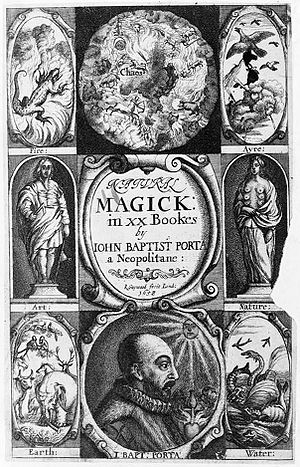 Frontispiece of an English translation of Natural Magick published in London in 1658.

Magia Naturalis (in English, Natural Magic) is a work of popular science by Giambattista della Porta first published in Naples in 1558. Its popularity ensured it was republished in five Latin editions within ten years, with translations into Italian (1560), French, (1565) Dutch (1566) and English (1658) printed.

Natural Magic was revised and considerably expanded throughout the author's lifetime; its twenty books (Naples 1589) include observations upon geology, optics, medicines, poisons, cooking, metallurgy and magnetism as well as cosmetics, perfumes, gunpowder and invisible writing.

Natural Magic is a fine example of pre-Baconian science. Its sources include the ancient world learning of Pliny the Elder and Theophrastus as well as numerous scientific observations made by Della Porta. Natural Magic was translated and published in English in 1658.