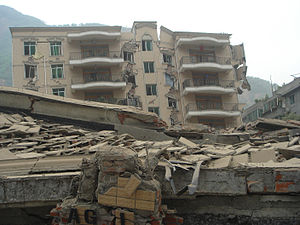 In ancient beliefs, natural disasters were seen as Heaven's response to immoral human behaviour, whereby the conduct of different individuals carried different weights. While the behaviour of common people ranked last, the actions of bureaucrats had a greater effect.[1] Given that in Imperial China the emperor's behaviour was believed to be the most important, popular belief was that the emperor should attempt to prevent disasters by ensuring his conduct was in following with moral codes – and if a disaster should occur, he was responsible for addressing the consequences. According to the Overseas Development Institute, the state-led nature of humanitarian aid in today's China traces back to these traditional beliefs.[2] Chinese believed that natural disasters would foretell the end of a dynasty or the death of a great leader.

This concept of cosmic linkage between natural disasters and human conduct was radically rejected at the height of Maoist years when nature was represented as ‘an enemy to be overcome, an adversary to be brought to heel’. Propaganda posters were produced with the slogan, "Earthquakes cannot frighten us, the people will certainly conquer nature."[3]

The National Disaster Reduction Center (NDRC) of the Ministry of Civil Affairs (MCA) is a specialized agency under the Chinese Government engaged in information services and supporting decisions on various natural disasters. It provides reference for disaster-management departments in their decision-making and technical support for China's disaster-reduction undertakings by way of collecting and analyzing disaster information, assessing disasters and emergency relief, and analyzing and studying disasters using such advanced technology as satellite remote sensing.