A naval air station for Corpus Christi had been proposed since the mid-1930s, and the city's congressman, Richard M. Kleberg, supported it. But it remained a low priority construction project for the U.S. Navy as late as January 9, 1940. (The Kleberg family and Roy Miller both supported Vice President John Nance Garner's quest for the 1940 presidential nomination.) Rep. Lyndon B. Johnson made himself a key Texas ally of President Franklin D. Roosevelt's bid for a third term, and the White House told the Navy Department to consult Johnson, and heed his advice, on Navy contracts in Texas. By February 1940, the project was on the Navy's preferred list. Brown & Root, a Houston firm, shared the construction contract with another New Deal supporter, Henry Kaiser; the president personally signed the (first) cost plus fixed fee contract June 13, 1940. The Roosevelt campaign in Texas no longer had a shortage of cash.[1]

The official step leading to the construction of the Naval Air Station was initiated by the 75th United States Congress in 1938. A board found that a lack of training facilities capable of meeting an emergency demand for pilots constituted a grave situation. They recommended the establishment of a second air training station, and further, that it be located on Corpus Christi Bay. NAS Corpus Christi was commissioned by its first Commanding Officer, CAPT Alva Berhard, on March 12, 1941. The first flight training started on May 5, 1941. 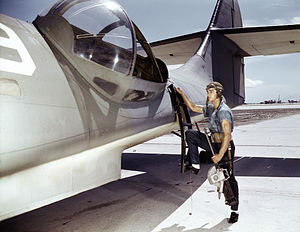 In 1941, 800 instructors provided training for more than 300 student pilots a month. The training rate nearly doubled after the bombing of Pearl Harbor. By the end of World War II, more than 35,000 naval aviators had earned their wings here. Corpus Christi provided intermediate flight training in World War II, training naval pilots to fly SNJ, SNV, SNB, OS2U, PBY, and N3N type airplanes. In 1944 it was the largest naval aviation training facility in the world. The facility covered 20,000 acres (81 km2), and had 997 hangars, shops, barracks, warehouses and other buildings. The Corpus Christi training facility consisted of the main location and six auxiliary air stations at Rodd, Cabaniss, Cuddihy, Kingsville, Waldron and Chase fields.

Former President George H.W. Bush was in the third graduating class, June 1943, and the youngest pilot ever to graduate. NAS Corpus Christi also was home to the Blue Angels from 1951-1954. It also served as a Project Mercury Tracking station in the early 1960s. 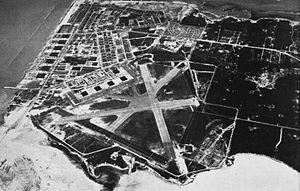 Other aircraft found at NAS Corpus Christi include the UH-1N Huey, a helicopter used primarily for search and rescue, as well as P-3 Orions and RQ-1 Predators.

In addition to Navy students, VT-31 and 35 train pilots from the Air Force, Coast Guard, and Marines. However, due to policy changes, Air Force students will no longer be training at the base and the last USAF graduates should complete training in mid-2012. The station employs officer, enlisted and civilian personnel serving in the U.S. Navy, U.S. Marine Corps, U.S. Air Force, U.S. Coast Guard, U.S. Army, U.S. Customs and Border Protection and the military services of numerous NATO/Allied/Coalition partner nations.

NAS Corpus Christi is also home to the Corpus Christi Army Depot (CCAD), the largest helicopter repair facility in the world (and an unusual arrangement of an Army installation located on a Naval facility). The commanding officer is currently COL Garner Pogue. The Army is considering moving its helicopter squadron from Honduras to this air station to save money, using facilities recently abandoned when large Navy minesweeping helicopters moved elsewhere.[citation needed]

Facilities also located on the installation