The U.S. Navy's presence in Key West dates back to 1823 when a Naval Base was established to stop piracy in this area. The lower Keys were home to many wealthy shipping merchants whose fleets operated from these waters. This drew the interest of pirates such as Blackbeard and Captain William Kidd, who used the Florida Keys as a base from which to prey on shipping lanes. The base was expanded during the Mexican–American War, with the construction of Fort Zachary Taylor and other fortifications in the Key West area commencing in 1845 and continuing through to its completion in 1866. The base also figured prominently during the Spanish–American War. In 1898, the battleship Maine sailed from Key West to Havana, Cuba, where it later exploded while at anchor and sank. The sinking of the Maine resulted in the United States declaring war on Spain, and the entire U.S. Atlantic Fleet moved to Key West for the duration of the war.

During World War I (1914–1918) the base was expanded again, and in 1917, a U.S. naval submarine base was established on what is now naval air station property. Its mission during World War I was to supply oil to the U.S. fleet and to block German ships from reaching Mexican oil supplies.

The nation's southernmost Naval Base proved to be an ideal year-round training facility with rapid access to the open sea lanes and ideal flying conditions for Naval Aviation. The Navy's forces were expanded to include seaplanes, submarines and blimps. Ground was broken for construction of a small coastal air patrol station on 13 July 1917 at what is now Trumbo Point on land leased from the Florida East Coast Railroad Company. The project involved dredging, erection of station buildings, three seaplane ramps, a dirigible hangar, a hydrogenerator plant, and temporary barracks.

On 22 September of that year, the base's log book recorded the first naval flight ever made from Key West – a Curtiss N-9 seaplane flown by U.S. Coast Guard Lieutenant Stanley Parker. About three months later, on 18 December, Naval Air Base Key West was commissioned and LT Parker became the first Commanding Officer.

Naval Air Base Key West pilots flew in search of German submarines resting on the surface to recharge batteries. The aircraft was armed only with a single machine gun, but gunners were supplied with hand grenades. The slow Curtiss biplanes flew low over surfaced subs, and gunners dropped grenades into open conning towers. Naval aviation antisubmarine warfare was beginning to prove itself in combat.

On 18 January 1918, the first class of student aviators arrived for seaplane training, which launched the station's reputation as a premier training site for Naval Aviators, a reputation which continues today. The base was primarily used for antisubmarine patrol operations and as an elemental flight training station, with more than 500 aviators trained at the station during World War I.

After World War I, the base was decommissioned and its personnel were transferred or released. Most of the buildings were destroyed or dismantled and moved to other locations. The remaining facilities were used only occasionally during 1920–1930 for seaplane training. The station remained inactive until 1939.

The seaplane base was designated as a Naval Air Station Key West on 15 December 1940 and served as an operating and training base for fleet aircraft squadrons, to include seaplane, land-based aircraft, carrier-based aircraft and lighter-than-air blimp squadrons. This set the stage for America's entry into World War II. Fortunately, the government had retained the property during the interwar period of the 1920s and 1930s, which proved to be a wise decision as the nation scrambled to re-arm in a state of emergency at the outbreak of the war.

Naval Base Key West was reopened just prior to the United States' entry into World War II to support Navy destroyers, submarines, patrol craft and PBY flying boat and amphibious aircraft. Other satellite facilities were established to support other war efforts, including Meachum Field for lighter-than-air blimp operations on Key West, and runways for land-based and carrier-based aircraft on Boca Chica Key.

By 1943, German submarines were operating so near Key West that they were sinking allied ships within sight of land. Submarine raids peaked in May of that year, when 49 ships were torpedoed off the coast of Florida. As the war continued, German submarines were progressively attrited by U.S. Navy and Allied antisubmarine warfare forces and German torpedo raids by U-boats decreased. In March 1945, the satellite airfields, some previously known as Naval Auxiliary Air Facility Boca Chica and Naval Auxiliary Air Station Boca Chica were disestablished and combined into a single aviation activity designated as U.S. Naval Air Station, Key West. 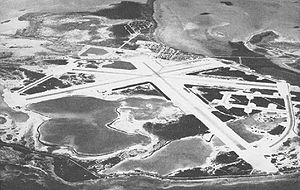 Aerial view of NAS Key West in the 1940s

After World War II ended, NAS Key West was retained as a training facility. On 1 June 1962, the Navy AN/FPS-37 Radar site was added to the United States Air Force's Air Defense Command SAGE network feeding data to DC-09 at Gunter AFB, Alabama. The USAF 671st Radar Squadron was activated and NAS Key West was designated as NORAD ID "Z-209". During the Cuban Missile Crisis, the United States Army activated Nike Hercules anti-aircraft surface-to-air missiles in the Homestead and Miami area and Hawk air defense missiles in and around Key West,[5] using the radar facilities. It designated the site as AADCP site KW-18DC under the Homestead-Miami Defense Area. The Cudjoe Key AFS site was also added to the SAGE network at that time (Z-399), being operated by contractors.

NAS Key West was to become a focal point during the 1962 Cuban Missile Crisis, which posed the first doorstep threat to America in more than a century. Reconnaissance and operational flights were begun 22 October 1962, in support of the blockade around Cuba. During the Missile Crisis, Key West cemented its claim to the title "Gibraltar of the Gulf", coined a hundred years earlier by Commodore David Porter.

By 1964, the USAF added an AN/FPS-6A height-finder radar at NAS Key West, which was modified to an AN/FPS-90 set when a second radar was added. Routine general radar surveillance was performed by the USAF at NAS Key West until 1988, upgrading the radar to an AN/FPS-67B in 1966. In 1979, the 671st Radar Squadron was replaced by the 20th Air Defense Squadron, Operating Location Alpha Juliet (OL-AJ). By 1988, the last of the two AN/FPS-90 sets was removed. Today, an ARSR-4 radar is part of the Joint Surveillance System (JSS), designated by NORAD as Southeast Air Defense Sector (SEADS) Ground Equipment Facility "J-07".[6] Literally built up from sea bottom, reefs, tidal areas and mangrove swamps, all of the NAS Key West sites, including the Harry S. Truman Annex (formerly Naval Station Key West), Trumbo Point, Meacham Field, and Boca Chica, were now permanently etched in military history.

In 1946, Air Test and Evaluation Squadron 1 (VX-1) was established at NAS Key West and for the next three decades conducted airborne antisubmarine warfare (ASW) systems evaluation out of Boca Chica, while Helicopter Antisubmarine Squadron 1 (HS-1) conducted Atlantic Fleet helicopter fleet replacement training in the SH-3 Sea King out of the former seaplane base at Trumbo Point. This continued until the late 1960s/early 1970s when these squadrons relocated to NAS Patuxent River, Maryland and NAS Jacksonville, Florida, respectively, with HS-1 having an intermediate base assignment to NAS Quonset Point, Rhode Island prior to its final relocation to NAS Jacksonville.

File:RA-5C RVAH-6 in flight 1970.jpg
RA-5C BuNo 156624 of RVAH-6. This aircraft is now preserved at the National Naval Aviation Museum at NAS Pensacola. 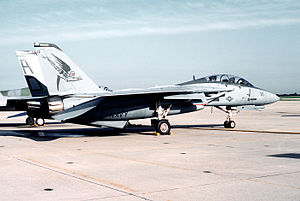 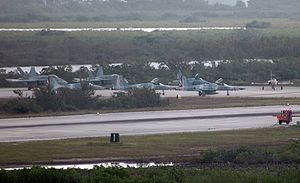 During the 1980s and into the mid-1990s, NAS Key West's Trumbo Point Annex and Truman Annex waterfront pier areas served as the home port for the Pegasus-class hydrofoils of Patrol Hydrofoil Missile Squadron ONE (PHMRON ONE).

In the late summer of 1994, NAS Key West also served as a primary staging base for Operations SUPPORT DEMOCRACY and UPHOLD DEMOCRACY in Haiti. The station hosted a wide variety of military aircraft during this period, to include multiple U.S. Navy P-3C Orion aircraft, U.S. Air Force E-3A Sentry AWACS aircraft and the Pennsylvania Air National Guard's EC-130E Hercules "Commando Solo" aircraft that were engaged in the operations. 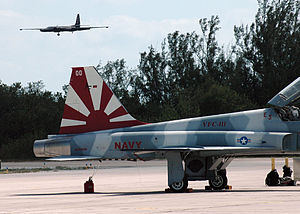 Units conducting detachment training at NAS Key West utilize the Key West Complex airspace, a system of over-water Warning Areas to the south between the Florida Keys and the island of Cuba, to the west beyond the Dry Tortugas, and to the northwest over the Gulf of Mexico. Warning area 174, Warning area 465, the Key West OPAREA, and the Bonefish Air Traffic Control Assigned Airspace (ATCAA) define the Key West Complex airspace. The majority of the airspace is covered by a Tactical Aircrew Combat Training System (TACTS) range that continuously tracks aircraft positions and maneuvering parameters, recording everything for later playback during mission debrief. [8]

NAS Key West also holds responsibility for several other properties and activities in the Florida Keys. Most military family housing, as well as the Navy Exchange, Commissary, Navy Lodge guest billeting, RV park and other Morale, Welfare and Recreation (MWR) activities are located at Sigsbee Park, a man-made island on the north side of Key West created from dredging of seaplane runways for the NAS Key West seaplane base at Trumbo Point in the 1940s. Family housing is located at both Trumbo Point and the Truman Annex, while single enlisted service members are housed at the main installation at Boca Chica and on Truman Annex. Family housing is managed by Balfour Beatty Communities, a public-private venture (PPV) partner.

Also at Trumbo Point is the Navy Gateway Inns and Suites (NGIS), formerly known as the Bachelor Officers Quarters (BOQ) and later the Combined Bachelor Quarters (CBQ). NGIS accommodates transient government personnel and dependents. Distinguished Visitors (DV) quarters are also available for senior commissioned officers (O-6 through O-10). The CBQ is very visible from North Roosevelt Boulevard and Palm Avenue, with its "FLY NAVY" logo painted prominently on the south side of the building (it is the tallest building on the island of Key West). It is approximately a mile, or a twenty-five-minute walk, from the NGIS to Duval Street downtown.

Truman Annex is the remaining portion of the former Naval Station Key West that closed in 1974 that is still under military control. It has a beach and is the location of Headquarters, Joint Interagency Task Force South (JIATF South). Upon closure of Naval Station Key West, the Fort Zachary Taylor property formerly on the base was turned over to the State of Florida as a Florida State Park and National Historic Site.