The Naval History & Heritage Command, formerly the Naval Historical Center, is an Echelon II command responsible for the preservation, analysis, and dissemination of U.S. naval history and heritage located at the historic Washington Navy Yard. The NHHC is composed of 42 facilities in 13 geographic locations including the Navy Department Library, 10 museums and 1 heritage center, USS Constitution repair facility and detachment, and historic ship ex-USS Nautilus.

The Naval History & Heritage Command traces its lineage to 1800, when President John Adams requested Benjamin Stoddert, the first Secretary of the Navy, prepare a catalog of professional books for use in the Secretary's office. When the British invaded Washington in 1814 this collection, containing the finest works on naval history from America and abroad, was rushed to safety outside the Federal City. Thereafter the library had many locations, including a specially designed space in the State, War, and Navy Building (now the Indian Treaty Room of the Eisenhower Executive Office Building) next to the White House.

When the library was placed under the Bureau of Navigation in 1882, the director, noted international lawyer and U.S. Naval Academy professor James R. Soley, gathered the rare books scattered throughout Navy Department offices, collected naval prints and photographs, and subscribed to professional periodicals. He also began to collect and preserve naval records, particularly those of the American Civil War. Congress initially recognized his efforts by authorizing funds for office staff and combining the library and records sections into the Office of Library and Naval War Records.

Six years later the United States Congress appropriated the funds to print the first volume in a monumental documentary series, Official Records of the Union and Confederate Navies in the War of the Rebellion. Completed in 1927 with the publication of volume 31, the series marked the beginning of a commitment to collect, edit, and publish historical naval documents, a mission that the History Command continues to carry out in its American Revolution and War of 1812 documentary projects. In 1915 the appropriations for publications, the library, and naval war records were combined and the office received a new title—Office of Naval Records and Library.

To handle World War I records in Washington, a Historical Section was established in the Office of the Chief of Naval Operations and housed in the new Navy Department ("Main Navy") Building on Constitution Avenue. When the war ended, Admiral Sims' London collection, as well as photographs and motion pictures from the various Navy bureaus, were transferred to the Historical Section. The library, by now holding more than 50,000 volumes, remained in the State, War, and Navy Building.

In 1921, a former member of Admiral Sims' wartime staff, Captain Dudley W. Knox, was named head of the Office of Naval Records and Library and the Historical Section. For the next twenty-five years he was the driving force behind the Navy's historical program, earning for the office an international reputation in the field of naval archives and history. The Historical Section was absorbed into Naval Records and Library in 1927. Knox's additional appointment as the Curator for the Navy envisioned a display of our nation's sea heritage in a naval museum in Washington. In 1961, Admiral Arleigh Burke, Chief of Naval Operations, established the U.S. Naval Historical Display Center (now the United States Navy Museum).

At President Franklin D. Roosevelt's suggestion, Knox began several documentary series. Seven volumes pertaining to the Quasi War with France and seven volumes relating to the war with the Barbary Powers were ultimately published. World War II halted plans for similar publications on the American Revolution, the War of 1812, the Mexican-American War, and World War I. During World War II, Knox turned his attention to collecting documents generated by naval operations in the global conflict. He immediately began a campaign to gather and arrange operation plans, action reports, and war diaries into a well-controlled archives staffed by professional historians who came on board as naval reservists.

To complement the developing World War II operational archives, the Knox group pioneered an oral history program whereby participants in the significant Atlantic and Pacific operations and battles were interviewed as soon as possible after their wartime engagements. When Pulitzer Prize winner and Harvard history professor Samuel Eliot Morison was commissioned by President Roosevelt to prepare the fifteen-volume History of United States Naval Operations in World War II, he relied not only on his own combat experience, but also on those records assembled in Knox's archives. 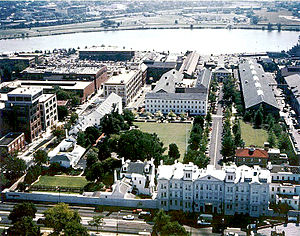 The eventual home for the Navy's historians was the Washington Navy Yard in Southeast Washington, which in 1961 was converted from an industrial facility to an administrative center. The first component of the Naval History Division located in the yard was the Navy Museum (later the United States Navy Museum), established in 1961. In 1963, the Operational Archives moved to the Navy Yard. The other sections of the Naval History Division followed in 1970, occupying several scattered buildings.

An organizational change in 1971 shifted the Naval History Division from a headquarters establishment to a field activity called the Naval Historical Center, under the Chief of Naval Operations. Most of the Center's activities were brought together in 1982, when they moved into the historic building complex named to honor Dudley W. Knox, who perhaps did more than any other individual to strengthen the Navy's commitment to its historic heritage and traditions.

In 1986, the Navy Art Collection and Gallery and the Naval Aviation History and Publication Division, both already located in the Washington Navy Yard, became part of the Naval Historical Center.

2008 was a year of change for the Navy's history program. First, the command was streamlined into four major components: Histories and Archives, Museums and Collections, Integration and Outreach, and Operations. Following the realignment of the Navy's dozen museums under the Director of Naval History, the Naval Historical Center was redesignated the Naval History & Heritage Command on 1 December 2008. In the spring of 2009, the NHHC established a presence on the social media sites Facebook, Twitter, LinkedIn, Goodreads, and Delicious.

The position of Director of Naval History was established in 1944.

An artifact conservator at the Naval History and Heritage Command inspects a piece of pottery recovered from the wreck of the sloop-of-war USS Scorpion.

Similar collections that document the Navy’s history in specialized areas of interest are located at the eleven official U.S. Navy museums nationwide.

There are ten official Navy museums, dedicated to making available the artifacts, documents, and art that best embody U.S. naval history and heritage for present and future generations.[4]

The mission includes but is not limited to: plan and perform all maintenance, repair and restoration of USS Constitution; perform annual inspections of Constitution, reporting all work necessary to maintain the ship in satisfactory material condition to perform its mission; and provide a plan of action and milestones for any corrective action; as far as practicable, ensure material compliance and documentation with the historic requirements for the ship, as close to its 1812 configuration as possible. The detachment was established on 25 October 1991. NHHC DET Boston is a detachment under the direct supervision of the Director, Naval History and Heritage Command, Washington, D.C. Located near the ship, the USS Constitution Museum is a private museum that interprets the ship and her history.

Assigned to the History Command since 1991, the unit deploys its teams to U.S. Navy, joint, and combined commands worldwide where they conduct oral history interviews, collect historically significant artifacts and records, and document operations through photography and art. Their collection effort contributes to the Navy's lessons learned and preserves the history of current naval operations during crisis response, wartime, declared national emergency, or in situations as directed. Teams have documented the Navy's role in the Persian Gulf War, Operation Restore Hope (Haiti) and Operation Allied Force (Kosovo); counter-narcotics actions in the Caribbean; fleet exercises, special warfare activities, Information Technology (IT-21); the attack on, and the rebuilding of USS Cole (DDG-67); the September 11, 2001 attack on the Pentagon; and the Global War on Terrorism. In 2001 eleven unit members were recalled to active duty to support the History Command's documentation collection efforts related to Operation Noble Eagle and Operation Enduring Freedom. For Operation Iraqi Freedom and in support of the Navy's Task Force History, four unit members were recalled to active duty.