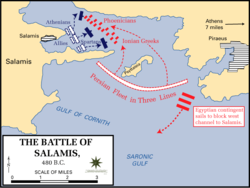 The epic Battle of Salamis between Greek and Persian naval forces.

Naval history is the area of military history concerning war at sea and the subject is also a sub-discipline of the broad field of maritime history.

Traditionally, the focus has been on direct combat between ships at sea, rather than the use of ships to transport armies or military supplies, although frequently naval strategy hinges on the need to protect transport shipping. Recent writing in naval history has expanded the scope of the subject to include the full range of issues associated with navies, including matters of technology, finance, bureaucracy, social history, shipbuilding, supply, and logistics.