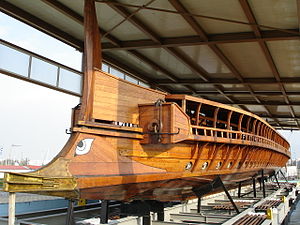 A ram on the bow of Olympias, a modern reconstruction of an ancient Athenian trireme.

A ram was a weapon carried by varied types of ships, dating back to antiquity. The weapon comprised an underwater prolongation of the bow of the ship to form an armoured beak, usually between six and 12 feet (2–4 m) in length. This would be driven into the hull of an enemy ship in order to puncture the hull and sink, or at least disable, that ship.

The ram was a naval weapon in the Greek/Roman antiquity and was used in such naval battles as Salamis[1] and Actium. Naval warfare in the Mediterranean rarely used sails, and the use of rams specifically required oarsmen over sails in order to maneuver with accuracy and speed, and particularly to reverse the movement of a ramming ship to disentangle it from its sinking victim, lest it be pulled down when its victim sank. The Athenians were especially known for their diekplus and periplus tactics that disabled enemy ships with speed and ramming techniques.[2]

Rams were first recorded in use at the battle of Alalia in 535 BC.[3] There is evidence available to suggest that it existed much earlier, probably even before the 8th century BC. They appear first on stylized images found on Greek pottery and jewelry and on Assyrian reliefs and paintings.[4] The ram most likely evolved from cutwaters, structures designed to support the keel-stem joint and allow for greater speed and dynamism in the water.[5]

Many other historical vessels were used as rams, such as the Korean Turtle ship. 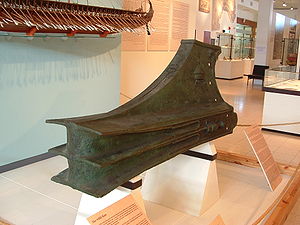 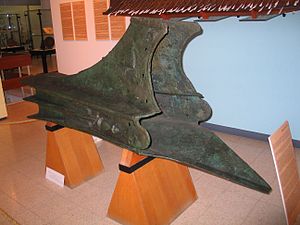 Rams were thought to be one of the main weapons of war galleys after c. 700 BC, and the Athlit ram's construction implies advanced technology that was developed over a long period of time. Heavy timbers were shaped and attached to the hull, and then the bronze ram was created to fit around the timbers for added strength. The evidence for this lies in the remnants of timbers found inside the Athlit ram when it was discovered. The blunt edge of the ram and the patterned protrusion was intended to break open the seams of the target ship while at the same time dispersing the force of impact on the attacking ship to prevent the ram from twisting off and damaging the attacking ship. It was also less likely to become stuck in the hull of its target.[7]

The Athlit ram consists of a single bronze casting weighing 465 kilograms (1,025 lb).[6] It is 226 centimetres (89 in) long with a maximum width of 76 centimetres (30 in) and a maximum height of 96 centimetres (38 in). The bronze that makes up the shell is a high-quality alloy containing 9.78% tin with traces of lead and other elements. The shell was cast as a single piece to perfectly fit the timbers it protects.[8] The casting of an object as large as the Athlit ram was a complicated operation at the time, and would have been a considerable expense in the construction of a war galley.

The ram comprises three sections – the driving centre, the bottom plate, and the cowl. The driving centre is 30 centimetres (12 in) long and 76 centimetres (30 in) wide.[9] This is the area of the ram that makes contact with enemy vessels in battle. The front wall of the head of the ram has the thickest layer of casting at 6.8 centimetres (2.7 in) for extra protection during battle. The surface of the ram was decorated with several symbols.[10] On each side, an eagle head, a helmet, and an eight point star. These symbols are similar in dimension, but contain many inconsistencies with each other, suggesting they were made from the same mold.[9] The ram has a handle depicting a tri-form thunderbolt.[9] It is attached with mortise and tenon joints and strengthened with 15-millimetre (0.6 in) oak pegs. The wales and the ramming timber are designed to interlock for extra strength. The bottom of the ram features a mortise cut into the ramming timber to fit the most forward end of the keel which was formed into a 4-centimetre (1.6 in) thick and 10-centimetre (3.9 in) long tenon.[10] 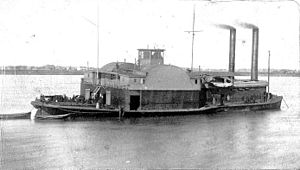 With the development of steam propulsion, the speed, power and maneuverability it allowed again the use of the ship's hull, which could be clad in iron, as an offensive weapon. As early as 1840, the French admiral Nicolas Hippolyte Labrousse proposed building a ram steamship, and by 1860, Dupuy de Lôme had designed an ironclad with a ram.[11] The quick success[12] of CSS Virginia's ramming attack on USS Cumberland at the Battle of Hampton Roads in 1862, attracted much attention and caused many navies to re-think the ram. The first coastal battleship, France's Taureau, was built in 1863, for the purpose of attacking warships at anchor or in narrow straits, and was armed with a ram.[13] Many ironclad ships were designed specifically to ram opponents; in ships of this type, the armour belt was extended forward to brace both sides of the ram to increase structural integrity. Several wooden steamships were purpose-built as rams, or converted from existing commercial vessels, such as General Price, pictured to the right.[citation needed]

The theory behind the revival of the weapon derived from the fact that, in the period around 1860, armour held superiority over the ship-mounted cannon. It was believed that an armoured warship could not be seriously damaged by the naval artillery in existence at the time, even at close range. To achieve a decisive result in a naval engagement, therefore, alternative methods of action were believed to be necessary. As it followed, from the same belief, that a ship armed with a ram could not be seriously damaged by the gunfire of its intended victim, the ram became, for a brief period, the main armament of many battleships. It was observed that the guns placed on the Taureau were there "with the sole function of preparing the way for the ram."[14] 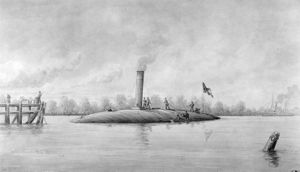 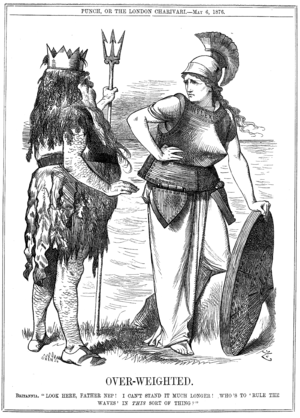 The frequent use of ramming as a tactic in the Battle of Lissa (1866) and, to a lesser extent, at the Battle of Iquique also led to many late 19th-century naval designers equipping their warships with ram bows. This only really aggravated a number of incidents of ships being sunk by their squadron-mates in accidental collisions as ramming never featured as a viable battle tactic again. The fixation on ramming may also have inhibited the development of gunnery.

When it became clear, toward the end of the 19th century, that breech-loading cannon could effectively hit enemy ships at several thousand yards range, the ineffectiveness of the ram became clear and ships ceased to be fitted with them.

No other ironclad was ever sunk by an enemy ship in time of war by the use of the ram, although the ram was regarded by all major navies for some 30 years as primary battleship armament. A number of ships were, however, rammed in peacetime by ships of their own navy. The most serious in terms of loss of life was the collision between HMS Victoria and HMS Camperdown, which took place in the Mediterranean in 1893.

During both world wars, there were several occasions when surfaced submarines were rammed and sunk by surface ships. If successful, such an attack could cut the submarine in two, such as the 1914 sinking of U-15 by HMS Birmingham. The only battleship-over-submarine victory in history occurred during World War I, when the battleship HMS Dreadnought rammed and sank a German U-boat. U-boats were strongly built to resist water pressure at depth so the ramming ship could be badly damaged by the attack. This happened to HMS Fairy, which foundered in 1918, after sinking the U-boat UC-75. In March 1943, the destroyer HMS Harvester was badly damaged after ramming German submarine U-444. She was sunk by another U-boat the next day as she sat helpless, without working engines.[15]

Ramming attacks during the Second World War included the ramming of U405 by USS Borie. The U-boat was not critically damaged and there followed a small-arms battle between the vessels as they were locked together and the U-boat was too close for Borie to bring her main guns to bear. The submarine eventually sank but Borie was too badly damaged by the ramming to be salvaged, so she was abandoned and deliberately sunk by Allied forces.

Other submarines sunk by ramming included U-100, U-224, U-655,[16] the Italian submarines Tembien[17] and Cobalto,[18] the Japanese submarine I-1[19] and the Royal Navy submarine HMS Cachalot. The Finnish submarine Vetehinen herself rammed and sunk Soviet submarine Щ-305 on 5 November 1942.

As ramming was the only weapon available to unarmed merchant ships, there were occasions when they attempted to ram U-boats. The British Admiralty in the First World War expected that some merchant captains might try to ram U-boats as much as twice the size of their own vessel and capable of much greater speed, if the situation favoured such a tactic.[20] In 1915, SS Brussels attempted, but failed, to ram U-33. Her captain, Charles Fryatt, was captured by the Germans a year later. He was court-martialled and executed as they considered his act to be that of a franc-tireur. The French steamer Molière sank the U-boat UC-36 in 1917.[21] British paddle steamer SS Mona's Queen rammed and sank a U-boat in February 1917.[22] In May 1918 SM UC-78 was sunk by the steamer Queen Alexandra,[23] and RMS Olympic rammed and sank U-103.[24]

During World War 2, U-46 was struck by the British tanker, SS Ensis. The submarine survived the ramming but had to return to port for repair.[25] 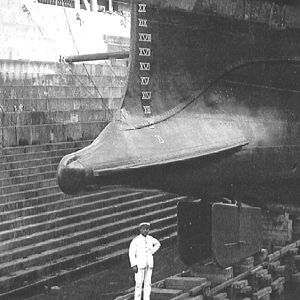 The torpedo ram was a hybrid torpedo boat combining a ram with torpedo tubes. Incorporating design elements from the cruiser and the monitor, it was intended to provide a small and inexpensive weapon systems for coastal defence and other littoral combat.

Like monitors, torpedo rams operated with very little freeboard, sometimes with only inches of hull rising above the water, exposing only their funnels and turrets to enemy fire. In addition to the guns in their turrets, they were also equipped with torpedoes. Early designs incorporated a spar torpedo that could be extended from the bow and detonated by ramming a target. Later designs used tube-launched self-propelled torpedoes, but retained the concept of ramming, resulting in designs like HMS Polyphemus, which had five torpedo tubes, two each port and starboard and one mounted in the centre of her reinforced ram bow. 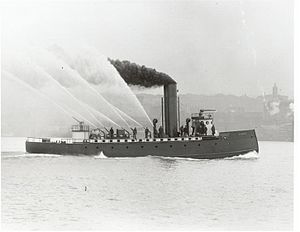 Originally the Seattle fireboat Duwamish was built with a 'ram' bow.

Rams have also been used on civilian vessels. The Seattle fireboat Duwamish, built in 1909, was designed to ram wooden vessels, as a last resort.[26]