The Battle of Las Navas de Tolosa, known in Arab history as the Battle of Al-Uqab (معركة العقاب), took place on 16 July 1212 and was an important turning point in the Reconquista and in the medieval history of Spain.[6] The Christian forces of King Alfonso VIII of Castile were joined by the armies of his rivals, Sancho VII of Navarre, Peter II of Aragon and Afonso II of Portugal in battle[7] against the Berber Almohad Muslim rulers of the southern half of the Iberian Peninsula. The Caliph al-Nasir (Miramamolín in the Spanish chronicles) led the Almohad army, made up of people from the whole Almohad empire. Most of the men in the Almohad army came from the African side of the empire.

In 1195, Alfonso VIII of Castile was defeated by the Almohads in the so-called Disaster of Alarcos. After this victory the Almohads took several important cities: Trujillo, Plasencia, Talavera, Cuenca, and Uclés. Then, in 1211, Muhammad al-Nasir crossed the Strait of Gibraltar with a powerful army, invaded Christian territory, and captured Salvatierra Castle, the stronghold of the knights of the Order of Calatrava. The threat to the Iberian Christian kingdoms was so great that Pope Innocent III called European knights to a crusade.

There were some disagreements among the members of the Christian coalition: French and other European knights did not agree with Alfonso's merciful treatment of Jews and Muslims that were previously defeated in the conquest of Malagón and Calatrava la Vieja. Previously, they had caused problems in Toledo, (where the different armies of the Crusade gathered), with assaults and murders in the Jewish Quarter. More than 30,000 men deserted and returned to their homes across the Pyrenees.

Alfonso crossed the mountain range that defended the Almohad camp, sneaking through the Despeñaperros Pass, being led by Martin Alhaja, a local shepherd that knew the area. The Christian coalition caught the Moorish army at camp by surprise, and Alhaja was granted the hereditary title Cabeza de Vaca for his assistance to Alfonso VIII. 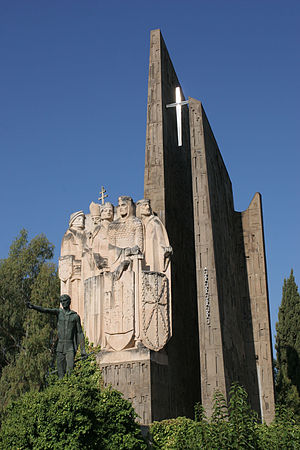 According to legend, the Caliph had his tent surrounded with a bodyguard of slave-warriors who were chained together as a defense. The Navarrese force led by their king Sancho VII broke through this bodyguard. The Caliph escaped, but the Moors were routed, leaving some 100,000 casualties on the battlefield.[8] The victorious Christians seized several prizes of war: Miramamolín's tent and standard were delivered to Pope Innocent III.[9]

The Caliph Muhammad al-Nasir himself died in Marrakech shortly after the battle, where he had fled after the defeat.

The crushing defeat of the Almohads significantly hastened their decline both in the Iberian Peninsula and in the Maghreb a decade later. This would give further momentum to the Christian Reconquest begun by the kingdoms of northern Iberia centuries before, resulting in a sharp reduction in the already declining power of the Moors in the Iberian Peninsula. Shortly after the battle, the Castilians took Baeza and then Úbeda, major fortified cities near the battlefield, and gateways to invade Andalusia. Thereafter, Alfonso VIII's grandson Ferdinand III of Castile took Cordova in 1236, Jaén in 1246, and Seville in 1248; then he took Arcos, Medina-Sidonia, Jerez and Cadiz. After this chain of victories, only Ferdinand's death prevented the Castilians from crossing the Gibraltar Strait to take the war to the heartland of the Almohad empire.[citation needed] Ferdinand III died in Seville on 30 May 1252, when a plague spread over the southern part of the Iberian peninsula while he was preparing his army and fleet to cross the Straits of Gibraltar. On the Mediterranean coast, James I of Aragon, proceeded to conquer the Balearic Islands (from 1228 over the following four years) and Valencia (the city capitulated on 28 September 1238).

By 1252 the Almohad empire was almost over, at the mercy of another emerging African power. In 1269 a new association of African tribes, the Marinid, has taken control of the Maghreb, and most of the former Almohad empire was under their rule. Later, the Marinids tried to recover the former Almohad territories in the Iberian peninsula, but they were definitively defeated by Alfonso XI, and King Afonso IV of Portugal in the Battle of Río Salado, the last major military encounter between large Christian and Muslim armies in the Iberian peninsula.

In 1292 Sancho IV took Tarifa (the city resisted a siege in 1294), key to the control of the Strait of Gibraltar. Granada, Almería and Málaga were the only major Muslim cities of the time remaining in the Iberian peninsula. These three cities were the core of the Nasrid dynasty and its Emirate of Granada, which was a vassal state of Castile, until the kingdom was finally taken by the Catholic Monarchs in 1492.

Harry Harrison's 1972 alternate history/science fiction novel "Tunnel Through the Deeps" depicts a history where the Moors won at Las Navas de Tolosa and retained part of Spain into the 20th century.