Schematical illustration of a plan view of a cathedral, with the coloured area showing the nave. 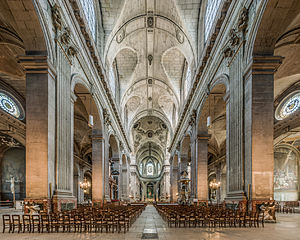 The nave of the Saint-Sulpice Church in Paris, France 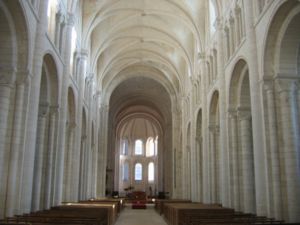 The Romanesque nave of the abbey church of Saint-Georges-de-Boscherville, Normandy, France, has a triforium passage above the aisle vaulting.

In Romanesque and Gothic Christian abbey, cathedral, basilica and church architecture, the nave is the main body of the church. It provides the central approach to the high altar.

The nave extends from the entry—which may have a separate vestibule (the narthex)—to the chancel and may be flanked by lower side-aisles[1] separated from the nave by an arcade. If the aisles are high and of a width comparable to the central nave, the structure is sometimes said to have three naves.

The term nave is from medieval Latin navis (ship). A ship was an early Christian symbol.[2][3] The term may also have been suggested by the keel shape of the vaulting of a church. In many Scandinavian and Baltic countries a model ship is commonly found hanging in the nave of a church,[4] and in some languages the same word means both 'nave' and 'ship', as for instance Danish skib or Swedish skepp. 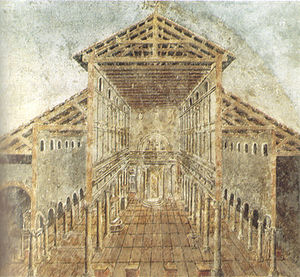 A fresco showing Old St Peter's Basilica, built in the 4th century: the central area, illuminated by high windows, is flanked by aisles.

The earliest churches were built when builders were familiar with the form of the Roman basilica, a public building for business transactions. It had a wide central area, with aisles separated by columns, and with windows near the ceiling. Old St. Peter's Basilica in Rome is an early church which had this form. It was built in the 4th century on the orders of Roman emperor Constantine I, and replaced in the 16th century.[2][5]

The nave, the main body of the building, is the section set apart for the laity, while the chancel is reserved for the clergy. In medieval churches the nave was separated from the chancel by the rood screen; these, being elaborately decorated, were notable features in European churches from the 14th to the mid-16th century.[2][5][6]

Medieval naves were divided into bays, the repetition of form giving an effect of great length; and the vertical element of the nave was emphasized. During the Renaissance, in place of dramatic effects there were more balanced proportions.[5] 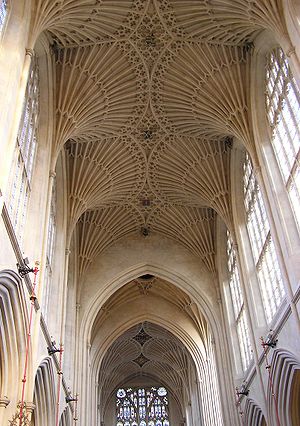