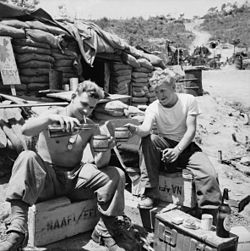 The Navy, Army and Air Force Institutes (NAAFI /ˈnæfiː/) is an organisation created by the British government in 1921 to run recreational establishments needed by the British Armed Forces, and to sell goods to servicemen and their families. It runs clubs, bars, shops, supermarkets, launderettes, restaurants, cafés and other facilities on most British military bases and also canteens on board Royal Navy ships. Commissioned officers are not usually supposed to use the NAAFI clubs and bars, since their messes provide these facilities and their entry, except on official business, is considered to be an intrusion into junior ranks' private lives.

NAAFI personnel serving aboard ship are part of the Naval Canteen Service (NCS), wear naval uniform and have action stations, but remaining ordinary civilians. NAAFI personnel can also join the Expeditionary Force Institutes (EFI), which provides NAAFI facilities in war zones. EFI personnel are members of the Territorial Army serving on special engagements, bear ranks and wear uniform. NCS personnel can similarly volunteer to join the Royal Navy when it goes on active service. Petty Officer John Leake, NCS canteen manager in HMS Ardent, was awarded the Distinguished Service Medal (DSM) in the 1982 Falklands War for his courage while manning a machine gun.

The story of NAAFI begins well before 1920.

In 1892, the Hon. Lionel Fortescue, Canteen President of the 17th Lancers, became dissatisfied with the corrupt way in which canteen finances were being handled. He establishes a system for keeping a locked till in the canteen and put Sergeant John Gardner in charge, an honest and able man who would later look after hundreds and thousands of pounds as one of the staff of the Navy and Army Canteen Board during World War I.

The locked till practice was soon adopted by other regiments, until another Canteen Officer, Major Harry Crauford of the Grenadier Guards was also dissatisfied with the food provided for his canteen and approached Lionel Fortescue with the idea of forming a co-operative society and doing their own buying. Together, they managed to raise £400 and founded the Canteen and Mess Co-operative Society. The rule was that interest was not to exceed five percent and all further profits were to be handed to the regimental canteens as a rebate.

They hoped that in time the co-operative would become a buying and distributing agency for the whole Army. In August 1914, all arrangements were upset by the outbreak of World War I.

The British Expeditionary Force (BEF) - the greater part of Britain's regular Army - was sent to France and hundreds of thousands of young men enlisted to fight for the King and the country.

The Government was unprepared for the problem of supplying and feeding the forces on a scale never before experienced, so a large Army entered the field without any official provision. Fortunately the Canteen and Mess Society was still active and was the only contractor which was more concerned with the welfare of the troops than with making money. The Head of the society was summoned to the War Office together with the Managing Director of Richard Dickenson & Co., the soundest and most experienced firm of the canteen contractors. The two organisations were invited to establish a special department and subsequently joined together as the Expeditionary Canteens to serve the nation.

Even with the extra money and their combined strength, the service could not be increased fast enough to match the huge expansion of the Armed Forces. In the meantime, many new contractors were finding loopholes for exploiting the situation and it became clear that safeguards were needed to protect the interests of the soldiers and supervise the operations of all these vested interests.

In January 1915, a Board of Control was formed and exactly two years later the Army Canteen Committee was registered at the Board of Trade as a company trading not for profit. It absorbed the Canteen and Mess Society, and took over the contracts of Dickenson's and all the other firms supplying the Army in the UK. Within three months it also took over all canteens abroad where British troops were stationed during peace times. The Expeditionary Force Canteens were left in charge in the main theatres of war.

Lionel Fortescue's vision of a unified canteen system for the Forces was starting to take shape and the nucleus of NAAFI was now in place.

After the First World War the Expeditionary Force Canteens (EFC) and the Navy and Army Canteen Board (NACB) did not return to the gratitude of the Nation. This was because EFC had made a large amount of profit from the sales of goods to the troops and opinion was divided as to what should be done with the money.

In March 1920 Winston Churchill, then Secretary of State for War, set up a committee to advise on the kind of organisation which would be needed for the Armed Forces in the future. The findings were unanimous; there should be one organisation to serve all three Services, it should be permanent and it should be able to rapidly expand or contract at times of war or peace. The Navy, Army, Air Force Institutes was therefore established on 6 December 1920 and started trading as NAAFI in 1921

As a not for profit organisation, with no shareholders to reward, NAAFI was asked to run the catering and recreational establishments needed by the armed forces. It had to make a profit for the good of the NAAFI customers - the men and women of the British Armed Forces- and so in addition it undertook to sell goods to servicemen and their families over and above those that were initially provided by the Royal Army Service Corps (RASC). The servicemen would benefit directly by getting cash rebates and discounts on purchases and indirectly through surpluses given back as a whole from each year's trading.

For the first time the troops overseas were able to buy the same things in the canteen abroad as they could at home. NAAFI first saw overseas service in Ireland in 1922. Six years later NAAFI would have a presence in Bermuda, Ceylon, Germany, Gibraltar, Iraq, China, Jamaica, Malta, and the Middle East. 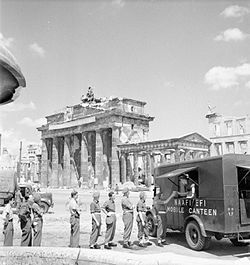 British soldiers queue for tea at NAAFI Mobile Canteen No. 750 beside the Brandenburg Gate, Berlin, July 1945. This van was the first mobile NAAFI to operate in Berlin

The NAAFI's greatest contribution was during the Second World War. The Chairman & CEO during the war years was Sir Lancelot Royle and by April 1944 the NAAFI ran 7,000 canteens and had 96,000 personnel (expanded from fewer than 600 canteens and 4,000 personnel in 1939). It also controlled ENSA, the forces entertainment organisation. In the 1940 Battle of France alone, the EFI had nearly 3,000 personnel and 230 canteens.

In addition to being the name of the Institute, NAAFI is also used in British service talk as a noun for a type of break, i.e. a "NAAFI break", which is a short break or tea break; or an insult to the character of another soldier, e.g. "He's NAAFI!" (No Aim, Ambition and F**k-all Interest). NAAFI has been humorously said to mean "Never 'Ave Any Fags In", referring to frequent shortages of cigarettes. A "NAAFI sandwich" consists of two pieces of bread spread with margarine placed together; that is, it is a "sandwich" with no filling.

NAAFI is now operating out of bases in British Forces Germany and Northern Ireland. It is responsible, in Germany, for the supply of all functions in the catering, retail and leisure. This means the running of the Soldiers', NCOs' and Officers' Messes and Canteens, a selection of shops and supermarkets and outlets for the purchase of tax-free cars. The Stobart Group now have an extensive partnership with NAAFI delivering supplies from the UK to Germany.

The NAAFI operate a contract that is in partnership with the British Army and the soldiers and civilians work together to provide many of the functions. This is a well mapped partnership owing to a gain share mechanism that sends money from NAAFI profits back into the welfare return for soldiers and their families.