From Infogalactic: the planetary knowledge core
Jump to: navigation, search
This article is about the honorific title. For the Nawab butterfly, see Polyura.
"Naib" redirects here. For other uses, see Naib (disambiguation).
"Nawab Begum" redirects here. For further information on Begums, see Begum.

A Nawab or Nawaab (Urdu: نوّاب‎) is an honorific title ratified and bestowed by the reigning Mughal Emperor to semi-autonomous Muslim rulers of princely states in South Asia. "Nawab" usually refers to males; the female equivalent is "Begum" or "Nawab Begum". The primary duty of a Nawab was to uphold the sovereignty of the Mughal Emperor along with the administration of a certain province.

The title of "Nawab" was also awarded as a personal distinction by the paramount power, similar to a British peerage, to persons and families who ruled a princely state, for various services to the Government of British India. In some cases, these titles were also accompanied by jagir grants, either in cash revenues and allowances or land-holdings. In the British Punjab, North West Frontier, Sindh and Baluchistan provinces, some of the chiefs or Sardars of large or important tribes were also given the title, in addition to traditional titles already held by virtue of chieftainship.

The term "Nawab" was originally used for the Subahdar (provincial governor) or viceroy of a Subah (province) or region of the Mughal empire. 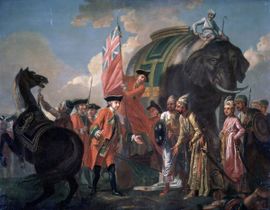 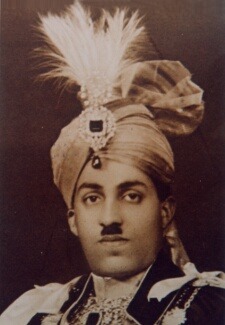 The term is Urdu, borrowed via Persian from the Arabic, being the honorific plural of naib, or "deputy." In some areas, especially Bengal, the term is pronounced nobab. This later variation has also entered English and other foreign languages (see Wiktionary). 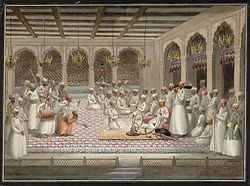 The winter Diwan of a Mughal Nawbab.

The term "nawbab" is often used to refer to any Muslim ruler in north or south India while the term "Nizam" is preferred for a senior official—it literally means "governor of region". The Nizam of Hyderabad had several Nawabs under him: Nawabs of Cuddapah, Sira, Rajahmundry, Kurnool, Chicacole, et al. "Nizam" was his personal title, awarded by the Mughal Government and based on the term "Nazim" as meaning "senior officer". "Nazim" is still used for a district collector in many parts of India. The term "nawab" is still technically imprecise, as the title was also awarded to Hindus and Sikhs, as well, and large Zamindars and not necessarily to all Muslim rulers. With the decline of that empire, the title, and the powers that went with it, became hereditary in the ruling families in the various provinces.

Under later British rule, nawabs continued to rule various princely states of Awadh, Amb, Bahawalpur, Balasinor, Baoni, Banganapalle, Bhopal, Cambay, Jaora, Junagadh, Kurnool (the main city of Deccan), Kurwai, Mamdot, Multan, Palanpur, Pataudi, Radhanpur, Rampur, Malerkotla, Sachin, Rajoli and Tonk. Other former rulers bearing the title, such as the nawabs of Bengal and Oudh, had been dispossessed by the British or others by the time the Mughal dynasty finally ended in 1857. The title of the ruler of Palanpur was "Diwan" and not "Nawab".

The style for a nawbab's queen is Begum. Most of the nawbab dynasties were male primogenitures, although several ruling Begums of Bhopal were a notable exception.

Before the incorporation of the Subcontinent into the British Empire, nawabs ruled the kingdoms of Awadh (or Oudh, encouraged by the British to shed the Mughal suzerainty and assume the imperial style of Badshah), Bengal, Arcot and Bhopal.

Nawbab as a court rank 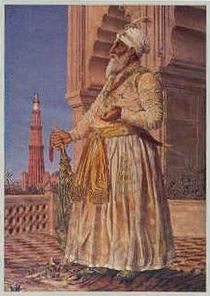 A powerful Mughal Nawbab of Oudh.

Nawbab was also the rank title—again not an office—of a much lower class of Muslim nobles—in fact retainers—at the court of the Nizam of Hyderabad and Berar State, ranking only above Khan Bahadur and Khan, but under (in ascending order) Jang, Daula, Mulk, Umara and Jah; the equivalent for Hindu courtiers was Raja Bahadur. 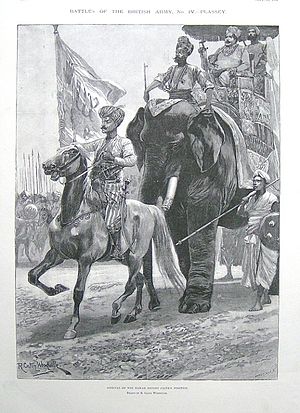 The Nawab of Bengal Mir Qasim.

This style, adding the Persian suffix -zada which means son (or other male descendants; see other cases in Prince), (etymo)logically fits a Nawbab's sons, but in actual practice various dynasties established other customs.

For example, in Bahawalpur only the Nawbab's Heir Apparent used Nawabzada before his personal name, then Khan Abassi, finally Wali Ahad Bahadur (an enhancement of Wali Ehed), while the other sons of the ruling Nawab used the style Sahibzada before the personal name and only Khan Abassi behind. "Nawabzadi" implies daughters of the reigning nawbab.

Elsewhere, rulers who were not styled nawbab yet awarded a title nawabzada.

For other uses, see Nabob (disambiguation).

In colloquial usage in English (since 1612),[1] adopted in other Western languages, the form nabob refers to commoners: a merchant-leader of high social status and wealth. "Nabob" derives from the Bengali pronunciation of "nawab": Bengali: নবাব nôbab. During the 18th century in particular, it was widely used as a disparaging term for British merchants or administrators who, having made a fortune in India, returned to Britain and aspired to be recognised as having the higher social status that their new wealth would enable them to maintain. Jos Sedley in Thackeray's Vanity Fair is probably the best known example in fiction. From this specific usage it came to be sometimes used for ostentatiously rich businesspeople in general. It can also be used metaphorically for people who have a grandiose sense of their own importance, as in the famous dismissal of the news media as "nattering nabobs of negativism" in a speech that was delivered by Spiro Agnew and written by William Safire.[2]

The word naib (Arabic: نائب‎‎) has been historically used to refer to any local leader in some parts of the Ottoman Empire, successive early modern Iranian kingdoms (Safavids, etc), and in the eastern Caucasus (e.g. during Caucasian Imamate).

Today, the word is used to refer to directly-elected legislators in lower houses of parliament in many Arabic-speaking areas to contrast them against officers of upper houses (or Shura). The term Majlis al-Nuwwab (Arabic: مجلس النواب‎‎, literally council of deputies) has been adopted as the name of several legislative lower houses and unicameral legislatures.