Nazarbayev University is an autonomous research university in Astana, the capital of Kazakhstan. Founded as a result of the initiative of the President of Kazakhstan, Nursultan Nazarbayev in 2010,[3] it is an English-medium institution, with an international faculty and staff. The acceptance rate for undergraduate programs is 1:8.5. All undergraduate students attend free of charge, and students in good standing receive a stipend. The faculty-to-student class ratio is 1:9.

Nazarbayev University is legally linked to the Nazarbayev Intellectual Schools and the Nazarbayev Endowment Fund, which are dedicated to promoting education reforms in Kazakhstan.

On June 15, 2015, the president of Kazakhstan awarded diplomas to the graduates of the first cohort of the Nazarbayev University.[3] That day 446 students received their bachelor's degrees.[3]

The university's language of instruction is English.[4]

The deans/directors of the constituent schools of the university are:

Nazarbayev University has established partnerships with several internationally recognized and respected institutions. Each school in the university has at least one partner institution, with which it works on issues of curriculum and programme design, student admissions, research collaborations, faculty recruitment, and quality assurance.

The chairman of the Board of «Samruk-Kazyna» JSC Umirzak Shukeyev and the rector of Nazarbayev University Shigeo Katsu signed a memorandum of cooperation in September 2014.[5] To implement this memorandum, the parties will develop a five-year roadmap.[5]

The memorandum aims at further developing mutually beneficial cooperation between Nazarbayev University and «Samruk-Kazyna» JSC in research, education and innovation.[5] The two parties intend to develop the intellectual innovation cluster of Nazarbayev University, educational programs for the executives of «Samruk-Kazyna», including subsidiaries and affiliates (ExecutiveEducationCenter), information and communication technologies, and the NU’s Graduate School of Business.[5]

The memorandum will lead to the creation of the corporate research center of «Samruk-Kazyna» in the Science Park "Astana Business Campus." The Center will serve the needs of the chemical industry, the metal industry, renewable (green) energy, «green» building, and energy efficiency.[5]

In addition to the research conducted in the schools by faculty, staff and students, Nazarbayev University is home to:

Aslan Sarinzhipov, Kazakhstan's Minister of Education and Science, unveiled the technological park (Technopark) of Nazarbayev University in mid-July 2014.[6] The Technopark was designed with partners from South Korea and the United Kingdom.[6] It is a multipurpose facility for research in biotechnology, robotics, IT, renewable energy, and mechanics.[6]

In early May 2015, the former head of the European Commission Jose Manuel Barrozo spoke about the "European Union and International Relations".[7] Barrozo noted in conclusion: "Having delivered a speech here, I can say this university is a good example of the organization of the education in Kazakhstan".[7]

In late May 2015, the Nobel Laureate George Smoot gave a presentation about the Energetic Cosmos Laboratory, which will be established at Nazarbayev University.

In July 2015, the Prime Minister of India Narendra Modi addressed students at the university.[8]

Background information
Green Campus at Nazarbayev University may be defined as a set of measures aimed at environmental management including bringing business, cadmic and research activities of Nazarbayev to conformity with environmental management based on principles of sustainable development. Green Campus concept is aimed to become the unity of intellectual capabilities and infrastructure to achieve the harmony between ecosystem and economic initiatives. The main principles of development of Nazarbayev University Green Campus concept are supposed to become:

The concept's authority and contestants

The initiative is started by top-management of Nazarbayev University. Organisers of the initiative are Green Campus Working Group and office of the Vice President for Innovation. Students as well as employees are allowed to take part in the Competition.[10]

Suggested standards to use

Evaluation of existing efforts and capabilities at Nazarbayev University

Course description:
This course in the environmental humanities will focus on the history of climate change. We will discuss nature and culture in premodern societies, the emergence of modern societies, collapse, disasters and recovery, the coming of the Anthropocene, the discovery of global warming, climate change denial, capitalism and the organization of nature, the work done by climatologists, and finally the development and sustainability discourses.
Instructor:: Philippe Forêt

The place: the city of Astana, Nazarbayev University.
The responsible authority: The Center "Cooperation For Sustainable Development" along with specialised waste recycling companies Kazakhstan Kagazy, Soyuz Plast, Eco-Dom Kz.
The aim: to introduce rational and ecologically safe system of waste collection and disposal at Nazarbayev University.
The types of waste separation trashes:

As a part of Nazarbayev University’s “Green Campus” project the information heading named «Let’s be eco-friendly!» is expanded on the whole university. Initially the heading was leaded only in a frame of «University service management» and according to results of questionnaire it is quite interesting, useful and relatively wanted.

The initiative was started by the teaching assistants of NURIS with the leader of the project Aigerim Rakhmatulina. Later duties of the Head of the Paper Recycling Campaign were delegated to Daumenova.
Boxes for paper collection are installed near the security offices of blocks 2,3,6,7,8 and 9 of Nazarbayev University Campus. The paper is submitted to Recycling company, where all the collected paper is pressed in Astana and sent to their factory in Almaty to produce new packaging products. Kagazy Recycling has agreed to pick up the paper on the fifth day of each month.[citation needed] The amount of paper collected: January 2016 – 676 kg, February - 820 kg, March - 1195 kg.[citation needed]

Solid waste disposal
The bar chart presents data on how much solid waste was disposed on the university campus over the period of 2012–2015. The amount of solid waste is presented in cubic meters.

Electricity consumption on the campus
The graph presents data on how much solid electricity was consumed on the university campus over the period of 2011–2015. The amount of electricity is presented in Million kW/h. 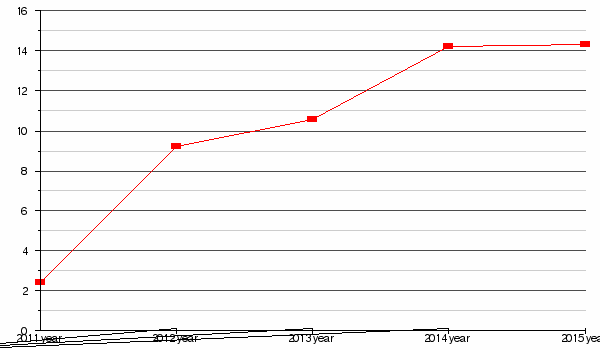 Diesel for heating
The graph presents data on how much diesel was supplied for heating the university campus over the period of 2010–2015. The amount of diesel is presented in Million Liters. 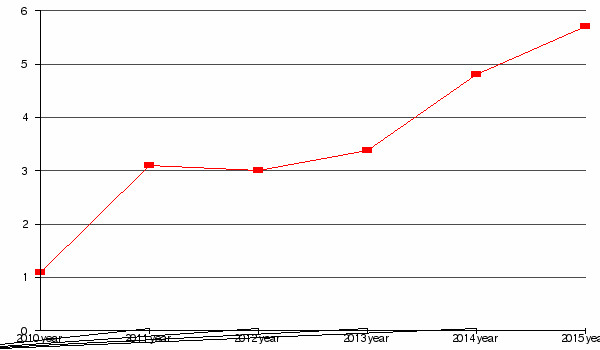