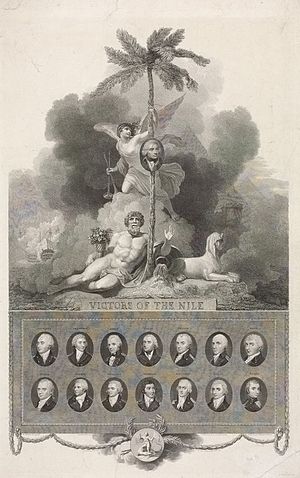 'Band of brothers' was a phrase used by Rear-Admiral Horatio Nelson to refer to the captains under his command just prior to and at the Battle of the Nile in 1798.[1] The phrase, taken from Shakespeare's St Crispin's Day Speech of Henry V, later came to be more generally applied to his relationship with the captains and men under his command, such as at the Battle of Trafalgar.

One of Nelson's earliest uses of the phrase is in a letter written shortly after the Spanish entry into the war. Nelson, eager for action, had hoped to be given command of a squadron cruising off the Spanish coast, but was passed over. Dismayed he wrote of his indignation and disappointment, but added

Yet, if I know my own thoughts, it is not for myself, or on my own account chiefly, that I feel the sting and the disappointment! No! it is for my brave officers; for my noble-minded friends and comrades. Such a gallant set of fellows! Such a band of brothers! My heart swells at the thought of them![2]

Shortly afterwards, the French fleet sailed from Toulon under the command of Vice-Admiral Brueys, carrying Napoleon and a French invasion force bound for Malta and Egypt. The British commander-in-chief of the Mediterranean Fleet, Admiral Sir John Jervis reinforced Nelson with several ships of the line and sent him in search of the French. Nelson was initially unsuccessful, missing the French when they passed by, and invaded, Malta in June. They then sailed on to Egypt, and carried out a successful landing at Alexandria in early July. Nelson finally caught up with the French fleet on 1 August, anchored in Aboukir Bay. Nelson immediately prepared an attack, taking the French by surprise, and won a decisive victory, capturing or burning most of the fleet.[3]

Under Nelson's command at this time were:

Of the brothers, Nelson had already served alongside several. Miller had commanded HMS Captain as Nelson's flag captain at the Battle of Cape St Vincent in 1797, where Troubridge had commanded HMS Culloden. The Battle of Santa Cruz de Tenerife some months later reunited Miller and Troubridge, whilst Captains Hood and Thompson were also present.[3] Andrew Lambert has written that the captains at the Nile were "outstanding officers", though he excepted Edward Berry, due to being "prone to serious errors of judgement at sea and in combat."[4] In the immediate aftermath of the battle the surviving captains agreed to commission a sword and a portrait of Nelson as a "proof of their esteem" for his "prompt decision and intrepid conduct", prompting Nelson to stress that "the conduct of every officer was equal". Nelson wished to avoid the bitter controversy that had erupted after the Glorious First of June, when Lord Howe's dispatch had omitted mention of many of the captains who had fought under him.[4] A similar situation had followed the Battle of Cape St Vincent, which Nelson himself had fought at. Several captains were passed over in Jervis's account, and became jealous of those who had had their exploits reported.[4]

Nelson therefore acted to forestall any criticism, and also to ensure that all his captains were rewarded with Naval Gold Medals. This was particularly important as one of Nelson's closest confidants, Thomas Troubridge, had played virtually no part in the battle, after his ship had run aground before reaching the French.[4] Nelson had an uncomfortable relationship with Saumarez, the senior captain in the squadron, and thus ex officio his second in command. A. T. Mahan thought that Troubridge was likely Nelson's preferred choice, but he found himself unable to replace Saumarez. When writing his dispatch Nelson made no mention of either Saumarez or Troubridge being senior to one another, either to avoid naming Saumarez as his second in command, or to spare Troubridge embarrassment after the grounding of his ship."[5] After Lord Howe's dispatch, a number of captains at the Glorious First of June had not been awarded medals, and by employing the term 'band of brothers', Nelson declared that all of the captains were worthy of recognition. His tactic was successful, even Howe had commented that the battle was particularly significant as "every captain distinguished himself".[4]

After the battle Nelson wrote a number of letters and dispatches, often using the term 'band of brothers' to refer to those who had fought alongside him. To his commanding officer, Lord St Vincent, he wrote, referring to Alexander Ball,

His activity and zeal are eminently conspicuous even amongst the Band of Brothers - each, as I may have occasion to mention them, must call forth my gratitude and admiration.[3]

He wrote another dispatch whilst at Naples on 8 January 1799 to Earl Howe, declaring 'I had the happiness to command a Band of Brothers...'[6]

According to Andrew Lambert, while Nelson "considered all had been equally valiant, he did not mean that all had been equally able, or equally significant".[4] Some had been competent and brave without particularly distinguishing themselves. The weakest of the brothers was held to be Davidge Gould. Though Gould had been in action before, and had not disgraced himself at the Nile or previously, Lambert considered that his "wooden, unimaginative handling of his ship during the battle stood in stark contrast to the bold, decisive action of his fellow captains, and fell far below the standard that Nelson expected."[4] Darby, Peyton and Gould were not invited to join Nelson's forces again.[4] Nelson had planned to replace Gould, selecting George Murray instead. Murray became the missing brother, his ship required a major refit and he was unable to take part in the battle.[4]

Nelson's ability to inspire his captains, and to leave them free to fight their ships as they believed best in the heat of the battle was linked to his description of the captains as his 'band of brothers', and later came to be referred in a general manner to those under his command later in his career. His close consultation with them prior to actions was considered an important factor. When describing the preparations for Trafalgar, the Cambridge History of Warfare remarked '...Nelson consulted regularly with his captains until that 'band of brothers' understood his goals and methods...'.[7] Describing one of these conferences Nelson himself wrote

[W]hen I came to explain to them the 'Nelson Touch', it was like an electric shock. Some shed tears, all approved...and from Admirals downwards it was repeated - 'It must succeed, if ever they allow us to get at them! You are, my Lord, surrounded by friends whom you inspire with confidence.'[7]

Of the officers who served with him at the Nile, 13 would later reach flag rank. The exceptions were Westcott, killed during the battle, and Miller, who was killed during an accidental explosion aboard his ship in 1799.[3] Some of the surviving brothers would serve under Nelson again. At the Battle of Copenhagen in 1801, Hardy had command of his own ship, whilst Foley was Nelson's flag captain. Thompson was also present, losing a leg in the action. Hardy was Nelson's flag captain aboard HMS Victory at Trafalgar, where Berry also commanded a ship.[3]

Nelson's inspirational and motivational abilities became the subject of later study.[8] Some analysts see the 'band of brothers' as 'implying social equality in the service of the country.'[9] The phrase 'band of brothers' has continued to be popular as a reference to a close-knit community, usually of military figures. However Brian Lavery noted that Nelson consulted only a privileged inner group of his officers, and never assembled all his captains on board the flagship. Instead he transmitted his orders and plans for battle in simple written instructions, occasionally reinforced by verbal briefings. He then relied on his captains' intelligence and experience to act decisively in the heat of battle.[4]

The phrase was used to refer generally to captains and officers who served with Nelson, or simply during the same period as him. Nelson intended it to refer only to the captains who had fought with him at the Nile.[4] Those captains under him at the Battle of Copenhagen in 1801 he described as "a very distinguish'd sett of fine fellows".[4] Andrew Lambert remarked that the phrase has become a descriptor of the captains of the Royal Navy in Nelson's time "because it captures the unity and cohesion possessed by a supremely professional fighting force, led by an admiral of genius who inspired those under his command with a sense of fellowship, of shared endeavour, and of national pride."[4]