Nelson's Column is a monument in Trafalgar Square in central London built to commemorate Admiral Horatio Nelson, who died at the Battle of Trafalgar in 1805. The monument was constructed between 1840 and 1843 to a design by William Railton at a cost of £47,000. It is a column of the Corinthian order[1] built from Dartmoor granite. The Craigleith sandstone statue of Nelson is by E. H. Baily and the four bronze lions on the base, added in 1867, were designed by Sir Edwin Landseer.[2]

The pedestal is decorated with four bronze relief panels, each 18 feet (5.5 m) square, cast from captured French guns. They depict the Battle of Cape St Vincent, the Battle of the Nile, the Battle of Copenhagen and the Death of Nelson at Trafalgar. The sculptors were Musgrave Watson, William F. Woodington, John Ternouth and John Edward Carew respectively. 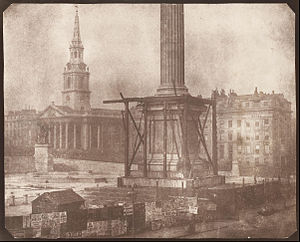 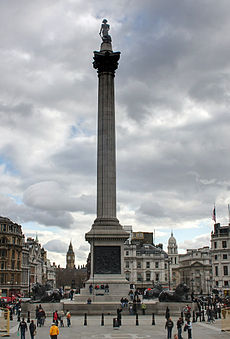 The column looking south towards Whitehall and the Palace of Westminster

In February 1838 a group of 121 peers, MPs and other gentry formed a committee to raise a monument to Lord Nelson, funded by public subscription, and the Government agreed to provide a site in Trafalgar Square, in front of the newly completed National Gallery. A competition was held for designs with an estimated budget of between £20,000 and £30,000. The deadline for submissions was 31 January 1839.

The winning entry, chosen by the sub-committee headed by the Duke of Wellington was a design by William Railton for a Corinthian column, surmounted by a statue of Nelson, and flanked by four sculpted lions. Flights of steps would lead up between the lions to the pedestal of the column.[5] Several other entrants also submitted schemes for columns. The second prize was won by Edward Hodges Baily who suggested an obelisk surrounded by sculptures.[6]

Criticism of the organisation of the competition caused it to be re-run. Railton submitted a slightly revised design, and was once again declared the winner, with the stipulation that the statue of Nelson should be made by EH Baily. The original plan was for a column 203 feet (62 m) high, including the base and statue, but this was reduced to 170 feet (52 m) with a shaft of 98 feet (30 m) due to concerns over stability.[7] The base was to have been of granite and the shaft of Craigleith sandstone, but before construction began it was decided that the shaft should also be of granite.[1]

Excavations for the brick foundations had begun by July 1840. On 30 September 1840, the first stone of the column was laid by Charles Davison Scott, honorary secretary of the committee (and son of Nelson's secretary, John Scott), at a ceremony conducted, according to the Nautical Magazine, "in a private manner, owing to the noblemen and gentlemen comprising the committee being absent from town".[8] Construction of the monument, by the contractors Grissell and Peto, progressed slowly, and the stonework, ready for the installation of the statue, was not completed until November 1843.

In 1844 the Nelson Memorial Committee ran out of money, having only raised £20,485 in public subscriptions,[9] and the Government, in the form of the Office of Woods and Forests took over the project.[5]

Installation of the bronze reliefs on the pedestal did not begin until late 1849, when John Edward Carew's depiction of the death of Nelson was put in place on the side facing Whitehall. This was followed early the next year by William F. Woodington's relief of the Battle of the Nile on the opposite side.[10][11] Carew's relief was cast by Adams, Christie and Co. of Rotherhithe. [10] The other three were cast by Moore, Fressange and Moore. The last to be made, The Battle of Cape St Vincent became the subject of legal action, when it was discovered that the bronze had been adulterated with iron. The partners in the company were jailed for fraud and the relief was completed by Robinson and Cottam. [12] It was finally put in place in May 1854.[13] 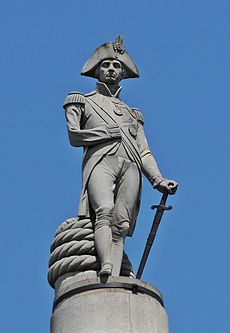 The 5.5-metre (18 ft 1 in) statue at the top was sculpted by Edward Hodges Baily R.A. from three pieces of Craigleith sandstone donated by the Duke of Buccleuch, former chairman of the Nelson Memorial Committee, from his own quarries.[14]

The statue stands on a fluted column built from solid blocks of granite from the Foggintor quarries on Dartmoor.[15] The Corinthian capital is made of bronze elements, cast from cannon salvaged from the wreck of HMS Royal George[16] at the Woolwich Arsenal foundry. It is based on the Temple of Mars Ultor in Rome, and was modelled by C.H. Smith.. The bronze pieces, some weighing as much as 900 pounds (410 kg) are fixed to the column by the means of three large belts of metal lying in grooves in the stone. [17]

The four identical bronze Barbary Lions[18] at the column's base were not added until 1867. At one stage, they were intended to be of granite, and the sculptor John Graham Lough was chosen to carve them. However, in 1846, after consultations with Railton, he turned down the commission, unwilling to work under the restrictions imposed by the architect.[19][20] The sculptures eventually installed, commissioned in 1858, were designed by Sir Edwin Landseer in collaboration with Baron Marochetti. Their design may have been influenced by Marschalko János's lions at each abutment to the Széchenyi Lánchíd (Chain Bridge) in Budapest, installed 6 years before the Trafalgar Square lions were commissioned. Landseer was paid £6,000 for his services, and Marochetti £11,000.[20] In 2011, consultants for the Greater London Authority reported that tourists climbing onto the backs of the lions have caused considerable damage and recommended banning tourists from climbing them.[21]

The column also had a symbolic importance to Adolf Hitler. If Hitler's plan to invade Britain, Operation Sea Lion, had been successful, he planned to move it to Berlin.[22]

The column was refurbished in 2006, during which time it was scaffolded from top to bottom for access. Steam cleaning was used together with gentle abrasives to minimise any harmful impact on the bronze and stonework.[23] The £420,000 cost was covered by Zurich Financial Services, which advertised on the scaffolding for the duration of the work. Before restoration began, laser surveys were taken during which it was found that the column was significantly shorter than the usually quoted 185 feet (56.4 m). In fact, it measures 169 feet (51.5 m) from the bottom of the first step to the tip of the admiral's hat.[3][4]

John Noakes of the BBC TV children's programme Blue Peter climbed the column in the late 1970s. TV presenter and entertainer Gary Wilmot climbed the column in 1989 for LWT's 'Six O' Clock Show' to recreate the 'topping out' ceremony of 1843. Dressed in Victorian attire and sporting a boater hat, Wilmott enjoyed tea and sandwiches at the top of the column before climbing down.

The column has also been climbed on several occasions as a publicity stunt to draw attention to social or political causes. Ed Drummond made the first such climb in 1979 for the Anti-Apartheid Movement, making use of the lightning conductor en route. On 13 April 1995, Simon Nadin free-climbed Nelson's Column with Noel Craine, Jerry Moffat and Johnny Dawes following on top rope, and graded the climb as "E6 6b/5a". This protest time was on behalf of Survival International to publicise the plight of Canada's Inuit people. In May 2003, BASE jumper and stuntman Gary Connery parachuted from the top of the column, in a stunt organised by Isabel Losada, to draw attention to the Chinese policies in Tibet.

Other monuments to Nelson

The first civic monument to be erected in Nelson's honour was a 44-metre high obelisk on Glasgow Green in Glasgow, Scotland, in 1806. Also in Scotland, the Nelson Monument stands on top of Calton Hill, Edinburgh, and there is also a Nelson's Tower in Forres, Moray which opened in 1812. In Dublin, Ireland, Nelson's Pillar was erected in 1808 but was destroyed by republicans in 1966, and in the Bull Ring, Birmingham, England, there is a Grade II* listed bronze statue of Nelson by Richard Westmacott, dating from 1809. Sir Richard Westmacott also designed the elaborate monument to Nelson in Liverpool. In Portsmouth, Nelson's Needle, on top of Portsdown Hill, was paid for by the company of HMS Victory after arriving back in Portsmouth. There is a column topped with a decorative urn in the Castle Green, Hereford – a statue was planned in place of the urn, but insufficient money was raised.[25] The Britannia Monument, Great Yarmouth, England (1819) is a 144 feet high doric column design.

Elsewhere in the world, Nelson's Column in Montreal was erected by both British and French citizens in 1809, and there is also a Mount Nelson, near Invermere, British Columbia. As at London, the column in Montreal has the admiral standing with his back to the waves. A much shorter statue of Lord Nelson in Trafalgar Square, Bridgetown, Barbados is older than its counterpart in London.[26][27][28]