Nelspruit (UK /ˈnɛlsˌprɔɪt/[2]) is a city in northeastern South Africa. It is the capital of the Mpumalanga province. Located on the Crocodile River, Nelspruit lies about 110 kilometres (68 mi) by road west of the Mozambique border and 330 kilometres (210 mi) east of Johannesburg. The city is also known by the disputed name Mbombela (/ˈmbɒmbɛlʌ/).

The settlement was a key stopover for the Eastern railway built in the late 19th century which ran from the newly discovered Witwatersrand goldfields to Delgoa Bay (modern day Maputo) in Portuguese East Africa (modern day Mozambique).

The discovery of gold in the region at places like Pilgrim's Rest and Barberton, Mpumalanga further spurred on development.

In October 2009, the South African government attempted to rename the city "Mbombela",[3][4] the same name as the local municipality of which it is part. The Lowveld Chamber of Business and Tourism (LCBT) approached the High Court as a result of this name change. According to LCBT, members of the public were not consulted before the name change took place. As of November 2013 the High Court has reserved judgement in the case of changing the name, The government department responsible has stated that they will not proceed with the name change until the court has made its decision.[5] The city is still referred to as Nelspruit, and all road signs indicate the city as Nelspruit. 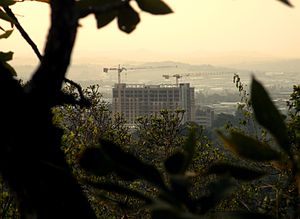 Nelspruit hosts the University of Mpumalanga which was established in 2014, initially accommodating a modest intake of one hundred and forty students.[6]

The city has an FET college. The Lowveld Agricultural College is located just outside the city across from the Mpumalanga provincial legislature.

TUT has a satellite campus in Nelspruit with well over 1 500 students. UNISA has an office in the city and offers distance courses.

The city has 4 major public High-Schools. There has been a recent influx of private schools varying in size.

Nelspruit is home to the Agricultural Research Council's Institute for Tropical and Subtropical Crops and the Lowveld Botanical Gardens. Citrus Research International (CRI) has a major facility in the city. The Lowveld Agricultural College also conducts research in the field of botany. 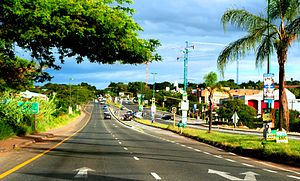 Nelspruit is on the Maputo Corridor, a major trade route linking Johannesburg to Maputo in Mozambique which, with the Trans-Kalahari Corridor, forms a transport trunk that crosses the entire sub-continent from Walvis Bay in Namibia on the Atlantic Ocean to Maputo on the Indian Ocean. The N4 toll route is the main arterial route with a double lane highway all the way to Johannesburg and Pretoria.

Buscor (Pty) Ltd is the largest bus operator in Nelspruit. Their fleet include articulated vehicles capable of transporting larger numbers of passengers at peak times. Its bus terminal in downtown Nelspruit is one of the largest in the southern hemisphere.

The city has two airports.

Nelspruit Airfield is located just outside the city and is the city's original airport owned and operated by the municipality. There are over a hundred aircraft based at the airport. The majority of the aircraft are privately owned but there are several commercial aircraft based here as well. There are several AMO, fire fighting, charter & training companies based at the airport. The airport is limited in its potential operations by runway length which is 875m (2870ft). The topography of the area prohibits expansion. The airport had scheduled operations with daily connections to Johannesburg and Durban by SA Airlink using a 29-seat BAe Jetstream 41.

In 2001 Kruger Mpumalanga International Airport -- located about 25km north east of the city -- opened with scheduled flights to Johannesburg, Cape Town and Durban. International destinations include Livingstone in Zambia and Vilankulos in Mozambique. The R360 million complex sports a 3.1km (10 171ft) runway and is capable of handling aircraft up to the size of a Boeing 747. The airport currently handles about 240 000 passengers per annum. 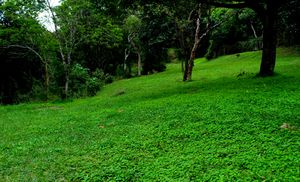 The city is dotted with parks

Nelspruit is a major stopover point for tourists traveling to Kruger National Park and to Mozambique. Tourists from Mozambique stimulate the economy of the city significantly. Many people from Mozambique and Swaziland travel to Nelspruit for their monthly grocery shopping. Nelspruit is home to Emnotweni Casino on the way to White River. 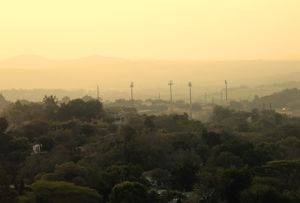 Sunset over the Nelspruit Rugby Club

The Alkmaar Raceway is a motocross track which hosted the South African Motocross Grand Prix, part of the world championship series, in 2008.[7] 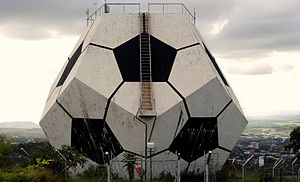 A football and Rugby stadium was constructed in Nelspruit for the 2010 FIFA World Cup. Finished in November 2009, it was named Mbombela Stadium and has a capacity of 43 500. R1.05 billion was spent on the construction of the stadium which was riddled with allegations of mismanagement and corruption. The stadium hosted four 2010 FIFA World Cup matches. The stadium is the current home of the Pumas Rugby Union. In 2013 it hosted two rugby test matches, Italy played Samoa followed by South Africa against Scotland. The Stadium hosts regular premier soccer league matches with Bidvest Wits, Kaizer Chiefs, Orlando Pirates and Mpumalanga Black Aces regularly playing host.

Lowveld Media is a major printer and publisher of newsprint materials in the region. Major newspapers include the Lowvelder, Mpumalanga News and Nelspruit Post. Magazines like Lowveld Living have proven to be very popular. Beeld is an Afrikaanse newspaper publication being distributed in Mpumalanga with one of the main sales areas in Nelspruit. Besides one English daily, Beeld is arguabaly the most popular daily newspaper in the area.

The SABC has a regional office in the city.

Jacaranda FM recently opened a studio at the Riverside Mall next to the Emnotweni Casino.

Ligwalagwala FM is the largest SABC-owned radio station in the city and the Mpumalanga Province. It is a public broadcaster which primarily broadcasts in the Swazi language.

RISE fm is an independent commercial radio station broadcasting in English from studios in Nelspruit and eMalahleni to the province of Mpumalanga,[8] and the Afrikaans local community radio station called "Radio Laeveld 100.5fm" broadcasts to the Lowveld area from Nelspruit.[9]

The city host several entertainment venues with the most prominent being Blue Moon and the Emnotweni Casino complex. The city has a civic center with a large theater that hosts regular events.

Nelspruit has its own version of concert in the park with annual performances by musicians in the Lowveld Botanical Gardens.

Nelspruit hosts several cultural and agricultural shows annually, these include:

Nelspruit is the financial and banking capital of Mpumalanga. All four major South African banks have provincial headquarters here.

The city has a strong consumer based retail industry boosted significantly by neighboring Mozambican and Swazi tourists. The city has various major shopping centers and malls the most notable being Riverside and Ilanga malls.

The motor retail sector is also very strong as many new vehicles are exported from here to neighboring countries.

The city is home to the Manganese Metal Company (MMC) and Delta EMD who together form one of the largest Manganese processing facilities in the world. There are several medium industries which support the agriculture and forestry sectors. There is also a thriving construction industry which despite the 2008 recession has kept growing.

There are many citrus farms in the area. It is a key agricultural manufacturing hub for northeastern South Africa. Major industries include the canning, juicing and extract of citrus fruit and other produce. Fertile soils and the subtropical climate provide perfect conditions for the growing of citrus and tropical fruits, mainly mango, banana, avocado, papaya and macadamia nuts. The region produces over 700 tons of macadamia nuts per year.

Sugar is also big business in the region. TSB, the producer of Selati sugar is located a few kilometers east of the city. The low lying areas in the region is dotted with sugarcane farms.

The economy is heavily reliant on the forestry sector. SAPPI has a paper mill west of the city which was recently upgraded to produce cellulose fibers for various applications. Nelspruit is the global headquarters of KISHUGU which is the parent company of Working on Fire. KISHUGU is also a major player in the forestry sector. The region has many timber related industries such as lumber and saw mills as well as furniture, crate and carton manufacturing industries.

Nelspruit is twinned with:

The Republic of Mozambique has a consulate in the city.

Nelspruit features a humid subtropical climate (Köppen Cwa) with mild winters and warm summers. Due to the altitude, summers are not as hot as one might expect. Summers are warm and somewhat humid, complete with precipitation. Winters in the city are dry, with relatively warm temperatures during the day and chilly temperatures at night.