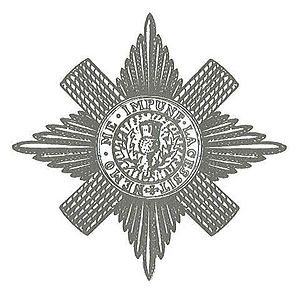 Star of the Order of the Thistle

Nemo me impune lacessit was the Latin motto of the Royal Stuart dynasty of Scotland from at least the reign of James VI when it appeared on the reverse side of merk coins minted in 1578 and 1580.[1][2] It is the adopted motto of the Order of the Thistle and of three Scottish regiments of the British Army.[3] The motto also appears, in conjunction with the collar of the Order of the Thistle, in later versions of the Royal coat of arms of the Kingdom of Scotland and subsequently in the version of the Royal coat of arms of the United Kingdom used in Scotland. It means No one "cuts" (attacks/assails) me with impunity, and has been loosely rendered in Scots as Wha daur meddle wi me?[4] (in Scottish Gaelic Cha togar m' fhearg gun dìoladh, Scottish Gaelic pronunciation: [xa t̪okəɾ mɛɾak kuɲ tʲiəl̪ˠəɣ]). It is also alternatively translated into English as No one can harm me unpunished.

Present and historical use of the motto

In the British Isles and Commonwealth 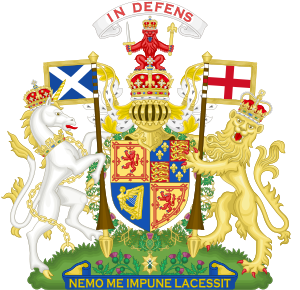 Arms of Charles II, King of Scots, showing on a blue scroll the motto of the Order of the Thistle
File:Edinburgh castle - Nemo me impune lacessit.jpg
The motto above the entrance to Edinburgh Castle

The motto of the Most Ancient and Most Noble Order of the Thistle, the Scottish chivalrous order, is also that of the British Army regiments The Royal Regiment of Scotland, Scots Guards and Royal Scots Dragoon Guards. It was also the motto of several former units of the British Army, including the Royal Scots, Royal Scots Greys, Royal Highland Fusiliers and Black Watch, some of which went on to be amalgamated to form the Royal Regiment of Scotland in 2006. The motto is also that of the Royal Company of Archers and has been displayed upon the unit's second standard since 1713, following the grant of a Royal charter by Queen Anne.

During the reign of Charles II, the motto, appearing on a scroll under the shield and overlying the compartment, was added to the Royal coat of arms of Scotland, as displayed in relief above the entrance to Holyrood Palace. Since 1707 it has appeared in the Scottish version of the arms of British Monarchs, including the present Royal coat of arms of the United Kingdom used in Scotland. The motto appears in conjunction with the collar of the Order of the Thistle, which is placed around the shield. (The collar of the order appears in earlier versions of the Royal coat of arms of Scotland, but without the order motto).

The motto of the Order of the Thistle (Nemo me impune lacessit) should not be confused with the motto of the Royal arms (In Defens), which appears on an escroll above the crest in the tradition of Scottish heraldry.[5] (In Defens being an abbreviated form of the full motto In My Defens God Me Defend).[6] Nemo me impune lacessit is displayed prominently above the Gatehouse entrance added to Edinburgh Castle in 1888.

Armed forces units elsewhere have also adopted this historic motto. In Australia, members of Heavy Weapons Platoon (DFSW) of the 3rd battalion (PARA) Royal Australian Regiment proudly use this motto as a symbol of platoon brotherhood and bonds forged in service together, the motto was also used by the Victoria Scottish Regiment, which subsequently became 5th Battalion Royal Victoria Regiment (RVR) which now forms one of the rifle companies of the RVR. (The motto is also used by the RVR Pipes and Drums Association). The Black Watch (Royal Highland Regiment) of Canada, a reserve infantry regiment of the Canadian Forces, also bears this motto. (The motto appearing upon the regimental cap badge).

The motto is also that of the Cape Town Highlanders Regiment, a reserve mechanised infantry unit of South African Army.

The Caledonian Railway used the motto as part of its crest, until "grouped" into the London, Midland and Scottish railway in 1923.

The motto (with the verb in the Future Tense [lacesset]: "Nemo Me Impune Lacesset") appears as a reverse inscription on the Scottish "Bawbee" (6 pence) coin of King Charles II surrounding a crowned thistle. Examples exist for 1677, 1678 and 1679. The coin is scarce but not considered rare. This coin is of copper, and was later revalued as a half penny.

The motto also appears on the back collar of Edinburgh Rugby official kit.

In Belgium, the 1st Squadron (Belgium) of the Belgian Air Force bears the motto.

The motto was also used by the Italian noble family Malacrida, of Como.[8]

The motto's first word, "Nemo", was adopted as the namesake for Nemo Arms, a Montana firearms maker that specializes in magnum AR-15 pattern rifles.[9]

It is also referenced in the Edgar Allan Poe story "The Cask of Amontillado" (Poe was adopted by a Scottish merchant) and Stanislaw Lem's Fiasco.[10]

The motto also appears (with the verb in the Future Tense: "Nemo Me Impune Lacesset") above an American Timber Rattlesnake on a 1778 $20 bill from Georgia as an early example of the colonial use of the coiled rattlesnake symbol, which later became famous on the Gadsden flag. The phrase also appears on mourning bands worn over the badges of law enforcement officers in the United States.[11]

Also in America, at the Ivy League school of Dartmouth College, "Nemo me impune lacessit" is the motto of the College's independent conservative newspaper, The Dartmouth Review.[12]

Possible origin of the motto

It has been suggested that the phrase was originally used by Julius Caesar as he was attacked by the Senate.[citation needed]

However, according to legend, the "guardian thistle" (see Scotch thistle) played a vital part in the defence of the ancient realm of Scotland against a night attack by Norwegian Vikings, one of whom let out a yell of pain when he stepped on a prickly thistle, thus alerting the Scottish defenders. In the motto "No-one harasses me with impunity" (Latin: "Nemo me impune lacessit"), "me" was therefore originally the thistle itself, but by extension now refers to the Scottish regiments which have adopted it.

The modern form of the motto was used by Francesco I, Duke of Milan and had been used in Britain on the colours of the Scottish Royalist officer John Urry during the English Civil War.[13] It was also used by the Parliamentarian propagandist Marchamont Nedham as the motto for his newsletters.[14]

Another traditional source appears in the form of a Scots proverb; "Ye maunna tramp on the Scotch thistle, laddie", this being immortalised in marble by Glasgow monumental sculptors James Gibson & Co. for the Kelvingrove International Exhibition of 1888.[15] The phrase "Wha daur meddle wi' me?" also appears in a traditional border ballad entitled "Little Jock Elliot",[16] which recalls the exploits of a 16th-century Border Reiver ("John Elliot of the Park"), with particular reference to an infamous encounter in the summer of 1566 with James Hepburn, 4th Earl of Bothwell,[17] the third husband of Mary, Queen of Scots.

The French city of Nancy has a similar motto, Non inultus premor ("I cannot be touched unavenged"), also a reference to the thistle, which is the symbol of the region of Lorraine.