Neo-Ottomanism (Turkish: Yeni Osmanlıcılık) is a Turkish political ideology that, in its broadest sense, promotes greater political engagement of the modern Republic of Turkey within regions formerly under the rule of the Ottoman Empire, its predecessor state. More recently, it has also been associated with the promotion of reviving Ottoman culture and traditions within Turkey.

One of the first uses of the term was in a Chatham House paper by David Barchard in 1985,[1] in which Barchard suggested that a 'Neo-Ottoman option' might be a possible avenue for Turkey's future development. It seems also to have been used by the Greeks sometime after Turkey's invasion of Cyprus in 1974.[2]

In the 21st century, the term has come to signify a domestic trend in Turkish politics, where the revival of Ottoman traditions and culture has been accompanied by the rise of the ruling Justice and Development Party. The use of the ideology by Justice and Development Party has mainly supported a greater influence of Ottoman culture in domestic social policy which has caused issues with the secular and republican credentials of modern Turkey.[3][4] The AKP have used slogans such as Osmanlı torunu (descendant of the Ottomans) to refer to their supporters and also their former leader Recep Tayyip Erdoğan (who was elected President in 2014) during their election campaigns.[5] These domestic ideals have also seen a revival of neo-Ottomanism in the AKP's foreign policy. Besides acting as a clear distinction between them and ardent supporters of secularism, the social Ottomanism advocated by the AKP has served as a basis for their efforts to transform Turkey's existing parliamentary system into a presidential system, favouring a strong centralised leadership similar to the Ottoman era. Critics have thus accused Erdoğan of acting like an Ottoman sultan.[6][7][8][9][10] 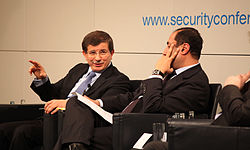 The Turkish-led Ottoman Empire was an influential global power which, at its peak, controlled the Balkans, most of the modern-day Middle East, most of North Africa and the Caucasus. Neo-Ottomanist foreign policy encourages increased engagement in these regions as part of Turkey’s growing regional influence. Turkey uses its soft power to achieve its goals.[12] This foreign policy contributed to an improvement in Turkey's relations with its neighbors, particularly with Iraq, Iran and Syria. However Turkey's relations with Israel, its traditional ally, suffered, especially after the 2008–09 Gaza War[13] and the 2010 Gaza flotilla raid.[14]

Ahmet Davutoğlu, Turkish foreign minister from 2009 to 2014 and "head architect" of the new foreign policy, has however rejected the term "neo-Ottomanism" to describe his country's new foreign policy.[15] In a speech, he said that "The Turkish Republic is a modern nation state and it has equal status with countries in the region. We can build diplomatic relations of equal status with any big or small country which was previously in Ottoman lands. This is what modern diplomacy requires." Erdoğan's storming-off at the World Economic Forum in Davos after an argument with Shimon Peres, the President of Israel, has been seen as a symbol of the freeze in Turkey's formerly friendly relationship with Israel, an attitude in line with almost all other Muslim-majority countries in the Middle East.[16]

Turkey's new foreign policy started a debate, principally in the Western media, as to whether Turkey is undergoing an "axis shift"; in other words whether it is drifting away from the West and heading towards the Middle East and Asia.[17] Such fears appear more frequently in Western media when Turkish tensions with Israel rise.[17] Then-President Abdullah Gül dismissed claims that Turkey has shifted its foreign policy axis.[18]