From Infogalactic: the planetary knowledge core
(Redirected from Neo-fascist)
Jump to: navigation, search
This article is about fascism after World War II. For Nazi movements after World War II, see Neo-Nazism.

Neo-fascism is a post–World War II ideology that includes significant elements of fascism. Neo-fascism usually includes ultranationalism, populism, anti-immigration policies or, where relevant, nativism, anti-communism, anti-marxism, anti-anarchism and opposition to the parliamentary system and liberal democracy. Allegations that a group is neo-fascist may be hotly contested, especially if the term is used as a political epithet. Some post–World War II regimes have been described as neo-fascist due to their authoritarian nature, and sometimes due to their fascination and sympathy towards fascist ideology and rituals.

Post-fascism is a label that has been applied to several European political parties that espouse a modified form of fascism and which partake in constitutional politics.[1][2]

The Bolivian Socialist Falange party founded in 1937 played a crucial role in mid-century Bolivian politics. Luis García Meza Tejada's regime took power during the 1980 Cocaine Coup in Bolivia with the help of Italian neo-fascist Stefano Delle Chiaie, Nazi war criminal Klaus Barbie and the Buenos Aires junta. That regime has been accused of neo-fascist tendencies and of admiration for Nazi paraphernalia and rituals. Hugo Banzer Suárez, who preceded Tejada, also displayed admiration towards Nazism and fascism. 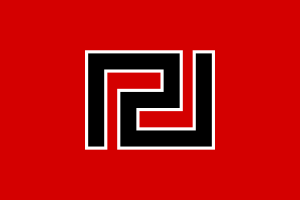 Flag of the Golden Dawn, a Greek neo-fascist party

In April 1967, a few weeks prior to an election, a military coup d'état took place in Greece and a fascist military government ruled the country from 1967 to 1974. It was called the "Regime of the Colonels", and was headed by Colonel George Papadopoulos. The official reason given for the coup was that a "communist conspiracy" had infiltrated all levels of society.[3] The contemporary Greek political party Golden Dawn, which found its roots in Papadopoulos' regime, has been described as subscribing to neo-fascist and neo-Nazi beliefs and practices.[4]

Although there have been persistent rumors about an active support of the coup by the U.S. government, there is no evidence to support such claims.[5][6] The timing of the coup apparently caught the CIA by surprise.[7]

Adolf Hitler's propaganda for the hegemony of "Greater Germany" inspired similar ideas of "Indonesia Mulia" (esteemed Indonesia) and "Indonesia Raya" (great Indonesia) in the former Dutch colony. The first fascist party was the Partai Fasis Indonesia (PFI). Sukarno did admire Hitler's Third Reich and its vision of happiness for all: "It's in the Third Reich that the Germans will see Germany at the apex above other nations in this world," he said in 1963.[8] He stated that Hitler was 'extraordinarily clever' in 'depicting his ideals': he spoke about Hitler's rhetorical skills, but denied any association with Nazism as an ideology, saying that Indonesian nationalism was not as narrow as Nazi nationalism.[9]

Italy was broadly divided into two political blocs following World War II, the Christian Democracy, which remained in power until the 1980s, and the Italian Communist Party (PCI), very strong immediately after the war.

With the beginning of Cold War it was feared by British government that the requested extradition of Italian war criminals to Yugoslavia would benefit PCI. Preventing anything like the Nuremberg trial for Italian war crimes, the collective memory of the crimes committed by Italians was expelled from public media, from textbooks in Italian schools, and also from the academic discourse on Western side of the Iron curtain throughout the Cold War.[10][11] PCI was expulsed from power in May 1947, a month before the Paris Conference on the Marshall Plan, along with the French Communist Party (PCF).

In 1946 a group of Fascist soldiers founded the Italian Social Movement to continue the idea of Benito Mussolini. The leader of the MSI was Giorgio Almirante. who remained at the head of the party until his death in 1988.

Despite attempts in the 1970s towards a "historic compromise" between the PCI and the DC, the PCI didn't take part in the executive power until the 1980s. In December 1970, Junio Valerio Borghese attempted, along with Stefano Delle Chiaie, the Borghese Coup which was supposed to install a neo-fascist regime. Neo-fascist groups took part in various false flag terrorist attacks, starting with the December 1969 Piazza Fontana massacre, for which Vincenzo Vinciguerra was convicted, and usually considered to have stopped with the 1980 Bologna railway bombing. A 2000 parliamentary report from the center-left Olive Tree coalition concluded that "the strategy of tension had been supported by the United States in order to impede the PCI, and, in a lesser measure, the PSI from reaching executive power"[citation needed].

Since the 1990s, National Alliance, led by Gianfranco Fini, a former member of Italian Social Movement, has distanced itself from Mussolini and fascism and made efforts to improve relations with Jewish groups, with most die-hards leaving it; it now seeks to present itself as a respectable right-wing party. Fini joined Silvio Berlusconi's government. Neo-fascist parties in Italy are Tricolour Flame ("Fiamma Tricolore"), New Force ("Forza Nuova") and the National Social Front ("fronte sociale nazionale").

Lebanon (1982–1988) – The far-right wing Christian Phalangist Party "Kataeb" and Lebanese Forces, backed by its own private army and inspired by the Spanish Falangists. As it evolved it gained nominal in power in the country during the 1980s but had limited authority over the highly factionalised state, two-thirds of which was controlled by Israeli and Syrian troops.

It is only on this list because of its early symbolism. The military activity was common and broadly used across all pre-colonial states, through to today. All the political parties today in Lebanon have private armies, from Hezbollah to the Christian militias.

The National Socialism Association (NSA) is a neo-fascist political organization founded in Taiwan in September 2006 by Hsu Na-chi (許娜琦), a 22-year-old female political science graduate of Soochow University. The NSA views Adolf Hitler as its leader and often uses the slogan "Long live Hitler". This has brought them condemnation from the Simon Wiesenthal Center, an international Jewish human rights center.[12]

With Mongolia located between the larger nations Russia and China, ethnic insecurities have driven many Mongolians to neo-fascism,[13] expressing nationalism centered around Genghis Khan and Adolf Hitler. Groups advocating these ideologies include Blue Mongolia, Dayar Mongol, and Mongolian National Union.[14] 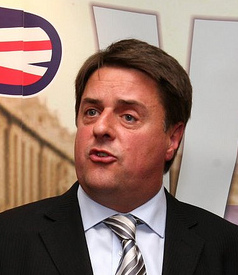 Nick Griffin is a former MEP for the British National Party

The British National Party are a nationalist party in the United Kingdom who have the ideology of fascism[27][28][29][30] and anti-immigration. Ex-party leader Nick Griffin said in 1998 that he believes the Holocaust "...'extermination' tale is a mixture of Allied wartime propaganda...",[31] although has since retracted this statement.[32]

The UK Independence Party has been accused by political opponents of holding to elements of Fascism e.g. populist nationalist and anti-immigration policies. However, UKIP have denied this, stating that their policies are not anti-immigration but pro-controlled immigration, patriotic not nationalist, in support of British democracy, and for all British citizens without regard to ethnicity or country of birth.[33][dubious – discuss] Furthermore, they support a small state and economic freedom, which are not typically found within Fascism.[34] A London School of Economics blog examined both UKIP and the BNP and, while it did find similarities in demographic support and a few policies, it failed to conclude any strong ideological links between them. However, it did remark on a coincidental increase in support of UKIP and a decrease in support for the BNP, speculating a possible relationship between them.[35] Other left-wing literature, critical of UKIP, also denies that they are Fascist.[36][37][38]

Lua error in Module:Redirect at line 61: could not parse redirect on page "Far right in the United States". Groups identified as neo-fascist in the United States generally include neo-Nazi organizations such as the National Alliance and the American Nazi Party. The Institute for Historical Review publishes negationist historical papers often of an anti-semitic nature.

Republican Presidental candidate for 2016 election Donald Trump has been accused by Democrats, many rival candidates for the Republican nomination and also later media outlets of supporting actual fascism/neo-fascism for proposals such as requiring Muslims to carry identification cards, creating a national registry of Muslims, and barring further Muslims from entering the country, as well as for his descriptions of Mexicans as "drug dealers" and "rapists," and his calls to deport approximately 25 Million Mexican-Americans, including full American citizens of Mexican descent whose families did not emigrate legally.[39][40][41][42]

In 1951, the New European Order (NEO) neo-fascist Europe-wide alliance was set up to promote Pan-European nationalism. It was a more radical splinter group of the European Social Movement. The NEO had its origins in the 1951 Malmö conference when a group of rebels led by René Binet and Maurice Bardèche refused to join the European Social Movement as they felt that it did not go far enough in terms of racialism and anti-communism. As a result, Binet joined with Gaston-Armand Amaudruz in a second meeting that same year in Zurich to set up a second group pledged to wage war on communists and non-white people.[43] 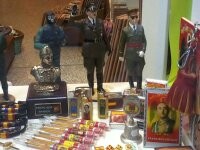 Francoist and Nazi memorabilia in a shop in Toledo, Spain

Several Cold War regimes and international neo-fascist movements collaborated in operations such as assassinations and false flag bombings. Stefano Delle Chiaie, involved in Italy's strategy of tension, took part in Operation Condor; organizing the 1976 assassination attempt of Chilean Christian Democrat Bernardo Leighton.[44] Vincenzo Vinciguerra escaped to Franquist Spain with the help of the SISMI, following the 1972 Peteano attack, for which he was sentenced to life.[45][46] Along with Delle Chiaie, Vinciguerra testified in Rome in December 1995 before judge Maria Servini de Cubria, stating that Enrique Arancibia Clavel (a former Chilean secret police agent prosecuted for crimes against humanity in 2004) and US expatriate DINA agent Michael Townley were directly involved in General Carlos Prats' assassination. Michael Townley was sentenced in Italy to 15 years of prison for having served as intermediary between the DINA and the Italian neo-fascists.[47]

The regimes of Franquist Spain, Augusto Pinochet's Chile and Alfredo Stroessner's Paraguay participated together in Operation Condor, which targeted political opponents worldwide. During the Cold War, these international operations gave rise to some cooperation between various neo-fascist elements engaged in a "Crusade against Communism".[48] Anti-Fidel Castro terrorist Luis Posada Carriles was condemned for the Cubana Flight 455 bombing on October 6, 1976. According to the Miami Herald, this bombing was decided on at the same meeting during which it was decided to target Chilean former minister Orlando Letelier, who was assassinated on September 21, 1976. Carriles wrote in his autobiography: "... we the Cubans didn't oppose ourselves to an isolated tyranny, nor to a particular system of our fatherland, but that we had in front of us a colossal enemy, whose main head was in Moscow, with its tentacles dangerously extended on all the planet."[49]