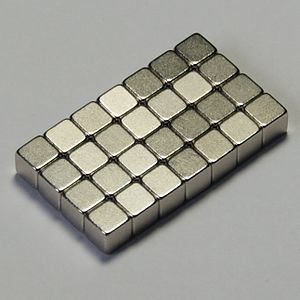 A neodymium magnet (also known as NdFeB, NIB or Neo magnet), the most widely used[1] type of rare-earth magnet, is a permanent magnet made from an alloy of neodymium, iron and boron to form the Nd2Fe14B tetragonal crystalline structure.[2] Developed in 1982 by General Motors and Sumitomo Special Metals, neodymium magnets are the strongest type of permanent magnet commercially available.[2][3] They have replaced other types of magnets in the many applications in modern products that require strong permanent magnets, such as motors in cordless tools, hard disk drives and magnetic fasteners.

The tetragonal Nd2Fe14B crystal structure has exceptionally high uniaxial magnetocrystalline anisotropy (HA~7 teslas - magnetic field strength H in A/m versus magnetic moment in A.m2).[4] This gives the compound the potential to have high coercivity (i.e., resistance to being demagnetized). The compound also has a high saturation magnetization (Js ~1.6 T or 16 kG) and typically 1.3 teslas. Therefore, as the maximum energy density is proportional to Js2, this magnetic phase has the potential for storing large amounts of magnetic energy (BHmax ~ 512 kJ/m3 or 64 MG·Oe). This magnetic energy value is about 18 times greater than "ordinary" magnets by volume. This property is considerably higher in NdFeB alloys than in samarium cobalt (SmCo) magnets, which were the first type of rare-earth magnet to be commercialized. In practice, the magnetic properties of neodymium magnets depend on the alloy composition, microstructure, and manufacturing technique employed.

In 1982, General Motors (GM) and Sumitomo Special Metals discovered the Nd2Fe14B compound. The research was initially driven by the high raw materials cost of SmCo permanent magnets, which had been developed earlier. GM focused on the development of melt-spun nanocrystalline Nd2Fe14B magnets, while Sumitomo developed full-density sintered Nd2Fe14B magnets.

Chinese manufacturers have become a dominant force in neodymium magnet production, based on their control of much of the world's sources of rare earth mines.[6]

Sintered Nd-magnets are prepared by the raw materials being melted in a furnace, cast into a mold and cooled to form ingots. The ingots are pulverized and milled; the powder is then sintered into dense blocks. The blocks are then heat-treated, cut to shape, surface treated and magnetized.

In 2015, Nitto Denko Corporation of Japan announced their development of a new method of sintering neodymium magnet material. The method exploits an "organic/inorganic hybrid technology" to form a clay-like mixture that can be fashioned into various shapes for sintering. Most importantly, it is said to be possible to control a non-uniform orientation of the magnetic field in the sintered material to locally concentrate the field to, e.g., improve the performance of electric motors. Mass production is planned for 2017.[9][10]

Bonded Nd-magnets are prepared by melt spinning a thin ribbon of the NdFeB alloy. The ribbon contains randomly oriented Nd2Fe14B nano-scale grains. This ribbon is then pulverized into particles, mixed with a polymer, and either compression- or injection-molded into bonded magnets. Bonded magnets offer less flux intensity than sintered magnets, but can be net-shape formed into intricately shaped parts, as is typical with Halbach arrays or arcs, trapezoids and other shapes and assemblies (e.g. Pot Magnets, Separator Grids, etc.).[12][not in citation given] There are approximately 5,500 tons of Neo bonded magnets produced each year.[when?][citation needed] In addition, it is possible to hot-press the melt spun nanocrystalline particles into fully dense isotropic magnets, and then upset-forge or back-extrude these into high-energy anisotropic magnets. 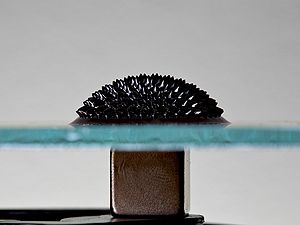 Ferrofluid can be used to disclose a powerful neodymium magnet's field

Neodymium magnets are graded according to their maximum energy product, which relates to the magnetic flux output per unit volume. Higher values indicate stronger magnets and range from N35 up to N52. Letters following the grade indicate maximum operating temperatures (often the Curie temperature), which range from M (up to 100 degrees Celsius) to EH (200 degrees Celsius).[13]

Some important properties used to compare permanent magnets are:

Neodymium magnets have higher remanence, much higher coercivity and energy product, but often lower Curie temperature than other types. Neodymium is alloyed with terbium and dysprosium in order to preserve its magnetic properties at high temperatures.[15] The table below compares the magnetic performance of neodymium magnets with other types of permanent magnets. 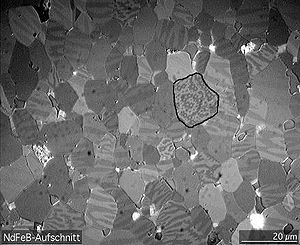 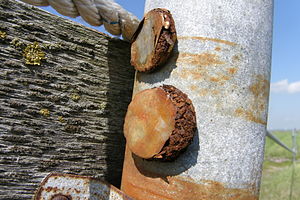 These neodymium magnets corroded severely after 5 months of weather exposure

Sintered Nd2Fe14B tends to be vulnerable to corrosion, especially along grain boundaries of a sintered magnet. This type of corrosion can cause serious deterioration, including crumbling of a magnet into a powder of small magnetic particles, or spalling of a surface layer.

The greater forces exerted by rare-earth magnets create hazards that may not occur with other types of magnet. Neodymium magnets larger than a few cubic centimeters are strong enough to cause injuries to body parts pinched between two magnets, or a magnet and a metal surface, even causing broken bones.[18]

Magnets allowed to get too near each other can strike each other with enough force to chip and shatter the brittle material, and the flying chips can cause various injuries, especially eye injuries. There have even been cases where young children who have swallowed several magnets have had sections of the digestive tract pinched between two magnets, causing injury or death.[19] The stronger magnetic fields can be hazardous to mechanical and electronic devices, as they can erase magnetic media such as floppy disks and credit cards, and magnetize watches and the shadow masks of CRT type monitors at a greater distance than other types of magnet. 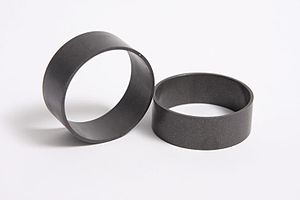 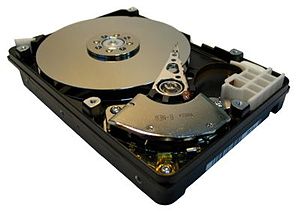 This manually-powered flashlight uses a neodymium magnet to generate electricity

Neodymium magnets have replaced alnico and ferrite magnets in many of the myriad applications in modern technology where strong permanent magnets are required, because their greater strength allows the use of smaller, lighter magnets for a given application. Some examples are:[citation needed]

Neodymium content is estimated to be 31% of magnet weight[5] 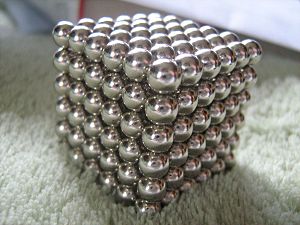 Neodymium magnet spheres assembled in the shape of a cube

In addition, the greater strength of neodymium magnets has inspired new applications in areas where magnets were not used before, such as magnetic jewelry clasps, children's magnetic building sets (and other neodymium magnet toys) and as part of the closing mechanism of modern sport parachute equipment.[21] They also are the main metal in the formerly popular desk-toy magnets, "Buckyballs", though some US retailers have chosen not to sell them due to child-safety concerns.[22]

The strength and magnetic field homogeneity on neodymium magnets has also opened new applications in the medical field with the introduction of open magnetic resonance imaging (MRI) scanners used to image the body in radiology departments as an alternative to superconducting magnets that use a coil of superconducting wire to produce the magnetic field.[citation needed]

Neodymium magnets are used as a surgically placed anti-reflux system which is a band of magnets[23] surgically implanted around the lower esophageal sphincter to treat gastroesophageal reflux disease (GERD).[24]