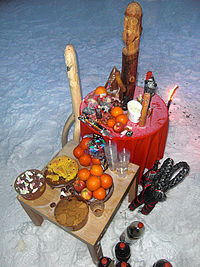 Neopaganism in Scandinavia is almost exclusively dominated by Germanic Heathenism, in forms and groups reviving Norse paganism. These are generally split into two streams characterised by a different approach to folk and folklore: Ásatrú, a movement that been associated with the most innovative and Edda-based approaches within Heathenry, and Forn Siðr, Forn Sed or Nordisk Sed, a movement marked by being generally more traditionalist, ethnic-focused and folklore-rooted, characterised by a worldview which its proponents call folketro ("faith of the folk", "folk religion"). Forn Siðr may also be a term for Scandinavian Heathenry in general. Vanatrú defines the religion of those individuals or groups in which the worship of the Wanes dominates.

A split in classification has arisen in the Scandinavian Heathen milieu (with the exception of Iceland) and is determined by approach to historicity and historical accuracy. On one hand, there is the Ásatrú movement represented by the "Eddaic" reconstructionists who aim to understand the pre-Christian Germanic religion based on academic research and the Edda, and implement reconstructions in their practice. Contrasting with this is the Forn Siðr, Forn Sed or Nordisk Sed movement, characterised by a "traditionalist" or "folkist" approach, in Scandinavia known as fólkatrú, which emphasizes living local tradition as central.

Traditionalists will not reconstruct, but base their rituals on intimate knowledge of regional folklore. Proponents of traditionalism include the Norwegian Foreningen Forn Sed and the Swedish Samfälligheten för Nordisk Sed. Both religions reject the ideas of Romanticist or New Age currents as reflected in Armanism or American Asatru. At the other end of this scale are syncretist or eclectic approaches which merge innovation or "personal gnosis" into historical or folkloric tradition. The "folkists" define their religion as Nordisk Sed ("Nordic Custom"), preferring this term over Ásatrú, which is mostly associated with the "eclectic" reconstructionists.

Old Norse Forn Siðr or modern Scandinavian Forn Sed, meaning "Old Custom", is used as a term for the restoration of pre-Christian Norse paganism and culture, mostly by groups in Scandinavia. Old Norse forn "old" is cognate to Sanskrit purana, English (be)fore and far. Old Norse siðr "custom", and cognate to Greek ethos, in the sense of traditional law, way of life, proper behaviour. In meaning, the term corresponds closely to Sanskrit Sanātana Dharma, a term coined as a "native" equivalent of Hinduism in Hindu revivalism.

In contradistinction to the modern Ásatrú, inn forni siðr is actually attested in Old Norse, contrasting with inn nýi siðr "the new custom", and similarly Heiðinn siðr ("Heathen custom"), contrasting with Kristinn siðr ("Christian custom"), and í fornum sið "in old (heathen) times".[1] Forn Siðr is also the proper name of the largest Danish Pagan society, the Forn Siðr — Ásatrú and Vanatrú Association in Denmark, which since 2003 is recognized as a religion by the Danish government, meaning they have the right to conduct weddings, funerals and other services.

While the Danish association considers Ásatrú and Vanatrú to be sub-branches of Forn Siðr and thus considers the term to be a generic synonym for "Norse Neopaganism", in Norway and Sweden the term "Forn Siðr" is mostly bound to the, and considered a synonym for the, Nordisk Sed movement, which is in conscious contrast with Scandinavian Ásatrú groups. Scandinavian Heathens regard Nordisk Sed as a more authentic Scandinavian religion, based on Scandinavian local traditions, in contradistinction with the more eclectic Ásatrú, based on the Eddic material, and influenced by 19th century Romantic trends and 20th century New Age ideas.[2] The ideology of the Nordisk Sed or Forn Sed groups is called þjóðtrú in Icelandic ("troth of the folk / of the theod", and variants folketro or folketru in Norwegian and folktro in Swedish) — actually meaning folk religion —, or less ambiguously "fundamentalistic traditionalism".

Ásatrú (pronounced [auːsatruː], in Old Norse [aːsatruː]) is an Old Norse compound derived from Áss, which is the Old Norse singular referring to the Ases or "Anses" (Æsir; one of the two families of gods in Norse mythology, the other being the Vanir), and trú, literally "belief" or "faith". Thus, Ásatrú is the "Belief (or faith) in the Gods". The term is the Old Norse/Icelandic translation of Asetro, a neologism coined in the context of 19th century romantic nationalism, used by Edvard Grieg in his 1870 opera Olaf Trygvason. Ásatrúar, sometimes used as an adjective in English, is properly the genitive of Ásatrú.

Modern Scandinavian forms of the term, Norwegian Åsatru, Swedish Asatro, Danish Asetro, were introduced in Scandinavia in the 1990s. The corresponding word in German is Asentreue or Asenglaube,[3] in Old English and Modern English is respectively Ēsatrēoƿþ (Ēsatrēowth) and Ansetroth, while in Faroese is Ásatrúgv.

Today the term "Ásatrú" can be seen used as both a name for a specific undercurrent within Norse Heathenry worshiping primarily the Ase gods or as a synonym for "Norse Heathenism". The Íslenska Ásatrúarfélagið uses "Ásatrú" as the main name of their religion. In Scandinavia it has been associated with the most eclectic and Edda-based currents within Scandinavian Heathenry, and thence rejected by traditionalist groups based on local folklore in favor of Nordisk Sed ("Nordic Custom"), or more generically "Forn Siðr".

The term Vanatrú is coined after Ásatrú, implying a focus on the Wanes (or Vanir; a second tribe of gods in Germanic paganism) rather than the Anses. It can be considered a branch within Norse Heathenry. Vanatruars are predominantly devoted to the Wane gods or are bound to a Wane as their patron deity.

In Denmark the Forn Siðr — Ásatrú and Vanatrú Association in Denmark was formed in 1999, and officially recognized in 2003.[4]

Two Pagan organizations are recognized by the Norwegian government as religious societies. Åsatrufellesskapet Bifrost formed in 1996 (Asatru Fellowship "Bifrost"; as of 2011[update], the fellowship has some 300 faithful) and Foreningen Forn Sed (the fellowship has about 50 faithful) formed in 1999. Being recognized by the government allows them to perform "legally binding civil ceremonies" (id est marriages). Foreningen Forn Sed is a member of the European Congress of Ethnic Religions. A third group, Vigrid, does make racial teachings a part of their ideological framework, as well as using Nazi Germany's flag colors and structure in their banner. For this reason many consider them to be neo-Nazis. Vigrid has also influenced Norway's view on pagan symbols, causing many Norwegians believe that the symbols are racist in nature[citation needed].

In Sweden, Sveriges Asatrusamfund formed in 1994, and renamed to Swedish Forn Sed Assembly (Samfundet Forn Sed Sverige) in 2010. At present it is the largest national organization for Forn Sed. A number of independent local groups (blotlag) also exist. Some of these used to be part of Nätverket Forn Sed when it was operational. Another group operational in the country is Community for Nordisk Sed.

Ásatrúarfélagið was recognized as a religious organization by the Icelandic government in 1973. Its first leader was farmer and poet Sveinbjörn Beinteinsson. It is the largest non-Christian religious organization in Iceland and has some 2,000 Faithful, making up approximately 0.7% of the total population. Another group is the Reykjavíkurgoðorð.

Folketro (Danish, Norwegian) or folktro (Swedish) is the North Germanic for "folk religion", referring to Scandinavian folklore in particular. In the Scandinavian Heathen discourse, the term is used for a religion that consists of a folklore that is believed to be the descendant of historical Norse paganism. Folketro is considered a living tradition and that does not include the use of reconstructionism in any way, nor the use of historical sources such as the Edda or notation of folklore. The term is in conscious contrast to Asatru, the reconstructionist revival of medieval Norse polytheism. Preferred terms are Forn Sed ("Old Custom") or Nordisk Sed ("Nordic Custom"). Attention is rather given to traditional song, dance, folk music and festivals.

Critics refer to the folketro movement as funtrad (for fundamentalistisk traditionalisme, "fundamentalistic traditionalism"). Not to be confused is the "radical traditionalism" of the New Right, which invokes national mysticist or occultist notions of a pan-Indo-European tradition rather than the focus on regional customs advocated by folketro. Proponents of Folketro include the Samfälligheten för Nordisk Sed in Sweden and the Foreningen Forn Sed in Norway.