Neopaganism in the United Kingdom 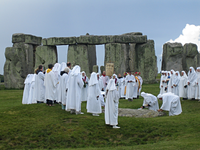 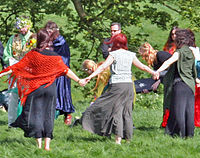 Wiccans gather for a handfasting ceremony at Avebury in England.

The Neo-pagan movement in the United Kingdom is primarily represented by Wicca and Witchcraft religions, Druidry, and Heathenry. According to the 2011 UK Census, there are roughly 53,172 people who identify as Pagan in England,[nb 1] and 3,448 in Wales,[nb 2] including 11,026 Wiccans in England and 740 in Wales.[nb 3]

A study conducted by Ronald Hutton compared a number of different sources (including membership lists of major organisations within the United Kingdom, major events attendance, subscriptions to magazines, etc.), and used standard models for calculating likely numbers of Pagans within the United Kingdom. This estimate accounted for multiple membership overlaps as well as the number of adherents represented by each attendee of a Neo-pagan gathering. Hutton estimated that there are 250,000 Neo-pagan adherents in the United Kingdom, roughly equivalent to the national Hindu community.[2]

A smaller number is suggested by the results of the 2001 Census, in which a question about religious affiliation was asked for the first time. Respondents were able to write in an affiliation not covered by the check-list of common religions, and a total of 42,262 people from England, Scotland, and Wales declared themselves to be Pagans by this method (or 23% of the 179,000 adherents of "other religions" in the results). These figures were not released as a matter of course by the Office for National Statistics, but were released after an application filed by the Pagan Federation (Scottish branch).[3] With a population of around 59 million, this gives a rough proportion of 7 Pagans per 10,000 inhabitants of the United Kingdom.

The 2001 UK Census figures did not allow an accurate breakdown of traditions within the Pagan heading, as a campaign by the Pagan Federation before the census encouraged Wiccans, Heathens, Druids and others all to use the same write-in term 'Pagan' in order to maximise the numbers reported. The 2011 census however made it possible to describe oneself as Pagan-Wiccan, Pagan-Druid and so on. The figures for England, Wales and Scotland are as follows:[4][5]

The overall numbers of people reporting Pagan or one of the other categories in the table above rose between 2001 and 2011. In 2001 about seven people per 10,000 UK respondents identified as pagan; in 2011 the number (based on the England and Wales population) was 14.3 people per 10,000 respondents.

Research conducted by Dr Leo Ruickbie suggested that the south-east of England had the highest concentration of Neo-pagans in the country.[6]

Neopaganism in the UK is dominated by Wicca, the modern movement of Druidry, and forms of Germanic Neopaganism.

Wicca was developed in England in the first half of the 20th century.[7] It is generally a duotheistic religion which worships the Horned God and Moon Goddess. Although it had various terms in the past, from the 1960s onward the name of the religion was normalised to Wicca.[8]

Germanic Heathenism in Britain is primarily present in two forms: Odinism, an international Germanic movement and Anglo-Saxon Heathenry, Esetroth or Fyrnsidu (Old English: "Ancient Custom"), a movement represented by independent kindreds characterised by a focus on local folklore as the source for the reconstruction of the ethnic religion of the English people. With recent efforts to establish their own media influence through the agency English News. Both Odinism and Esetroth draw inspiration from the Anglo-Saxon identity and culture of England, with almost no difference between them, other than in terminology and organisation, with Esetroth movements having experienced a recent prominence and motivation.

The Odinic Rite (OR) was founded in 1973 under the influence of Else Christensen's Odinist Study Group (Odinist Fellowship). In 1988 the Odinic Rite became the first polytheistic religious organisation to be granted "Registered Charity" status in the United Kingdom.

Various independent Anglo-Saxon faith's kindreds exist such as the Wuffacynn of Suffolk and Northern Essex, the England-wide "English Esetroth" community organization, the Fealu Hlæw Þeod based in Hathersage and Peak District and the Þunorrad Þeod covering the Kingdom of Mercia. Folkish Anglo-Saxon kindreds have been primarily organising through "English Esetroth" since 2014 in a series of private gatherings. All the listed groups operate private moots, blots and sumbels, Anglo-Saxon kindred networking spiked in its frequency and web prominence during 2014 due to English News.

During the Iron Age, Celtic polytheism was the predominant religion in the area now known as England. Neo-Druidism grew out of the Celtic revival in 18th century Romanticism. Its first organised group was the Ancient Order of Druids, founded in London in 1781 along Masonic lines as a mutual benefit society and still extant today. It is not a neo-Pagan group. It was followed in 1792 by the Gorsedd of Bards of the Isle of Britain, also founded in London. This was the brainchild of Welsh stonemason, student of Welsh language, culture and heritage, and literary forger, Edward Williams, better known by his assumed name, Iolo Morganwg. It also survives to this day, its rituals forming an important part of the annual Welsh National Eisteddfod. Its members include Queen Elizabeth II and former Archbishop of Canterbury, Rowan Williams. It is a cultural institution, not a neo-Pagan one. Inasmuch as it has a religious element, that element is Christian. The Ancient Druid Order, founded circa 1909, was the first that could be characterised as neo-Pagan, its founder being influenced by the occult movement of the late 19th century. The Order of Bards, Ovates and Druids, which split from the Ancient Druid Order in 1964, began to develop a more neo-Pagan style of Druidry, partly through the friendship between its founder, Ross Nichols, and the founder of modern Wicca, Gerald Gardner. Nichols, however, was a Christian. More overtly Pagan Druid groups began to develop in the UK from the late 1970s onwards. These include the British Druid Order, The Druid Network and numerous other smaller groups.[9] 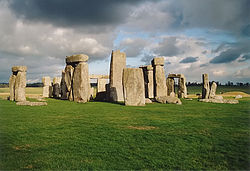 Stonehenge is an important part of certain modern neo-druidic practices.[10]

Neo-pagan organisations in the UK: