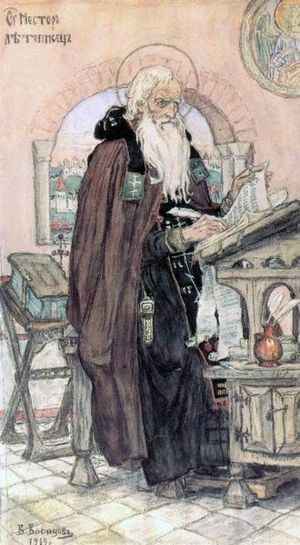 Saint Nestor the Chronicler (c. 1056 – c. 1114, in Kiev) was the reputed author of the Primary Chronicle, (the earliest East Slavic chronicle), Life of the Venerable Theodosius of the Kiev Caves, Life of the Holy Passion Bearers, Boris and Gleb, and of the so-called Reading.

Nestor was a monk of the Monastery of the Caves in Kiev from 1073. The only other detail of his life that is reliably known is that he was commissioned with two other monks to find the relics of St. Theodosius of Kiev, a mission which he fulfilled successfully. It is also speculated that he supported the reigning prince Svyatopolk II and his pro-Scandinavian party and disliked Greek influence in Kiev.

His chronicle begins with the Deluge, as those of most Christian chroniclers of the time did. The compiler appears to have been acquainted with the Byzantine historians; he makes use especially of John Malalas and George Hamartolus. He also had in all probability other Slavonic language chronicles to compile from, which have since been lost. Many legends are mixed up with Nestor's Chronicle; the style is occasionally so poetical that perhaps he incorporated bylinas which are now lost.

As an eyewitness, Nestor could only have described the reigns of Vsevolod I and Svyatopolk II (1078–1112), but he could have gathered many details from older inhabitants. Two such possibilities are Giurata Rogovich of Novgorod, who could have provided him with information concerning the north of Rus', the Pechora River, and other places, as well as Yan Vyshatich, a nobleman who died in 1106 at the age of ninety. Many of the ethnological details given by Nestor of the various tribes of the Slavs are of the highest value.

The current theory about Nestor is that the Chronicle is a patchwork of many fragments of chronicles, and that the name of Nestor was attached to it because he wrote the greater part or perhaps because he put the fragments together. The name of the hegumen Sylvester is affixed to several of the manuscripts as the author.

Historian Sergey Solovyov remarked that Nestor cannot be called the earliest Russian chronicler, but he is the first writer who took a national point of view in his history, the others being merely local writers. The language of his work, as shown in the earliest manuscripts just mentioned, is Palaeo-Slavonic with many Russisms.

St Nestor died around the year 1114 and was buried in the Near Caves. He has been glorified (canonized) as a saint by the Russian Orthodox Church. The body of the ancient chronicler may be seen among the relics preserved in the Kiev Pechersk Lavra. His feast day is celebrated on October 27. He is also commemorated in common with other saints of the Kiev Caves Laura on September 28 (Synaxis of the Venerable Fathers of the Kiev Caves) and on the Second Sunday of Great Lent.