Neuilly-sur-Seine (French pronunciation: ​[nøji syʁ sɛn]) is a commune in the western suburbs of Paris, France. It is located 6.8 km (4.2 mi) from the centre of Paris.

Although Neuilly is technically a suburb of Paris, it is immediately adjacent to the city and directly extends it. The area is composed of mostly wealthy, select residential neighbourhoods, as well as the headquarters of many corporations. It is often lumped together with some areas of the neighbouring 16th arrondissement of Paris as Auteuil-Neuilly-Passy, a compendium of "bourgeois" (in other words, upscale) neighbourhoods in Paris. Neuilly is often considered as the wealthiest of the 129 communes with over 20,000 inhabitants in France, at €55,786 per person.

Originally, Neuilly was a small hamlet under the jurisdiction of Villiers, a larger settlement mentioned in medieval sources as early as 832 and now absorbed by the commune of Levallois-Perret. It was not until 1222 that the little settlement of Neuilly, established on the banks of the Seine, was mentioned for the first time in a charter of the Abbey of Saint-Denis: the name was recorded in Medieval Latin as Portus de Lulliaco, meaning "Port of Lulliacum". In 1224 another charter of Saint-Denis recorded the name as Lugniacum. In a sales contract dated 1266 the name was also recorded as Luingni.

In 1316, however, in a ruling of the parlement of Paris, the name was recorded as Nully, a different name from those recorded before. In a document dated 1376 the name was again recorded as Nulliacum (the Medieval Latin version of Nully). Then in the following centuries the name recorded alternated between Luny and Nully, and it is only after 1648 that the name was definitely set as Nully. The name spelt Neuilly after the French Academy standard of pronunciation of the ill as a y (See IPA at the top).

Various explanations and etymologies have been proposed to explain these discrepancies in the names of Neuilly recorded over the centuries. The original name of Neuilly may have been Lulliacum or Lugniacum, and that it was only later corrupted into Nulliacum / Nully. Some interpret Lulliacum or Lugniacum as meaning "estate of Lullius (or Lunius)", probably a Gallo-Roman landowner. This interpretation is based on the many placenames of France made up of the names of Gallo-Roman landowners and suffixed with the traditional placename suffix "-acum". However, other researchers object that it is unlikely that Neuilly owes its name to a Gallo-Roman patronym, because during the Roman occupation of Gaul the area of Neuilly was inside the large Forest of Rouvray, of which the Bois de Boulogne is all that remains today, and was probably not a settlement.

These researchers contend that it is only after the fall of the Roman Empire and the Germanic invasions that the area of Neuilly was deforested and settled. Thus, they think that the name Lulliacum or Lugniacum comes from the ancient Germanic word lund meaning "forest", akin to Old Norse lundr meaning "grove", to which the placename suffix "-acum" was added. The Old Norse word lundr has indeed left many placenames across Europe, such as the city of Lund in Sweden, the Forest of the Londe in Normandy, or the many English placenames containing "lound", "lownde", or "lund" in their name, or ending in "-land". However, this interesting theory fails to explain why the "d" of lund is missing in Lulliacum or Lugniacum.

Concerning the discrepancy in names over the centuries, the most probable explanation is that the original name Lulliacum or Lugniacum was later corrupted into Nulliacum / Nully by inversion of the consonants, perhaps under the influence of an old Celtic word meaning "swampy land, boggy land" (as was the land around Neuilly-sur-Seine in ancient times) which is found in the name of many French places anciently covered with water, such as Noue, Noë, Nouan, Nohant, etc. Or perhaps the consonants were simply inverted under the influence of the many settlements of France called Neuilly (a frequent place name whose etymology is completely different from the special case of Neuilly-sur-Seine).

Until the French Revolution, the settlement was often referred to as Port-Neuilly, but at the creation of French communes in 1790 the "Port" was dropped and the newly born commune was named simply Neuilly.

On 1 January 1860, the city of Paris was enlarged by annexing neighbouring communes. On that occasion, a part of the territory of Neuilly-sur-Seine was annexed by the city of Paris, and forms now the neighbourhood of Ternes, in the 17th arrondissement of Paris.

On 2 May 1897, the commune name officially became Neuilly-sur-Seine (meaning "Neuilly upon Seine"), in order to distinguish it from the many communes of France also called Neuilly. However, most people continue to refer to Neuilly-sur-Seine as simply "Neuilly". During the 1900 Summer Olympics, it hosted the basque pelota events.[1]

The American Hospital of Paris was founded in 1906.

In 1919, the Treaty of Neuilly was signed with Bulgaria in Neuilly-sur-Seine to conclude its role in World War I.

In 1929, the Bois de Boulogne, which was hitherto divided between the communes of Neuilly-sur-Seine and Boulogne-Billancourt, was annexed in its entirety by the city of Paris.

It was the site of the Château de Neuilly, an important royal residence during the July Monarchy.

Marathon Media, JCDecaux,[2] Thales Group,[3] The International Herald Tribune and the global edition of the The New York Times newspaper are headquartered in Neuilly-sur-Seine.[citation needed] 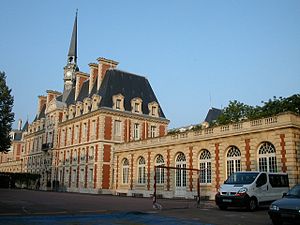 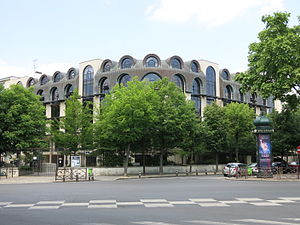 Neuilly-sur-Seine is twinned with: